You Can't Take the Scotch Out of the Double

I decided to play Scotch Doubles this year at the 2014 BCAPL Texas State 8-Ball Championships.

I just needed to find a partner.  Luckily he said yes!  As I wrote last week how I played with league-mate and top shooter of our league, Marty.

We didn't play one single game together, as we lived over an hour from each other.  The morning of the event, we each practiced alone to get used to the tables, not each other.  I knew we both knew 8ball well so wasn't worried about that part at all.  For long-tome readers, you've heard my philosophy on practicing for scotch doubles.

This was a Tuesday, and Wed and Thu was singles, teams was Fri, Sat and Sunday. So, we had to wait on other doubles teams to finish among all those other events, to see who we would meet in the finals.

The finals finally started about 2pm on Sunday.

I had played badly the last 3 games out of 4 in our last match in my women's team event and barely won those 3 games. Playing badly all of a sudden shook me up a little.  So, I could tell (and was worried) I wouldn't play well in scotch doubles, even though I had done good just 5 days before.

Our opponents would have to double dip us.  And they also had to race to one extra game.

We got up 3-1 in the first set (we would have to race to 4 the first set), but they really, really came with it to win the next 3 games to win the first set.  The Advanced player came with some amazing shots!  Marty and I thought for sure we would get a shot at the table but he would make these fantastic caroms and shots to win, and she would make great banks to set him up on other great shots.  We didn't really have much a chance once they got to the table.

I felt bad I tried this one bank and sold out - then they won those next 3 games.  :(

Being on the TV table makes for embarrassment run through your veins, too.  It sucked - my knees were weak and shaky.  Ugh!

In the next set, the race is now one game shorter.  We go to 3, they 4.  WOW that's a short race.  But the match seemed to last very long in my mind for some reason.

The first game we run out after a chance at the table!  The next game we are running out and I miss the freaking 8ball in the side! OMG.  :(  I felt uncomfy too - I should have stood back up.

We had another chance but I missed a simple little shot to try and get shape on two balls.  UGH!  We find ourselves down 1-2.  :(  When in reality, we should have already won.

I kept trying not to freak out, but I was.  Then they won another.  And another.  YIKES!

Marty would tell me, "I'm still happy to be here in this position with you (the finals)."  I smiled with his comforting words.

And he would tell me after I missed the 8ball and apologized, "You are still a Texas State Champion."  I was like, oh yea!  lol.  He was a very calm partner.  Not only with words, but smooooth as silk on the table.  Truly a joy to play with.

We finally get a shot at the table and I'm left with a VERY tough 8 ball.... and I miss.  But it really was SUPER tricky.  I had to thin cut the 8... and not scratch.  Even though it's my fav shot, the nerves could not keep me steady... and I missed :(

I left them a bank and the male player shook his head as he approached the table and looked at the bank I left him.  But he hit it perfectly playing a two-way shot.  He missed it barely and left the cue ball on the other end of the table.  But..... it scratched!  OMG a roll!

Now it's hill-hill!  Still a little life in us.  Whew!

I was still upset at my "easy" misses as I stood there watching them run out after our dry break.  :(  Again they each came with good shots as they continued to play well together.

Then!  We caught a break when the male player had to jump for his last ball.  I couldn't believe we had a chance again!

I was a nervous wreck - I didn't want to dog it any more than I already had.  UGH.

First shot I had was a ball-in-hand safe.  I don't stop my ball well but this time I gave it all my might and actually stopped the ball perfectly nudged between the rail and the 8ball so they couldn't hit their last stripe. 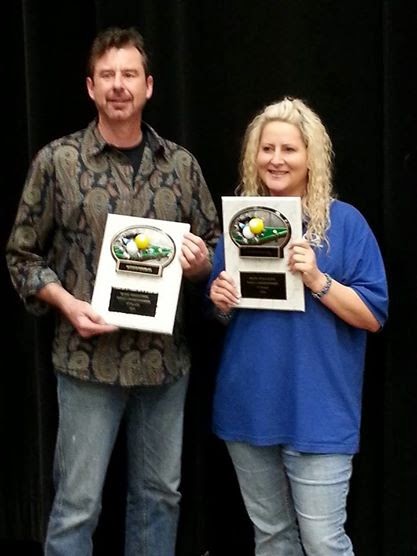 I'm still in shock how we won!  I did play some good safes, I suppose, and obviously I made some good shots, not just missed those few, but I just can't believe we won because it seemed like we were "done" so many times.

All week, anytime someone asked me who my partner was, each person said Marty would be a great partner, and he was!  He was calm, cool, collected, played REALLY well and smart, and had a very solid and smooth stroke.  And he knows the game VERY well.  I learned a lot from him which will lead to a future exciting blog post (to come).

Marty said it himself when he said "We did not have any free rides.  Three double-hill matches out of six on our way to the finals.  Then two more double-hills with the second place team.  But we kept shooting, never gave up, and prevailed in the end."

What an honor!  I'm so glad he said yes when I asked him to play! 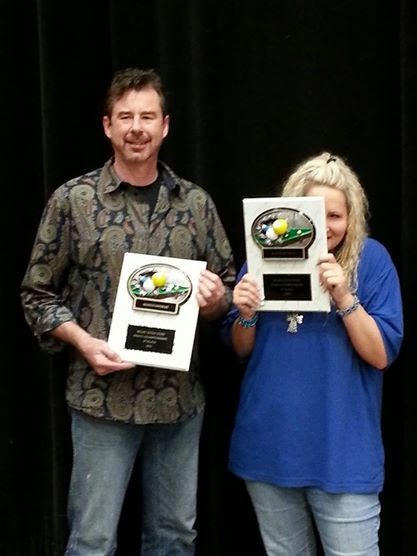