I have said this a thousand times, and have kinda proven it helps, but people still don't do anything about it.

I have recommended to help your 8-ball game to read the 8-ball portion of Play Your Best Pool by Phil Capelle. 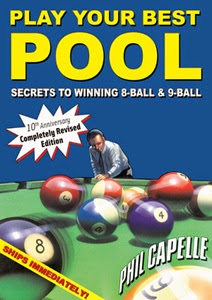 I became a Master player in 2002 because I read the book.

After a hiatus from competing, I was moved back down to the Open, but then I re-read that 8-ball section several times and won ACS Texas State Women's Singles in 2011, and then won BCAPL Nationals Women's Team event in 2012 and 2013.

And most recently, placed first at 2014 BCAPL Texas State Championships.

I am more agitated about all this because of two recent things:

(1)  I saw the way some players played at the BCAPL Texas State 8-Ball Championships, and
(2)  A recent post on FB got me all riled up, lol.

(1) I was very perturbed as I sat there at the tourney and watched players do all sorts of crazy things because they have not learned how to play 8-ball.  It can't be learned from 9ball or by playing league.  I played for 12 years and never knew these things about 8-ball, UNTIL I read just that small section of his book.

And I do not really like to read - and it's a VERY easy read!

Every page has a diagram on it, and Phil Capelle explains what you should or should not do in certain circumstances.

For instance, I saw these things at the tourney (and also during league):

The book helps so much of what I did not know and would NEVER have known just by playing league or even just playing in tournaments.

Now, I'm not saying there is only ONE correct way, but there are very obvious choices at certain times in a match that a lot of players still do not know.

How are we suppose to really understand these amazing things about 8-ball on our own?  It's strategy, which is why I love 8-ball.

And I think the MAIN reason I saw all this this past week is b/c I refreshed myself on 8-ball extensively before the tourney by reading his 8-ball section twice.  So, it was all very fresh in my mind.

I swear I feel like I should put on a little clinic, lol!

OMG, I was SO shocked by some of the responses!


OMG people!  Those reasons are NOT why his 9ball game is better and those things will NOT help his 8ball game.

I know I sound passionate and a little harsher than normal above, but I am frustrated because the answer is so simple, really.

And here is a perfect example:

A friend of mine (Cindy) posted on Facebook during the same tourney a few times about defense:  "I have decided it is just going to be a defensive weekend. "  And "...shot like crap had to play defense just to win."

Her and I talked about this in between matches and she said she's finally figured out what I've been trying to say for the last couple of years (lol) about defense and strategy in 8-ball.  She played in the B-Division and placed an impressive SECOND!

I asked her about Phil's Book for this blog entry (so you don't think it's all coming just me, lol):

"I took up pool very late in my life (August 2010) and was reading quite a bit of information but I was all over the place and was trying to do things way over my head. Then Melinda Bailey came along and suggested Phil Capelle's books. First thing I noticed was how it was laid out. It didn't matter whether I was a beginner or advance player; it was perfect. The suggestions asking yourself why for things such as missing a shot or losing a game. It mentally prepares your mind if you can take the time to read sections before tournament play. Before reading the books, I would look at the table like it was a bunch of skittles. No plan or map. I still have a lot of work to do but I am getting there. To sum it up in a couple of sentences, his books have helped me mentally, strategically, and with my confidence. It has slowed my game down which allows me to make better decisions at the table."

Now, I am not saying you will magically become an 8-ball beast. You still need to have good fundamentals and still be able to make shots.  But even if you don't have those things, you will see an 8-ball layout in SUCH a different light.  You will see things not many people see.  You will love the game more because you understand it more.  And you WILL win more games.

Because I am such a firm believer that it will help, I will do this:  If you buy Play Your Best Pool by Phil Capelle online, shoot me an email and then I will GIVE you $7!  I am serious!

I have some on-hand because I am Phil's webmaster.  If you buy it from me in person, you will get an even bigger discount, but obviously not everyone lives in the DFW-area.

Either way, I'll either give you money or give you a discount.

Please help yourself people!  You will THANK me, and be much happier with your game.  I PROMISE.

wow....I learned a lot just by reading what you wrote! thank you for sharing!