On Friday morning, April 4th, I got a text from my good friend Rebecca in the morning, "How do you feel?" she asked me.

I texted it right away with no thought.  Why?  Because I finally felt like a champ!!

It took Susan Lucci 18 years to win her Emmy.  It took me about 8 years to win the all-sought-after title I've always wanted to win, and always talked about it in my blog every year around April.

This is of course the BCAPL Texas State 8-Ball Championships tournament.  The one I have wanted to win so many years in a row; the one my friend Monica always told me: "you are the one to beat"; the on where I ALWAYS mentally psyched myself out and got jitters and could not win because I wanted it so badly I didn't play pool - I put too much pressure and "want" on myself.

As I mentioned before the tournament, I hadn't been playing too much pool, so I wasn't really prepared (I thought) but I did refresh on my mental toughness and 8-ball strategy (that I have hammered over and over already lol).

But why was this year different?  I can only guess:


I don't like to look at the brackets, but while I was resting in the hotel room about 2 hours before the women's singles division started, I see someone tagged me on Facebook and said they were playing me first on the stream.  Well, so much for not wanting to know who I play, lol!

I played that friend first and her game has improved so much and I was nervous, but I was somehow able to win.

So I say, "Well, what's your name?" And then wished her a good match.

And good match it was!

She would tell me throughout the entire match how nervous she was to play me.  And I could see she was nervous.  But I tell you what - she played JAM up!  She was the only player to go to the hill with me and I honestly thought I was going to lose.

I was up 2-0 then 3-1, but then she she surprised me and broke and ran, ran a rack on my dry break, and then ran again after what I thought was a good safe.  She made a ball hill-hill and I saw her out and thought I was DONE.  But, I couldn't be upset - she played GOOD! 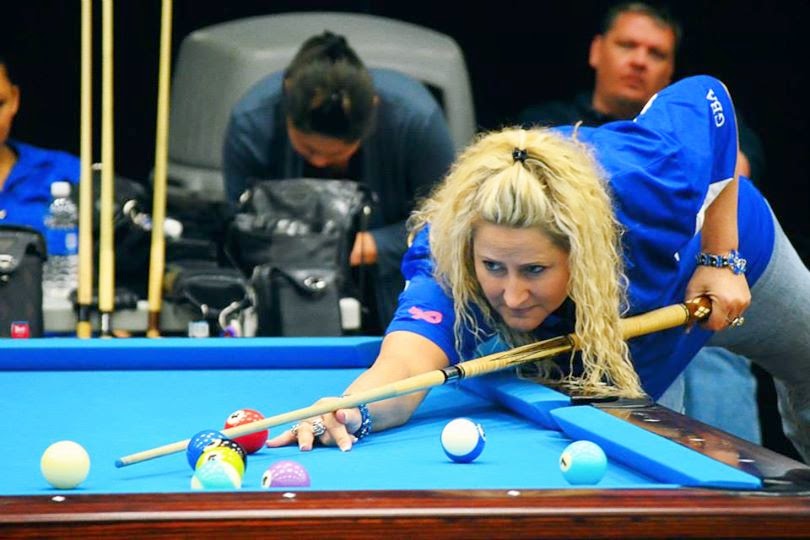 But, I was able to get to the table again and after a few safes back and forth, I finally won.  OMG I became very nervous as she kept getting out and getting out.  But I was able to hold it together and tell myself I wasn't doing anything wrong, just keep at it if I got another opportunity to play.

I want to take a minute to give her a shout out as she placed a VERY impressive 4th in this event!  Congrat's Jody!

In my 3rd match, I go up 2-0 against a good friend and good player, but then I make silly, stupid mistakes.  I get upset with myself, but try to reflect on what is happening so I can get back into the game right away.  I didn't want to lose because I was making mistakes!  Just like Brad Gilbert talks about in Winning Ugly.

I realized I was distracted and moved chairs so I could regroup and refocus because the score was 2-2 and I did NOT want her on the hill first!  Esp after being up 2-0!  I then won 4-2 by refocusing and figuring things out.

As this tourney was in Texas, I would have to play yet another friend!  We had a great match and she has improved a lot as well.  I won 4-1 I think.

I then have a VERY long wait ahead of me as the match I was waiting on hadn't even started yet.  I had my friend Dana go check the brackets to see what table I would be on, as I didn't want to see where I was on the bracket.

I waited and waited.

I finally had an opponent, fellow National Teammate, Tracie Voelkering, who won this event last year.  So I knew my hands were full.  But her and I are such good friends, we were just happy we were both still doing well!

As what happened a few matches before, I got ahead 2-0, but then lost focus.  Ugh.  I started to make really stupid mistakes and reminded myself to figure out what was going on.  Get mentally tough again and stop being distracted.  But those mistakes cost me my lead and now the score was 2-2.  I could feel the tourney slipping away from me again like always!

I recalled Brad Gilberts' words of advice and refocused.  Recognizing early I needed to not get comfortable I was ahead and instead refocus deeply again.  As before, I didn't want my opponent on the hill first after I was playing so good to get up 2-0.

I didn't give a flip I was crying - I was elated and ecstatic and could NOT believe it!!!  The tourney director tells me, "Hey Melinda your nose is red."  lol.  I told her I didn't care haha!  I didn't care who saw me, I was SO happy!!!

I had no idea where I was on the brackets!

I text my scotch doubles partner and tell him that I was in the finals and I KNOW it was partly because of playing 7 winning matches with him the previous day.

The next day I try not to freak myself out like I normally do.  I wrote before how I went to Texas Roadhouse at 4pm to re-read my notes, my fav sections on Brad's book (Winning Ugly) and had a margarita to calm down a little.

The finals wasn't until 7pm so I had plenty of time to relax, read, and then hit balls.

I go hit balls about 6pm or so and I can already tell that the finals will not be starting on time at 7pm lol.  Both players (who I had already defeated) were playing their little hearts out and it went hill-hill.  Angela Garza had a great tourney getting 3rd and I would be playing Tracie again, this time in the finals and this time on the stream.

I hit some more balls, read over my notes some more, practiced my banks.

Go pee a lot (when I get nervous I go pee a lot), but I never thought ahead.  I tried so hard not to even THINK that I was in the final.  Even tho I was!  I just tried to remain in the present only.

But, Tracie would have to double dip me and I knew I would put up a fight.

We finally start at 8pm on the stream table.

And I did put up a fight.

And I won 4-1 in the first set to win my first ever BCAPL Texas State title!! 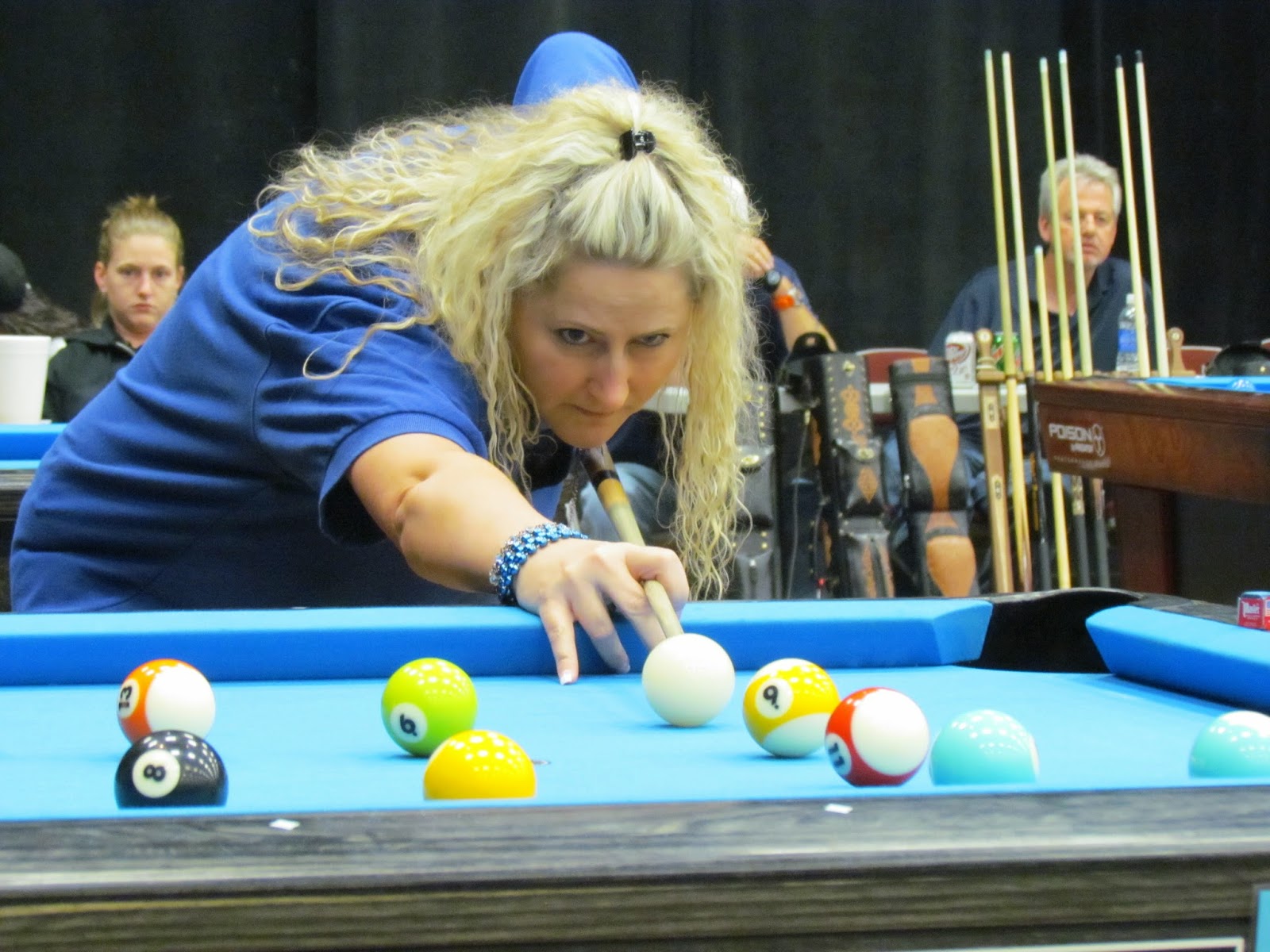 I remained calm.  Cool, collected.  I didn't think ahead.  Even though I could FEEL it inside me I was really going to win this time, I held it together and played POOL.

I didn't jump up and and down like I wanted to after I won, but I was VERY happy inside.  I was proud of Tracie for being in the finals after winning last year - now that's a lot of pressure!

SO many people shook my hand and congratulated me.  Roommie and teammate Janet was there and I told her not to hug me or else I'd cry.  She could only stand it about a minute and ran up to me and of course I cried!  And she whispered in my ear, "Your Mom sees you and is very proud of you."  I was already thinking about her and wanted to dedicate this win to her - my lovely Mom.

I called my boyfriend right away and was sobbing.  He was SO happy for me!  He told me, "I knew you could do it, Babe."  I was on cloud nine even though I could tell it hadn't really hit me.  Even now as I type this 3 weeks later, Wow, I'm really a Texas Champ?  WOW!

I saw Monica and she hugged me SO tightly, "I knew would do it, I knew it.  You were the one to beat!"  She has always been so supportive of me!

Two days later during the team event several people would stop and congratulate me.  One person in particular, Helen Hayes, stopped me and said, "I heard you won.  That is really a great honor and I am really happy for you.  It's a great feat!"  I could tell she was SO genuinely sincere AND that she knew in her heart how important it was.  It meant a lot she shared that with me, as I felt she knew how awesome it really was and how tough it can be to win it.  :)

Also during the team event, people would walk by as we were practicing and say, "Hey Melinda, congratulations" or "Good job, Melinda."  Finally Janet says, "What did you do?"  In this really sarcastic voice lol!!  I cracked up - she was so funny!

She would send me texts while sitting across from me at dinner or lunch and say, "hey guess what? You're a champ!"   It was cool to room with someone who was so happy for me.  :) 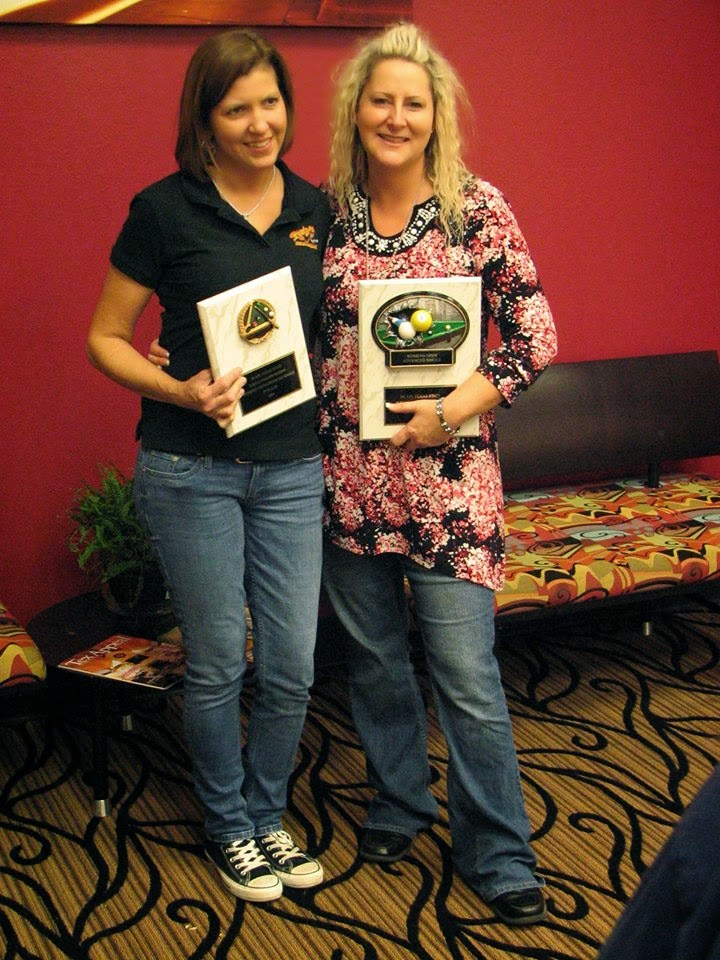 I admit I'm proud of myself.  All these years playing and all these years wanting and yearning to win this VERY tournament, I finally won.

I had SO many experiences in tournaments that led me to this.  If I hadn't of played in all those tourneys, I never would have been able to collect all those experiences together to finally pull this off!  This game is so mental and normally I lose before I ever step in the tourney room because I would think too much bout what I wanted.

But I did so good this year!  No expectation, but still prepared by reading since I wasn't hitting balls.

I don't recommend JUST reading, but if you can't hit balls, you can still help yourself.

I joked with a lot of people I can now retire from pool.

But they would all say, "you'll just have to win nationals in Vegas now."

Uh, I don't think I'm that good, lol.  That isn't even a tourney I have ever fathomed I could possibly win.