That Miss is a Teacher

One of the readers of my blog, that I've mentioned before (Dave), emailed me recently about a situation he had. He wondered what the lesson could be.

What's really cool about my friend is (who lives over 1,000 miles from me in Texas and has been emailing me updates for at least 5 years), he has said my blog posts have helped him with his mental game and his journey in pool. So, anytime he emails me, it brings me joy to hear of his improvements!


"Now if someone told me that the result would have been 11-9 in his favour, I would have thought I played well. He is at the next tier above me, but not impossibly far ahead. But at the end, the result gnawed at me. Certainly not in a poor sportsmanship way. But from my perspective I knew that the 11-9 loss felt different in the way I squandered the opportunity."

He asked me and the readers of my blog, what are his lessons?

This is going to sound really profound from me, LOL just kidding, but there is really a very good point I want to share.

We have all been in those same situations right? dammit LOL.

I believe Dave will learn from this experience a hundred times more than someone that simply played the match with no self-reflection. Not only is Dave self-reflecting, which you all know I've talked about a lot (link here) and am a firm believer it will propel us (another link here), but him writing it down (even just to email me) is going to help him reflect deeper, and help him much further.

What I feel he is going to learn is:

I know it sounds simple and I know there's a lot of emotions, thoughts, feelings that go on when you're competing in a match, but what's interesting to me is he talked about the 10 ball only.  He didn't mention any other miss! So, because that is what is sticking in his mind, that's probably what bothered him during that match, as well.

However, he may not even realize it affected him.  But if at any point he thought further about the miss, or thought about what the score 'should be,' then if affected his game.

You know the scenario!  We are winning and then all the sudden our opponents jump ahead of us, and all we can think about is, "What if I would have made that nine ball....?" (or 10 ball or 8 ball) "I would be up such and such, and I wouldn't be down such and such." It's very tough to not think that way, but it's very important to stay in the moment. The only thing that truly matters is the ball in front of you.

How can you possibly play your best with those distractions in your head?

Here's a link to something that proves that you cannot do more than one thing at once. Even though I claim to be a multitasker and can focus well, in reality it's very difficult to do.

But my long-winded response and my babbling on and on is really to say that his learning experience will sit with him because he's reflecting on it, and because he wrote it down.  He will now try to put more effort into staying in the moment and he will also work on playing his best every single shot, because he saw what that one miss can cost him.

You might think that this is a bad thing that he lost, but in reality (as I've also mentioned before), sometimes a dynamic loss is really the catapult you need in your game.

Posted by Melinda at 7:07 PM No comments: 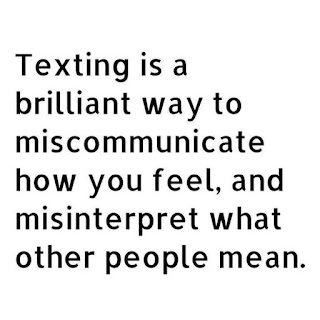 Posted by Melinda at 3:02 PM No comments:

Katniss was sharing something with me the other day... I know, weird right? Just kidding, because as you know she's supposed to be doing that because I'm writing about her pool journey via the Hunger Games series portion of my blog.

What she shared with me was she likes to watch matches of good players when she visits pool rooms. Watching matches is one of the best ways to learn. Seeing the player's decisions, patterns, etc., will substantially improve your knowledge.

However, she made a little side comment and that's what I want to focus on today. She casually mentioned there was a lot of people around her drinking and having fun, and it distracted her. I asked her if she drinks and she said "Sometimes, but usually not at the pool room, I like to stay focused when I'm learning."

I love her thinking!

She is spot on and a lot of people don't realize that when you're working on your game and trying to improve, you really shouldn't drink while you're trying to learn/watch/practice.

I mean, obviously, you can watch matches when you're drinking, and have drinks anytime and anywhere (well, mostly, lol). But what I'm really trying to get across is people shouldn't do it while you're trying to learn. If you are having fun - go for it! Out of the tournament and hanging with friends, do it! But while learning, improving, soaking in matches, drugs or alcohol will impact your state of mind whether you realize it or not, feel it or not, or know it or not. You're not fully absorbing the great shots, completely focusing and paying attention to the great patterns and run outs, or concentrating well on the smart run outs, etc. of the matches you are watching or in practice.

Some people may think this isn't true, however alcohol may make you want to talk to your friends more (which distracts you, right?), it makes you maybe not think as clear (which obviously doesn't help you learn, right?), and if you're sitting there trying to watch shots and matches and run outs to improve your game, you want to do it with a clear, level head with no distractions as much as possible. And drinking alcohol will not put you in a state to help you learn patterns and watch pool.

I feel so strongly about this that about 5 years ago I planned to spar with a friend and give her tips. When I picked her up from her house, she was drinking a beer. I told her I wont go over anything if she's drinking (and this was back when I was still drinking). She looked at me dumbfounded. What? I can't drink a beer? I always drink when I play pool!

Well, not this time if you want tips from me, lol.

If you are watching matches to learn and you are also drinking alcohol (or maybe high on something), I'm here to put a little birdie in your head and suggest it's a disservice to yourself. You should be getting the MOST out of watching matches (or practicing) and drinking/drugs will distract you.

I'm not saying you shouldn't have fun! What I am saying is, there is a time and place for it. While you are learning is NOT the time for that. Do it after :)

So, I applaud Katniss for already following this philosophy. And glad she mentioned it so I could chat about it with you all today. 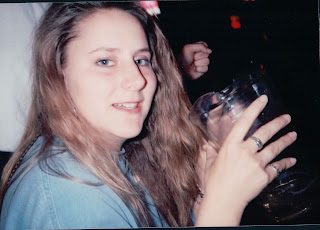 Me, having a little drink in college

Posted by Melinda at 3:26 PM No comments:

I still find it incredibly adorable when my friends get so excited about shots they make at league.... that they send me a text about.  With a diagram! 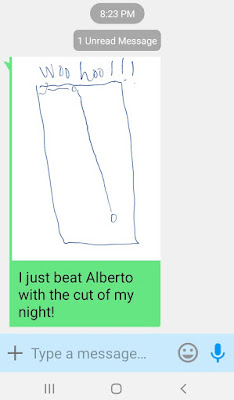