So, Vegas isn't really Vegas unless you run into someone famous. Right? While at the Mosconi Cup, Cristina and I decided one night to venture from the MGM to have dinner at the Bellagio where the World Poker Tour were holding some poker satellite tournaments. Kevin, Wes and Holly joined, also.

As we stood at the Fountain Bar in the Bellagio waiting for our reservation time of 7pm at The Fix, we saw Chris Ferguson aka "Jesus" (if you don't know poker, you don't know who I am talking about) in the satellite room. I tried to take capture a shot of him playing poker, but he was too far away and I didn't want to use my flash and feel like a stalker! Plus, all these guys were playing poker and that would have been rude (lol!). Check out how close, but how far the poker players were: 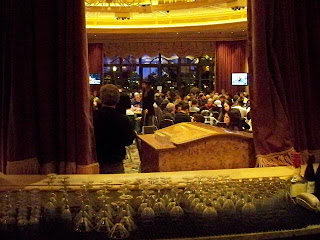 You can't really tell - but Jesus is standing in this photo (he has long hair and is wearing a hat).

As we are drinking our drinks, Wes gets a little excited and points to the poker room saying, "Hey, there's Scotty Nguyen." We peek through the window of the bar and see him seated almost as far as Jesus. Again, if you don't know poker, you don't know who Scotty is, but he is a World Poker Tour Champion and he is know for always saying "yeah baby."

Well, low and behold, Mr. Scotty Nguyen starts to head OUT of the satellite room. I, being the person who I am (not shy at all and will interrupt almost anyone), stopped him as he stepped out of the room and I rambled, "Hey, Scotty! This guy dressed up as you for Halloween" as I pointed toward Wes. Scotty's reply was "yeah baby" (seriously!). I grabbed my camera and asked if I could get a pic of him and Wes and he nodded. 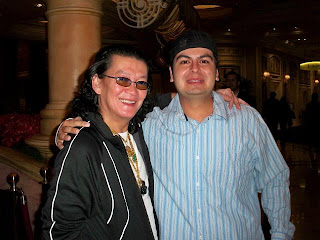 Here is Scotty and Wes 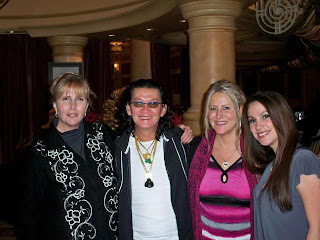 Then Holy, Cristina and I nuzzled in and we got a pic, too!
Scotty was awesome about the photos and said, "yeah baby" a few more times as he walked off into the Bellagio. Wes immediately texted his friends about meeting Scotty and getting a pic with him. Then he pulled up on his phone his Halloween photo as Scotty.

For the rest of the evening I would lean over to Wes and say, "hey, look at this," and show him the photo of him and Scotty! He would have the biggest smile on his face! It was awesome!

Oh yeah, baby - dinner! The Fix was a great steak place - here we all are at dinner: 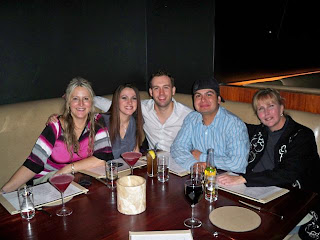 Me, Cristina, Kevin, Wes and Holly
Posted by Melinda at 3:41 PM