Eat Your Heart Out Marop

Justin hilariously wrote about Bill Maropulos (who I call Marop) and his VIP Passes. Well, I had a Matchroom Sport VIP Pass for the Mosconi Cup! Eat your heart out, Marop! 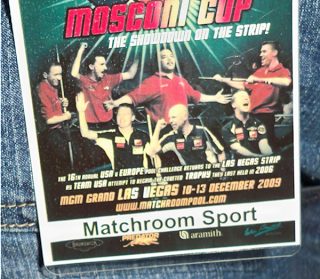 Justin cusses in his blogs, so I snipped out the part just about the VIP Passes for you here from his long blog entry (get ready to laugh!):

Friday finds me back in the bleachers with my main sweating buddy at this event Bill "If you don't play 14.1 you can kiss my a$$" Maropolis. Somehow the topic of total spectator capacity came up and we figured it to be about 1800 give or take. Then Bill went on to compare the events VIP spectator amenities to other events. You see Bill is the Efren Reyes of pool spectating. Its not even close. The rest of the world gets 9-7. Bill has a collection of VIP passes going back to the 70's. He has been to more events than Simonis 860. So he knows what a good VIP seating arrangement is supposed to be like.

He begins to pontificate on the situation: "Well the bleachers are pretty high to start with but the biggest problem is I don't have a table. How can it be VIP without a table? Where am I supposed to eat my chicken strips? Where am I supposed to set my Taco Bell?" all very valid and hilarious points. He then mentions that he feels a little silly for firing $200 at the "PLATINUM VIP SEATING BADGE" when there is often no one even looking at the passes to begin with. I agree with him that this would cause me some annoyance would I too have donked off a similar two bills. I joke that he was probably the only guy who sprung for the entire event PLATINUM VIP SEATING BADGE. I joked that he probably had number 001 on his badge. We laughed and then he said through the chuckles "You know what....when I went to pick up my badge at registration I told them my name and that I was here to pick up my PLATINUM VIP SEATING BADGE and they said "Oh..so you are the one. We have been waiting for you." I literally cried laughing.

So naturally I asked Bill to see this now mythical and certainly one of its kind credential. He pulled it out (I thought heard some faint noise in the background...almost like angels singing) and showed it to me. It was beautiful in all its majesty. Then I noticed something at the bottom. It was a number. That number? 101. I told him that I bet they started the numbers at 100 like checks. Bill agreed. We both cried laughing.

Some pics of Bill and the only known Galveston World Classic PLATINUM VIP SEATING BADGE in the known universe. 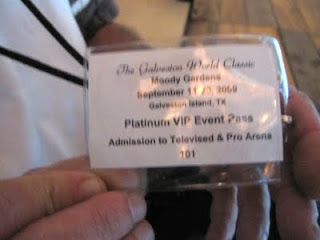 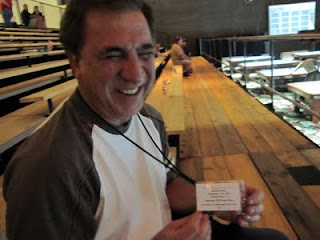