This was the first BCAPL 9-Ball Texas State Championship. It was run by Bad Boy Billiard Productions and played on Diamond 7-foot Smart Tables in Harker Heights, Texas at the beginning of November (2009).
I decided to not play in the scotch doubles event at the last minute because I flew in on the red-eye the morning of that event (Thursday of the tourney) and decided I needed to try and catch up on sleep and also spend time with my Mom. I wasn't sure how I would do in this tournament, I even debated to go at all. But I love these type of tournaments and so I struggled with what I should do. Decisions, decisions....

I had been in Hawaii for work for ten days and so I wanted to spend some time with my Mom when I got back and I was also pretty tired from traveling (I hate stupid, long flights). 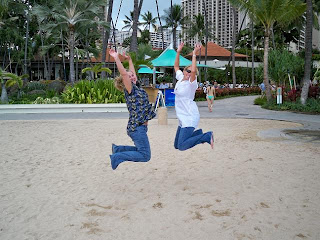 Me and my g/f Allison acting goofy in Hawaii!
While Hawaii may seem like a great place (it is), I was working 12-hour days and did not spend a lot of time sightseeing (except maybe the day the above photo was taken, lmao!).

Knowing I hadn't hit a ball (i.e. practiced) in ten days, I therefore decided to at least prepare some for this tournament in other ways. What a concept! I decided to go into this tournament with a goal (focusing on staying down) and I also decided to watch the player review DVD between Buddy Hall and Grady Matthews. It's my favorite DVD match to watch and I had a lot of time at the airport waiting to fly back to the "mainland." So, I found a little power outlet near a corner (they are actually hard to find in airports) and plopped down to watch the match to get me geared up. Buddy and Grady are excellent commentators and I learn something from that DVD each time I watch it. 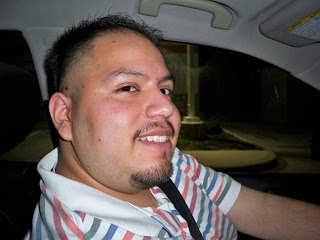 My road partner, Juan.
I got a lucky bye Friday evening and then played Annie Doyle (won 5-1). On Saturday morning I then played Kelly Stanley (won 5-1) and in the afternoon, played Kim Pierce and lost a close one! (lost 4-5). Ouch. I played okay but one costly miss on a 3-ball still remains in my head. :( 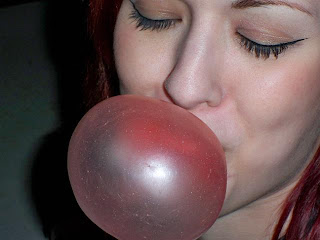 Ashley - trying to prove to us she can put a bubble in a bubble. We waited for a long time and never saw it, though. But, I was camera-ready! lol 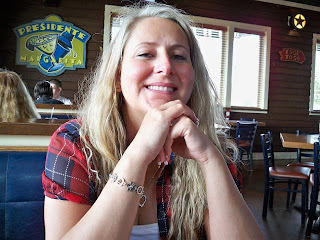 Me, killing time at Chilli's
Then the team event started Saturday evening so the singles matches were put on hold. I was playing for the first time in a team event with my friends Ashley and Connie. This would be a test for us - we will be playing together in Vegas in the BCAPL Championships in May and we wanted to see how our chemistry would be (we have two other team players for Vegas, but this tourney was a 3-person team and they didn't play this weekend). Connie and Ash have played together for years, but I haven't played on a team with them before.

We played well together and I think we were all impressed with each other's play, lol. We got a bye and then won our first match 10-9. Ashley played the best-out-of-three tie breaker and won that match for us 2-1. Whew!

Our next match was uncomfortable for me. We were playing my previous team. :( It was not easy for me and I actually let a lot of things get to me. They played well and won 6-9. They are wonderful women and good friends, so it's always tough to play peeps like that.

We then played our next match on the one-loss side on Sunday morning and we won 9-4. There were only 6 teams, so all of a sudden we are in the finals!

But, before that could happen, they had me play a singles match. I played Nancy French and somehow won 5-3. I do not know how I won, really. Then I was back up again and played Michelle Abernathy. I played good and won 5-0. She got a lot of bad roles. :(

Then I was told it was time to play the women's teams finals, even though I had the finals of the singles event left. But, I didn't mind. Tell me where and when to play. I'm ready!

I wasn't sure how the team finals would go. I think my teammates and I were simply just happy to be in the finals. We played my ex-teammates again. :( But, we played well the first set and won 9-5. We flipped right away and after a bathroom break, we played the second set. then we won that one 9-4. I couldn't believe it! I was SO surprised! I don't think any of us knew what really had just happened - we won the women's team event! We would say later to each other we thought maybe we could win the first set but we won the second set, also. We each played well and we also had fun together. I still am shocked as I type this almost two months later - it seemed to all happen so fast that Sunday afternoon! 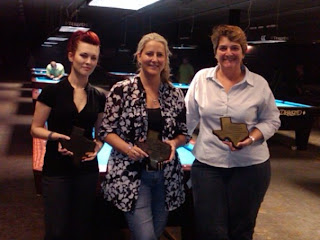 Ashley, Me and Connie - First Place Women's Team!
After the photo-op with the trophies, then it was time for me to play the finals in the singles event. I played Kim Pierce again and we were ready to play!

I played really, really well in the first set and won 5-2! I was pretty excited! I went to the bathroom before the second set started and tried to remain calm.

When the second set came of the finals, I was making mistakes in the beginning. :( I was very aware I was in the finals; I was a little nervous. I get nervous when I play in "title" events; this was no exception. 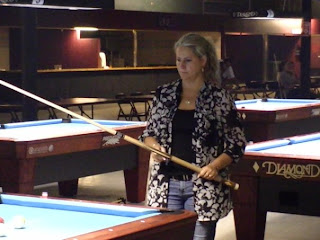 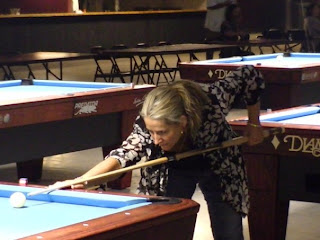 Me, shooting.
As she pulled ahead, I told myself to focus on my game and focus on staying down. It worked again. I came back and tied it hill-hill!

In the last game, a failed safe by me led Kim back to the table but she hooked herself on the 3 and had to kick. I had an out and started my run. I had to stretch on the 5 ball, and instead of getting a bridge, I stretched for the shot, which therefore led to bad shape on the 7 ball. Ugh! I stayed down and focused on the shot though and made the tough 7 ball. WHEW! But..... I almost froze myself on the 8. OMG! I studied it for a long time because the cueball was super close to the 8ball. I figured if I played safe, she would just long rail bank the 8ball and so I went for the shot instead. I thinned it so thinly, that it barely moved (ooops!). The cueball came back down the table and left her a shot. She made it and then the 9ball. UGH!

I got 2nd place, and I felt great, though. I played well! I didn't feel bad at all for some reason. I guess I knew I gave it my all and played my best. :)

Afterwards, Kim told my friend Juan that I outplayed her and deserved the win. That really meant a lot to me. 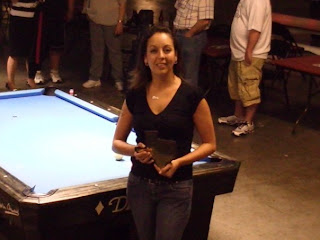 Kim Pierce - First Place!
Here are all the brackets!!

My goal going into this event was to stay down. Follow through and stay down. When I would miss a ball, I would remind myself that is what I wanted to focus on. It was a great goal and it really helped me during this event. I FELT my body playing well, my head staying down, my follow through smooth. I am SO glad I made that little, but very important, goal. I was able to focus on that - which led to playing well (and finishing well).

Did Ashley ever get that bubble in the bubble for you?? When my dentist allowed me to chew gum, I used to be able to do it and drove my kids crazy that I wouldn't teach them how... :) the joys of motherhood!