I talked about that one crazy match during my Reno tournament and also gave a recap of all the fun, but what about the TOURNAMENT you ask? Well, here it goes - a couple of months late (Sorry!).
This was the 2010 Bar Table Championships at the Sands Regency in Reno, Nevada February 22 2010 to February 28 2010. First tourney for the ladies was 9ball, then 8ball. The men had a 10all tourney the first part of the week (next year I hear they will have all 3 events for the ladies, too!)

I thought I would have plenty of time to get to my first match - thinking the matches would start about 2pm instead of 1pm, but I was wrong. I started to get ready about 12:45pm and luckily both Amanda and Tina (my roommates for the trip) let me know as soon as the brackets were up (at about 12:50pm) that I played at 1pm. I literally ran through the casino and then up the stairs to the convention area. Tina then calls to tell me the forfeit time limit is FIVE minutes. Eeeeek! Tina also tells me that any cell phone usage is considered a foul so I turned off my cell phone as I asked her frantically what table I was on. 13, she tells me.

I walk briskly to table 13 and my worst fear came true - I was to play a pro. Ironically, it was the

only pro in the tournament. Lucky me! I got some good advice from my friend Rebecca (winning or losing doesn't define you as a person/player) and also Sylver (take advantage of their mistakes), as I was concerned about my talents against pros. The advice worked, but my body didn't. I honestly admit I was hung over big time! I kept walking over to the water cooler to fill up the little plastic cup to drink more and more water because I was so dehydrated. In addition, my hands were literally shaking a little bit because I was so hung over. Yes, I fully admit I went to Reno mostly to have fun, so I did this to myself, but in hindsight, I'd still have fun and put the tourney second!! I may not do that next year, but this Feb was a continuation of my first-ever Birthday month and I really had a blast continuing the celebration. :)

Melissa Little missed quite a few balls, surprisingly, and I was able to capitalize. I was ahead 3-1 but missed a 6 ball to get shape so was only up 3-2. Then she tied it 3-3. I had a GREAT shot on another 7 ball and got perfect between the 8 and 9 on the other end of the table (woo-hoo! super proud of that shot!), but the cue rolled a half inch too much and I had to play safe and then she got out. She started to play much better - faster and tougher - and she eventually won 7-4. I think of those two missed opportunities to this day - would have put more pressure on her.

I then play at 530pm and that's the match I wrote about earlier. I lost hill hill and didn't even fight or try hard. I was not into the game at all unfortunately. I missed a 9bal hill hill I normally can make. But, I had ball in hand TWO times with 5 and then 4 balls left on the table and didn't get out, so that tells you how much I wasn't into the match.

Two days later, after roomie Amanda Lampert gets 3rd (Yay!!) and roomie Tina Pawloski gets 2nd (Yay!!), the 8-ball tourney starts (Melissa Little would win both events). This time I made sure to attend the player's meeting like I failed to do for the 9ball tourney. I had plenty of sleep and was ready to go! So, of course that meant I would get a bye, lol, and would not play right away. I played at 4pm against the formidable Sara Miller who plays great 8ball. I ended up losing 4-1. I really only had two missed opportunities, and she played really well. 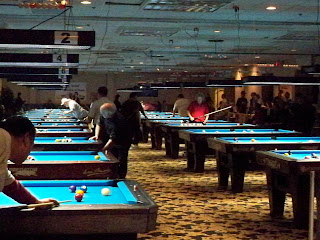 I then played the next day at 10am. I won that match against a girl that told me "I'm here with my boyfriend and I'm only donating." Niiice. I won 4-0. I then played at 230pm. I started off confident and super strong and took a 2-0 lead. Amanda was watching and whispers to me "you got this, you are playing well, I'm gonna go downstairs." She is always so supportive of me! I appreciate her! I continued to played okay, but missed a really crucial, almost straight-in shot. I told Stevie Moore after the match that I was thinking while down on the shot and he replies, "what were you doing that for?" reminding me I should do all my thinking BEFORE I get down on the shot (I really do know that, too!). But I was worried about hitting the 8 ball, so I missed the ball. I had a few more opportunities in the match, but lost 2-4. She ended up outplaying me.
Tourney Description: Dismal
Reno Description: fun fun fun!

Tina ended up placing 2nd in the 8ball event, too!

As a reminder, I did have a blast the whole week in Reno! 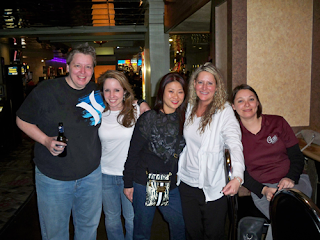 Bonnie, Tina, Sunny, Me and Heather 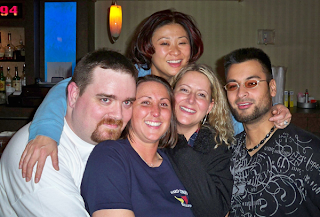 Justin, Amanda, Me, Sunny and Sylver
Best things about the Reno tourney: 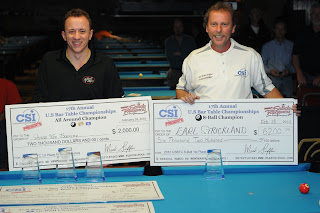