John Makes It Look So Easy

I watched Schmidt's DVD of his 245 Straight Pool run a couple of years back, but that was before I started my straight pool league a year ago, so I didn't really understand his comments too much back then.

Now that I play straight pool more often, I wanted to re-watch his video, which I did on a Wed night last week. Then the next night I watched his 164 run that he commentates WHILE he is shooting.

He makes it look so easy!

I feel like I just pot balls around the table and can't to get too far (my highest run is only 28 - altho I admit I'm pretty proud of it).

I love these two tapes though - his thought process is very helpful! WOW!

I can say that the 164 video is invaluable if you haven't watched it. I don't recall him talking about the last three balls (triangle) so much in the 245 run, and in this video he explains SO much about little important things: getting balls off the rail, getting them off the rail before a second break, hardly moving the cueball, etc. I also noticed he hardly shot any balls up table to the top corner pockets. He didn't say why, but even if a ball could go into the top corner pockets, he still wouldn't shoot them. He always had a plan for them later.

I can't wait to play my next straight pool match after seeing the 164 vid!! 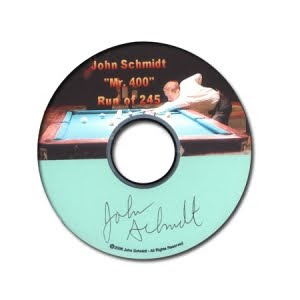 I posted these comments in the 14.1 Section of AZBilliards.com and many people responded, including John. John thanked me for the kind words and then added: "Believe me the game is hard for me too and I still get a kick out of running 100 or more. I'm just like you guys - the game challenges me and is fun."

It's refreshing to hear that from Mr. 400 himself. And, it's very true what he is saying about Straight Pool, isn't it?

I couldn't believe it the the other day when he told me his high run was only 43 for a long time before he broke 100 (112). He tried it again later that week and broke 100 again.

I'll save the rest for the article, but I'm very inspiring....

p.s. I had no idea you had written this when I interviewed him on the 7th. Great minds...