Well, I called John Lewis at ACS and we talked about my recent accomplishments and also my previous stats in National events to see if I could be moved off the ACS Master list (as I discussed with you all back in early March). After 20 minutes or so, but with a little apprehension, he decided I could be moved down.

Woo-Hoo! Therefore, I have decided to go to ACS Nationals! :) 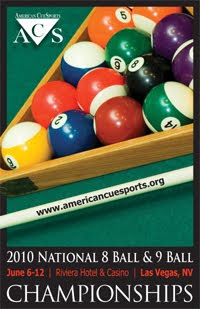 I just put on hold an airline ticket (using my miles) and am ready to send in my entry forms by the late-fee deadline on Monday! I also found a scotch doubles partner - luckily one guy is going to ACS Nationals from my league. I will play in 9ball singles, 8ball singles, and scotch doubles 8ball and then fly back in time to play in the OB Cues Ladies Tour stop in Dallas June 12-13. Therefore, no team event for me, which is okay by me - I'd rather play in the OB Stop. I will miss the Fast Eddie's Tour Stop in Waco (just an hour from me, boo-hiss!) the weekend I'll be in Vegas for ACS (June 5-9), but I really don't want to miss this opportunity!

I am excited to be playing in a completely new tournament for me! I don't think I will know as many people there, but I love the Riv's food (I realize that doesn't sound right, but I really, really do!) and maybe I will get some things done I just know I wont get done while there for BCAPL Nationals. lol.

Email ThisBlogThis!Share to TwitterShare to FacebookShare to Pinterest
Labels: ACS