I don't really know where to begin. I wish I had more time to "talk" to you all more.

I had some really pitiful moments at my last tournament (BCAPL Texas State 8 Ball tourney), some light bulb moments, some pleasant moments, and some really ticked off moments.

Frequent readers will know that I like to delve into the details so it's tough for me not to just say a few things, but hey, let's try it and maybe later I will expound when I can find that all allusive time that I keep looking for.

I wasn't too nervous going into the tournament like I thought I would, but I didn't get a lot of sleep the WHOLE weekend (even though I specifically stated that is necessary for me to do well). I was exhausted all four days. Two days of single events and two days of team events. 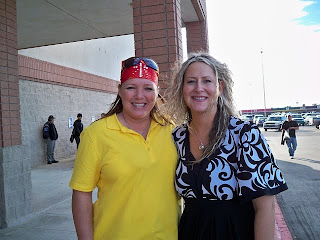 Me and the awesome Stacey!
Singles started Thursday afternoon. I got a bye, then played two close friends back to back who have really improved their games. I won those and then had to play a fierce competitor (in my eyes) next. We played about 9pm and I was tired! My two friends who I had just played watched me and supported me, but I fell apart. I missed late in the rack, missed shots I should have made, etc. I got more and more down on myself, even though I talked to my dear friend Joe Salazar for tips on what to do against a good player while I am exhausted. He basically said desire and heart is what was needed to overcome it (i.e. the yearn to win). So, as I sat there missing more shots, I felt more down about my lack of heart. My opponent had/has a lot of heart.

It took me all night and all morning to get over that match. Friends sent me messages and tried to be there for me, but I was super upset. 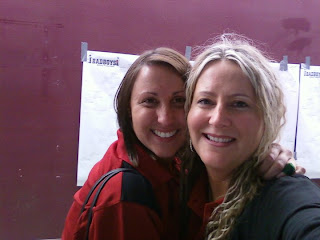 Me and Manders
I then played at 2pm on Friday and I played lights out. I WAS back! I did have some tense moments, but let my play do the talkin'. I noticed I was not tired during my second match at 5pm either and I played really well, then too. I will fully admit (since I am being a lot more honest in this post than usual - not sugar coating my words) that when I was playing my second match of the day, on the front tables, with a lot of people watching, I literally said to myself while feeling comfortable, confident, an knowing I was deep in the tournament: "this is where I am suppose to be." It felt GOOD to be in front of everyone; it felt right.

I then played another fierce competitor with a lot of heart and desire and although I was nervous during the match, I still played decent. The difference in this match was I never got embarrassed like I had the previous night. I felt like that was a HUGE accomplishment! I felt SO good that I didn't let the embarrassment (which is a negative feeling) get in the way of my play. After the match, I almost felt like I had won the tournament - that's how good I felt about not having the "I dogged it" feeling! I did miss some balls and was nervous and prolly gave the match away, but I never felt embarrassed about it for some reason, even with all those people watching. It was a mini breakthrough for me! BTW, Joe was very proud of me. :)

I had a lot of support during the match which was super awesome - a lot of my friends sat behind me or across from the tables and watched me play. Ironically, during one of the breaks, I noticed my opponent crying - I found out she was crying because she didn't have a lot of friends sitting near her. :(

Also, I did try a Crown and Seven during both tough matches (the last one and the one the previous night) - I don't know if it helped or not, though. 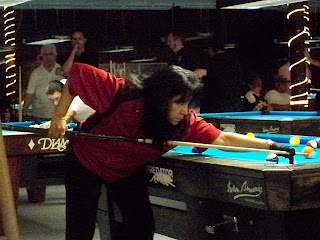 Ms Monica!
Teams started Saturday morning. We mesh really well together and have great chemistry. We lose our first match only hill-hill. I played super sporty, too. :) After 9 games, I had won all three of my games and no one on my team had won one yet. I turned to them and said, "you all know there are 4 players on this team, right?" LMAO! Luckily they are good sports and didn't kill me, lmao! It kinda was a running joke after that and that helped us laugh more throughout the weekend. They then came back after my comment and won about 4 games in a row! Then we tied it and barely lost the tiebreaker - it was a good match! 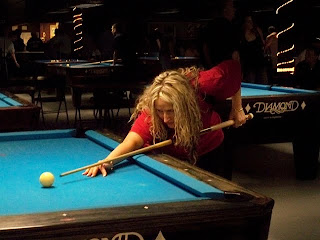 Me :)
We get on the one-loss side and either side is back-to-back play every two hours. So, 10am was a bye then we lost at noon. Played right away at 2pm, 4pm, and 6pm and we all win all of them! We then have to play our 8 pm match but the matches are behind. I kid you not when I tell you our 8pm match was at MIDNIGHT!

During that match, I get upset at one of the other players, but we win and I fall into bed about 2am not really looking forward to our 10am match on Sunday b/c I'm so tired, lol! Sunday comes and I play bad all day. :( Saturday I pulled for the team and got us to Sunday (as Amanda reminded me). Sunday I did not play well, but luckily there are FOUR players on the team! Yay! :) 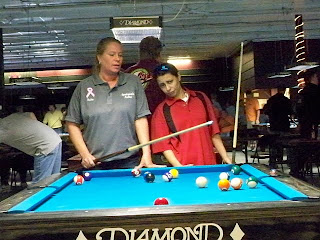 Audra and Nina, discussin' a shot
Our first match on Sunday we are ahead 6-8 in a race to 9. My teammate loses her game on the next table as I realize if I don't win my own game that I am currently playing, we will have to go to a tie breaker. No pressure, really. I mean, only all the players of both teams are watching and all their friends. LMAO. We play a safety game and I know I am the player who will come out ahead due to experience. Well, I get ball in hand and play a few more safes and finally start my run. I stay down well as my adrenaline is pumping, and hit the 7 ball correctly to get shape on the 8ball. I have to cut the 8 in the side and at the last minute, I put spin on the cueball and dog the 8! I jump up and down and say out loud "I was so nervous I spun the ball!" Peeps are laughing at me a little as my opponent makes the last two balls. Ashley (one of my teammates) graciously asks if I want to play the tiebreaker and I'm like, "hell no! I can't play right now, I'm too nervous!" I apologize a lot to my teammates and am super embarrassed. :(

The other team doesn't make a ball on the break on the tie-break game and Ashley runs out! OMG! I was SO happy! Now no one will remember my missed 8 ball AND we get to move on. Yay!! 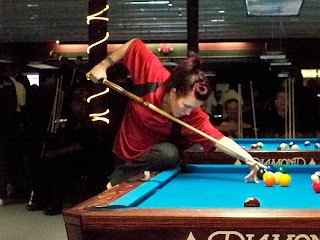 Ashley!!
Of course I reflect on this and realize, wow - she was so calm and cool and not shaking and just ran out! She's like 17 years younger than me and I am still nervous after playing all these years. Wow!

Then we go on to our next match. Tough girls; known for being rude and mean. At some point during the match, I notice people are smoking on the stage of this "nonsmoking" tournament. The stage is only a few tables away from our match and I can smell the smoke and see it rising in the air. I make a few comments about it to my teammates and then finally say "screw this" and walk up there to ask them to please not smoke there. They seemed miffed at me, but put their cigarettes out. I felt bad for saying something but it's suppose to be a nonsmoking event. They normally smoke at the back of the stage, but this was right up front and very obvious to me - a nonsmoker. 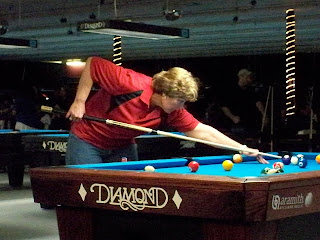 Captain Connie!
Back to pool - we are playing really well and are up 7-3 or so. I ask one of our friends to get me some tacos from Dairy Queen as I know I will need fuel for our next match. I guess that jinxes us - instead of assuming we would win because we were ahead so much, we go hill-hill! Dang it! Ashley again plays the hill-hill match - I'm still playing bad - and there is some drama during the match but she gets a chance at the table after a missed break out by her opponent. Ashley runs out again! Yay! We are all so pumped!

My food gets there and as I open the box two guys walk directly at me and tell me "you can't bring food in here." What? First of all, don't send TWO guys. Second, we tried to explain the snack bar was closed and so everyone else was bringing in food already! They didn't care. One of my friends started snapping back at them but we finally went outside to eat. I was pretty hacked off, though, to be honest. Arguments are so fun, aren't they? It would have been nice if they EXPLAINED why we couldn't eat in there instead of arguing with me and my friends when I am about to play a match. I was HOT!!

We all try to forget all the drama (smoking, drama during the hill-hill game, food rudeness, etc) and move on to our next match against a good team.

So, you can visualize all the emotions from the weekend. I just barely "tapped" on to some of the things I could write about in detail. I could write 4 to 6 blog entries about this one weekend!

My Tournament Description: Rollercoaster
Posted by Melinda at 4:10 PM

Wow, what an emotional roller coaster of a tournament!

I was actually watching some of the obcues videos this week. Sorry about the match with Courtney. :/

Sorta unrelated question: Does Ashley have a blog too? She's always mentioned in your posts and I saw one of her matches today (vs Kyu) and plays really well. She seems like a great person who would do well with a blog. I can always use more things to read online so I thought I'd ask.

As a matter of fact, am I blind or do you not have a blogroll on your page? Who else do you read?