In Scotch doubles, my partner and I (Tony Ewart) placed 7th out of about 385 players! We played really well together!

We didn't practice (as you know from last year I don't practice scotch doubles anyway), but he and I both know the game so well, and we play alike, so us playing together worked out really well. I asked him a few times during the tourney if the shot I shot was right, but he usually replied with "it worked out" or "I thought it was fine." Only time did he offer advice for maybe an alternative selection - and that was on the final day. We lost our final match hill-hill (2-3), and I know we could have gone farther! His wife was super supportive and was our personal cheerleader, which was comforting and helpful. We were only down in one match - the first one, 1-3 - and came back to win 4-3!   The guy of the other team was so upset, he wouldn't shake our hands.  Eeek.  It was a scary start, but we played much better after that and missed much less than that first match.

My partner and his wife had to catch a 6am flight THAT morning and landed with less than an hour and a half before our first match because of cancelled flights. It started out a rough trip for them. Luckily the lack of sleep and distractions of the tough travel didn't affect his awesome play.

Women's Open Team Event:
For the team event, my team No Holes Barred, was an excellent team! We have chemistry, play well together, we each play well individually, AND we have fun! We placed 7th and had many hill hill, awesome matches, including the last one. I had a great, great time! 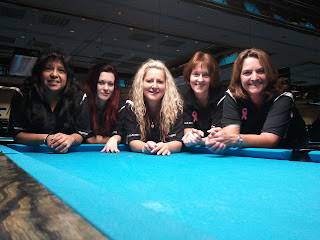 Monica, Ashley, Me, Jennifer and Connie
Here's a vid of the shirts that are embroidered with ribbons that meant lot to us.