I am slacking on my straight pool league matches this season, so I decided to finally set up a match for Friday night (Jan 29). I am going to be out of town a lot in February (Tulsa, Vegas, Houston, Reno) so I needed to get a match in. I have another one planned for Monday night, also.
I met my opponent, John, at 630pm after work at the pool room and felt pretty good even though I went to bed late the previous night and also worked all day. I didn't know how I would do, because although I did okay in the OB Cues Ladies Tour stop last weekend (which I hope to write up sometime soon), I hadn't had a chance to practice during the week and so I didn't know exactly how I would fair.
However, after a few innings, I found myself up 30-6. I was feeling pretty good about my play and realized why I was prolly playing well. On Thursday night (the night I stayed up to late, lol), I watched the semi-final and finals of the Derby City One Pocket tourney. Sylver Ochoa played Bustamante in the semi-final and then he played Scott Frost in the finals. I watched it live via the Internet via Accu-Stats. I watched 5 hours of one pocket, each set went hill hill! Although Scott Frost ended up winning the tournament, almost everyone agrees Sylver out played him and out maneuvered him in the finals. 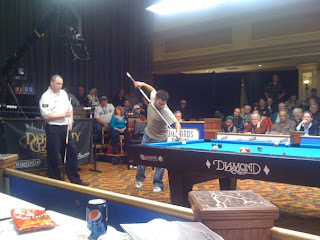 Photo Courtesy of CSI Sports.
Sylver plays very deliberate and takes his time. I am trying to take my time when I shoot, so it's really helpful for me to watch him play (same for when I watch Allison Fisher or Karen Corr). Sylver is also the one who stresses that a smooth stroke is key to pocketing balls.
So, I had the 'deliberate play' I guess in the back of my mind when I played my Straight Pool match and it really helped. I felt confident!
Of course, as this point in the match (being up), I start to think about that - that I am playing well and why. I get a few chances and miss some balls and next thing you know, John has a few good runs and ties it up 33-33! After such a good start I had, too. :(
I heard him tell a mutual friend he was 'back in the match' because I made mistakes and "let him back in." I knew this could easily affect me to the point it would hurt my play. While I am thinking this, a couple of guys come in and sit next to our table and watch us as they order some grub. They arrived for the Friday night tourney. John happened to pick the table that is right in front of that Friday night tourney so many people would come in during our race to 100 (and the tourney even started while we were still playing).
Okay, back to 33-33.... at this point, I hear his comments, then see the two guys sitting there watching. I literally say to myself, "this isn't going to be good." I knew the comments could get to me (it can be a sharking move) and I knew the guys watching could get to me (they know straight pool well and I could easily wonder what they were thinking, lol).
But for some reason, (I am guessing the reason here....) that instead of "feeling" emotions, I accepted John's comments and accepted that the other guys were sitting there. I started a little run and kept running. I then realized without looking at the score that I had beat my previous high run of 19. I didn't know what I was on, but I knew I was over 19. My friend Viet My stopped by the table to say hi and I hugged him while I debated my choices and whispered in his ear, "I am on my new high run right now."
I ran that rack and was on my third break shot. I left an okay shot, took my time, and focused on making it. I made the cut and broke some balls out, but wasn't left with a shot. I tried to slow roll the 5ball past the 10ball down the corner and cheat the pocket, but I knew the 10 was in the way, but it was my only chance at a shot. I missed it but was anxious what the new high run was - it was 28! I know that sounds so low, but it's higher than 19! LOL.
I could NOT believe it! My buddy Robert Cleland came in to play in the tourney and I was so excited to tell him I beat my new high run! He is the one who convinced me to play in the straight pool league so it was bitter sweet he was there.
Although I could have played better after the new high run to win sooner, I admit I missed some balls - I finally won later rather than sooner with a score of 80-100. When I was ahead by 30 (score about 35-66), John wasn't playing as well and didn't seem to really focus. I know you feel like it's tough to overcome such a deficit, but he didn't seem like he was trying anymore. But, I also didn't capitalize enough and it dragged out.
I recognize that in the middle and toward of the race to 100, I lose focus; I need to work on that.
Robert bought me a Smirnoff Ice in celebration for my new high run and I sat there and watched the tourney while I caught up with my friends Julie and Ashley.
Did I mention I go a new high run? :)
Posted by Melinda at 7:53 PM

Email ThisBlogThis!Share to TwitterShare to FacebookShare to Pinterest
Labels: One Pocket, Straight Pool

OMG!!! Why didn't you tell me lady! Grats, that's awesome....although you're nipping at my heels, I have to start practicing!

Congratulations Melinda! You're going to hit that 30 very soon, I know it!