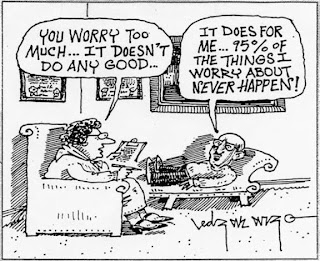 What, me worry? Yes, me worry. I'm a chick, I worry sometimes.

I heard the other day a friend may come watch a tournament I am playing in this weekend. It will be the first tournament of the year for the OB Cues Ladies Tour (already?! YES, already!). :)

Knowing this certain person may attend is, I admit, a little bothersome. It's not because I cannot play in front of them - I can. The problem is, he is a distraction. I wouldn't even give it a second thought if it was his first time at an event I was playing in. Instead, though, I have experienced how he acts at tournaments.

At the first event I met him at, I was playing in a match for 5th place and he sat right behind my opponent and I and proceeded to talk to both of us during the entire match. He made comments about my opponents' shots and I could also hear him talk to her about mine.

Away from that match, I noticed he also plays favorites at times. While everyone has favorites, they just usually don't make it so obvious or state it out loud, lol. He just doesn't know that his comments may be bothersome to some people.

If he knew he bothered my friend and I with his comments (btw, my friend was my opponent in that match), I doubt he would continue to do it. We could say something to him about talking during a match, but the other things are what I will call 'personality differences,' and not something you should ask someone to stop doing.

Spectators are not allowed to talk to the players at this tournament this weekend. That will help my friend and I out. :)

I know what you are thinking - I have enough years under my belt to know (1) I shouldn't let things bother me that haven't even happened yet (lol) and (2) when I play I should focus on pool, not people around me. I am being more open and honest this year in my blogs. You will find out at times I am super confident and other times I am really not (oh, hey, I'm human, too!).

Well, this will be a good tester this weekend for me! I'm going to try and not let it bother me; instead, use it as a situation I can test my mental toughness on. If I look at this as the Glass is Half Full, then, hey, I am lucky I know ahead of time he might be there! I can prepare for it and use it as a good test. :)
Posted by Melinda at 4:03 PM

if ur friend doesn't know then u should tell ur friend that the comments bug. a quick lesson on etiquette shouldn't hurt.