My teammate (I'll call him Cap) was shooting against Oscar Mayer (no, that's not his real name, either).  It was a pretty contentious game, as we HAD been up 8-3 in a race to 13 in the second set of the finals of our league playoffs, but we found ourselves down 10-12!

So, the next 3 games were MORE than crucial - we now needed ALL 3 games to win the playoffs.

So, Cap and Oscar Mayer are in a safety game.  Oscar Mayer is not the type of player to take risks when the pressure is on and he was playing safe after safe.

It was a good ploy at the time because Cap had two balls that were next to each other, but it was not a perfectly lined-up combo: 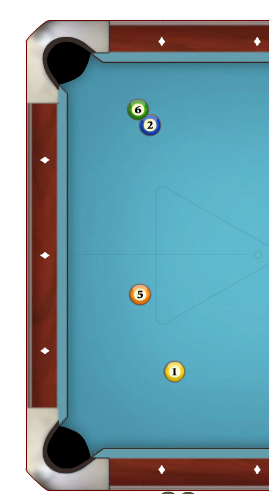 If you don't know this shot, it's actually very confusing imo, lol.  I learned how to make these 'off' combos from Phil Capelle and made a video dedicated to the combo:  http://www.youtube.com/watch?v=-YdszWlxrH0

Cap was solids and had that weird combo.

Oscar Mayer kept playing safe, but Cap would play safe back.  Cap did not want to take any risks, either.

At one point, Oscar Mayer played another safe but he MOVED Cap's 2ball.  All of a sudden, the balls were WORSE!  Now, the 6ball couldn't even be combo'd in: 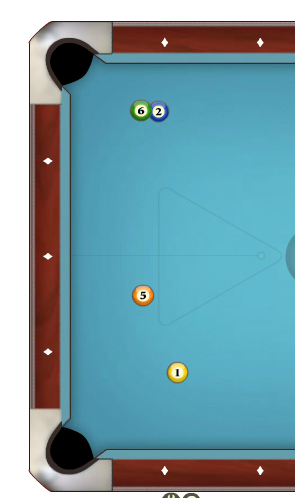 At this point, my whole team is talking about the situation, while watching what Cap and Oscar Mayer decide to do.

I figure that Cap should move the 2ball back to where it was.

Another teammate said he would move the 2ball but LINE up the combo dead.

What do you mean you would line up the shot?

After some time, Cap moves the 2ball, back where it was.  Almost exactly.

I'm thinking, "that's what you are suppose to do - move it back, not leave it where it had accidentally been moved by Oscar Mayer."

But then I was curious, did my teammate really suggest he would move the 2ball into a better position next to the 6?

I turned to him and asked him pointedly that question.  He replied, "Yes.  Oscar Mayer should never have moved that ball, and you are suppose to put it back "in the vicinity" of where it was."

I agreed, as I have had someone do that to me before (that was quite horrific), but I didn't think it was right. Plus, if Cap had placed the 2ball where the combo now lined up, I think all the railbirds and the other team would think that was unsportsmanlike.

Instead, though, Cap moved it where it had been, and the game continued.  While Oscar Mayer have had the advantage, he played a bad safe that led to Cap playing a GREAT safe and was able to get out next inning with ball-in-and and put us closer to the win.

After he won, one of my OTHER teammates told him, "You won that game because you are too honest."

I was thinking, am I one of the few who thinks that was the RIGHT thing to do?  To put it back where is was?

I looked up the BCAPL rules right away on Monday and read no wording that you put the ball back in the "vicinity."  So, maybe that was a rule in the past?  I dunno. Not my cup of tea.  I think it's dirty pool.  If it's in the rules, someone share with us.  But I couldn't find it.

You are right -- put it back "where it was." Anything less is cheating. But, it's always open to question after the ball has been mistakenly moved. You are NOT to IMPROVE your position by locating the ball to a spot that helps you. If you're honest, you either move the ball BACK, or let it lie. I saw someone do this to a "top" shooter one night and there were almost fisticuffs. In the end, you have to live with yourself. And if you know you've cheated, it's just bad karma.