I ventured to the ACS Nationals tourney again this year in Vegas.  I wouldn't know how I would fair, as I was now considered as 8-ball "Advanced" Player because I placed 3rd in the Open 8ball division last year. So this year I would be playing with the big girls in the 8ball division, and ranked higher in the 9ball division.  But, this year I was going to be able to play in the team events!  My first time at ACS Nationals. :)

For some reason I was rated a Master player in the singles 9ball division.  It made no sense to me.  I raced to 7 in the all-combined 9-ball division, and Open players raced to 5, Advanced to 6
and Standard players to 4.

I wasn't happy I had to race to 9, when all the ACS literature clearly states I was an advanced player.

As I readied myself for my defense the first morning, already people were in line to complain to the head guy and I already knew my plight would be for nothing.  I simply listened and knew I wouldn't be moved down in the next 20 minutes before my first 9am 9-ball match.  We asked to just clearly state the 9-ball rankings in the guidelines, as all walked away miffed.

I was bummed, but sometimes games go like that.

I was told later she said I gave her the match and she was correct - I did.  I got too confident and lazy and missed when I shouldn't have.

I then had to play another 5 on the one-loss side.  She told me she was super hung over and may have to run to the bathroom.  What?  It's 3 in the afternoon, you lasted this long in the tourney?

I missed a few key shots but so did she.  I made some stupid mistakes but then started to shoot more decent to get with her on the hill, when I freaking hooked myself on the 8 ball!  With only the 9ball left.  OMG....

I knew if I missed this, she would have ball in hand with two balls and it would be over with.  My tourney life was dependent on my kick.  I got down and then got back up and reconsidered my shot:  "Maybe I should kick the other way?"

I kicked the other way, and hit the 8ball.  Whew!  And then I noticed the 9ball slowly rolled toward a pocket and fell in.  Oops.  OMG, really?  I heard my friend say,  "Johny Archer says when you make the right choices things work out."

I then broke, and even though it seemed to take forever, I ran out!  I took my time; probably too much time, but actually broke and ran!  To think I almost lost the match a game earlier because I hooked myself was unreal.

I then played a rated 7 player and was ON FIRE.  I won 7-1.  I was playing so good, I had wished I was still playing more matches that day!  But, my next match would be at 9am the next day.

I get to the pool room early the next morning and my "4" player is warming up.  If she's lasted this long, she must be over rated I tell myself, lol.  We start about 840am, and she's making several balls the first game.  I was like, "yep."  But then she whacked at the 9ball.  Oh, I see.

She would whack at the tough shots, but otherwise shot well.  If she would shoot all her shots smooth like she did for most of her balls, she would have had me.  But whacking at balls on a bar tables especially isn't good for yourself and I won 7-2.

As I'm playing in my match, I notice the match next to me.  I wonder, "Do I play the winner?"

I check the score-sheet and sure enough I do.  This blond girl playing is playing GREAT.  She didn't miss but one ball for the 3 games that I saw.  I was like, Wow.  That has to be a 7.

Sure enough, that would be my opponent.  I would tell her after our match how much I enjoyed watching her play.  She was the epitome of 3ball shape and barely missed.  I was very impressed.  Turns out she won the Advanced 8ball Division last year and always does well in these tourneys.

Before we started, she seemed happy to be playing a 7.  I guess playing the 4s and 5s were stressful for her, too.

I lost 2-7 but could have made it closer.  But, I made some bad choices and scratched twice.  I didn't really show up.  Out of about 45 players I placed 7th and felt pretty good though!  Last year I won one whole match in the 9ball division.  I was already doing better! 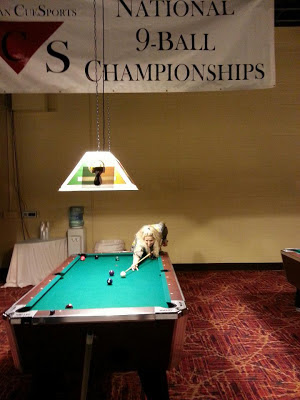 Me, in the 9-ball division

The Advanced 8Ball Women's division had 14 whole ladies in it.  Wow.  I was bummed.  Then it got worse when after my bye (at least I go a bye, lol) when I see I have to play the same tough opponent
who put me out of the 9ball division and won the Advanced last year.  Yikes.

But, I wanted to play my game and prove I really CAN play, as was NOT indicative the previous day.

My match with her was at 5pm.  I had all day luckily to regroup from my hangover (I was in Vegas after all, lol).

The Advanced division was a race to 7.  In 8ball, that's a very long race, no matter who you are.

She wins the first game after not getting out, but I don't get out either not being able to make my 8 into any pocket (I got bad shape).  I was hoping that wouldn't be t the formula for the rest of the match.

A friend comes and sits right between my opponent and I and feel bad, as I don't want it to bother my opponent.  But, I try not to be distracted by that and proceed to run out from her miss!  I then break and run!  Holy cow, I'm up 2-1!

Yes, I know it's early, lol, but I was up against the favorite!

It goes 2-2, 3-3 and then we both start missing.  I got frustrated but tried to figure out what was going on to get back in the match and NOT think of what the score SHOULD be b/c I missed some key shots earlier.

She is running out well and I see my fight is about to end, but SO excited that I played well against her!

I get the cueball and study the layout.  Stripes are better,  I see my plan and start to execute it.  I am about to win.  I already know I am going to run out.

I shoot the first ball and she comes right up to me and says, "You are suppose to shoot from the kitchen."

ACS rules are you have to shoot from behind the line if you scratch on the break.  I was so accustomed to BCAPL rules, it hadn't even dawned on me.

I played the best match and I lost on a rule!

But, I really wasn't all that upset.  I was SO dang excited I played well, I was fine with the loss.  I was simply relieved I play so well against her this time. :)

It was really nice to get a compliment from someone who played really smart and well.  I felt SO good about my game after her compliments and was no longer worried I was in the Advanced division.

I played really well in 7pm match and was really coming with shots, but also missed a few shots that I shot too softly.  I lost 5-7 and was definitely overly confident and underestimated my opponent.  I placed 9th.  Ouch.

After the match, a couple people said I played really well.  I was like, well, I didn't win and didn't play all that good.  But then realized their compliment and sincerely thanked them.  I was just upset.  I had the match and lost focus (because of the long race, too?) so I wasn't happy I lost from thinking too much (i.e. the mental game).

The solo walk from the Tropicana to Planet Hollywood was soothing, but long. Recapping my play of the last day matches, knowing I'm out already.  :(

When I got to my room, I realize just how utterly exhausted I was from the long hours from the last 3 days of play and was thankful for my bed and for a day off the next day.

7th and 9th doesn't sound too bad I suppose.  But, I did play good most of the time and enjoyed the tourneys.  I just need to focus more.  I love experiences!