I played for the first time in the team event at ACS Nationals.  Both the 9ball and 8ball divisions.

My teammates, Courtney, Angel, and Janet are good friends of mine.  We have played league together but not at state or nationals before.  We would end up winning all all 9ball matches on Thursday and find ourselves playing for the freaking hot-seat on Thursday morning!! 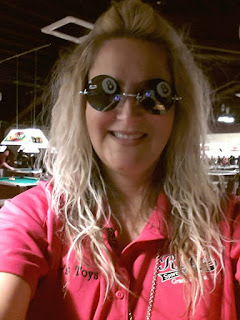 The 9ball team event had a funny scoring system.  It's a 3-person roster and you play your opponent twice before going to the next person.  It's a race to 10.  So, IF we happen to sweep the first round, we would be up 6-0.

I know, it's confusing.

In one match, it went hill-hill and I was the hill-hill person and won.  :)  I admit it felt freaking fantastic!  I was playing really, really well and it felt great to be there for my teammates.

Then our last match, we needed 4 wins to win.  Yikes!  6-8 them.  Teammate Janet was playing next to me and lost her first game, but then won her second game.  7-8.

I'm up and I need to win BOTH my games AND then it goes to the tie breaker match (me).

I make the 9ball on the break, then in the next game I hook myself on the 7 ball!  But, luckily I kick it in and win that game with super tough shots on the 8 and 9 (my heart is beating out of my chest).

THEN I win the freaking hill-hill game by running out 4 balls to a tricky 9ball combo!  OMG!  We are not going to be playing for the hot-seat the following day!  The whole team is SO excited!! 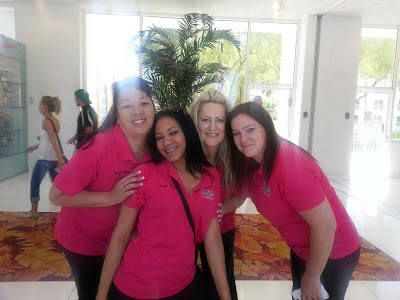 
A few hours later (the same day), we play our first 8ball match, race to 9.  We hang in SO well and [;ay good!  The match ends up going hill-hill and I see the run but I accidentally hook myself before the 8ball.  I couldn't believe it!  I saw the out so well and was so disappointed for that mistake I never saw coming, esp after the girl ran out and we lost hill-hill :(

We then play at 7pm and we lost 5-9.  This team was the rudest team I have ever come across and the whole "debacle" will be dedicated to an entire future separate blog article. 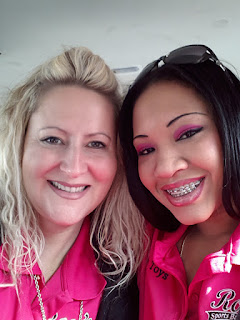 Roomie and Teammate and I, Courtney, on our way to the first match.

My teammates were awesome.  They were all so happy to be there, played their little hearts out, and really enjoyed the experience.  It will prove to be a HUGE learning experience for them!  I am very excited for them  :)  They all stepped up, showed heart, and even some nerves.  It was cute and wonderful.

At one point, I told myself I would be so honored to help them win a National Title and to be a part of that with them.  But, I knew not to think ahead.

Turns out, my teammates were already thinking that way.  Two of them texted me about being national champions.  I had a little pep talk with them before we played in next match and expressed we need to remain in the present, not think ahead, and not worry about misses.  Just HAVE FUN. I knew from experience that yearning for a title cane get in the way of playing well.

We were all very bummed.  Esp since our opponents didn't run us over at all; we had several chances in all the games, we just didn't play well.  I think if we had played this match the previous day when we were on our winning streak, we might have faired better. This 9am match would be our ONLY match of the day, too.  WOW.

Our third place match would be at 9am on Friday morning.

We had all day to kill.  And then wake up bright and early again.  All I day I kept saying, "You couldn't win 4 games, Melinda?  Really?"  I felt bad for my team I didn't deliver in that match.

We end up having to play the team that we won hill-hill against when I had to win 3 games in a row to win.  At 9am.  On a Friday morning in Vegas, lol.  But, this was to see who would get to play in the finals!

The match started out very scary!

So, all I have to do is win three games in a row again.  I can feel the pressure like never before.  My heart is beating out off my chest and I only tell myself to STAY down on all my shots, after we have an epic safety battle.

I won my first, then somehow win the 2nd.  I feel so much pressure (not nerves) but I'm staying down well and feel good.  Since I have had experience in this position in the past year, I'm comfortable in this spot with staying down and stroking more when the pressure is on.

We flip for the final game and I don't win the flip!!!

I just pray she doesn't break and run like I did before on her.

I see a run, but it's extremely tricky to get to the 4 ball or else I have a 4-ball combo.  I see how I'm going to get to it, but go a little to far.  After studying it for some time, I decide to try and bank the ball hoping to get safe if I miss, but also hoping I leave a shot on the 5 if I happen to bank it it.  I don't make the bank and also don't hook her.  :(

To be so close for my teammates hurts my heart, but I know they know I tried my little heart out for them.  But, we finished Third Place in a National Tournament!  And we got plaques!  (girls love plaques)

I keep thinking about how close we got to being IN the finals.  If some of those first 4 combos hadn't of gone, we would be IN the finals.

They keep thanking me for allowing them on my team, which sounds funny to me, lol. Like I said, they played their little hearts out, had fun, learned a lot, and played good.  I'm super happy for them and super proud of them! 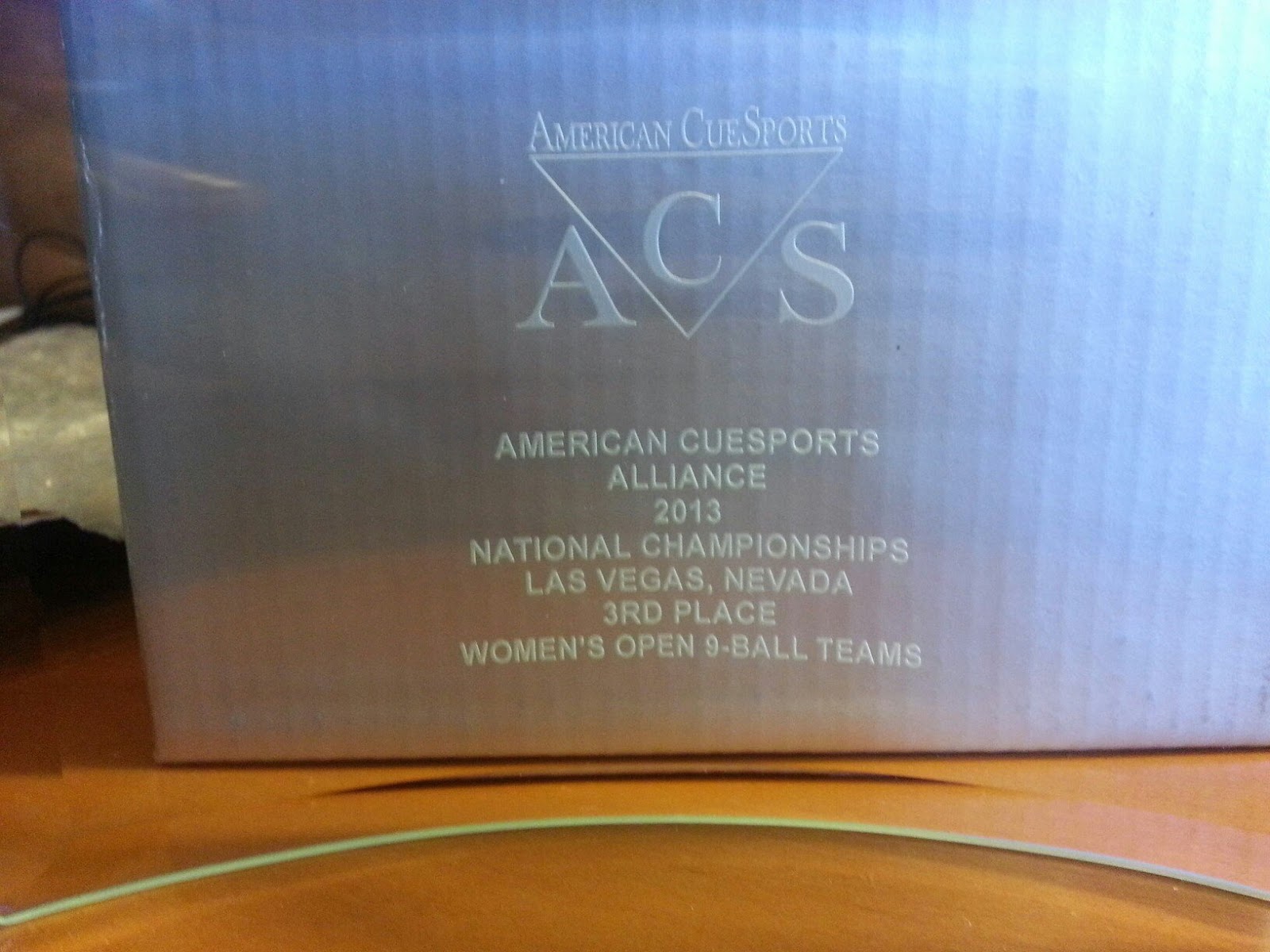 We would like to thank Roy's Sports Bar and Grill for buying our shirts!  They were awesome!  Thank you, Roy!  And to a little awesome friend who helped us with the team entry! 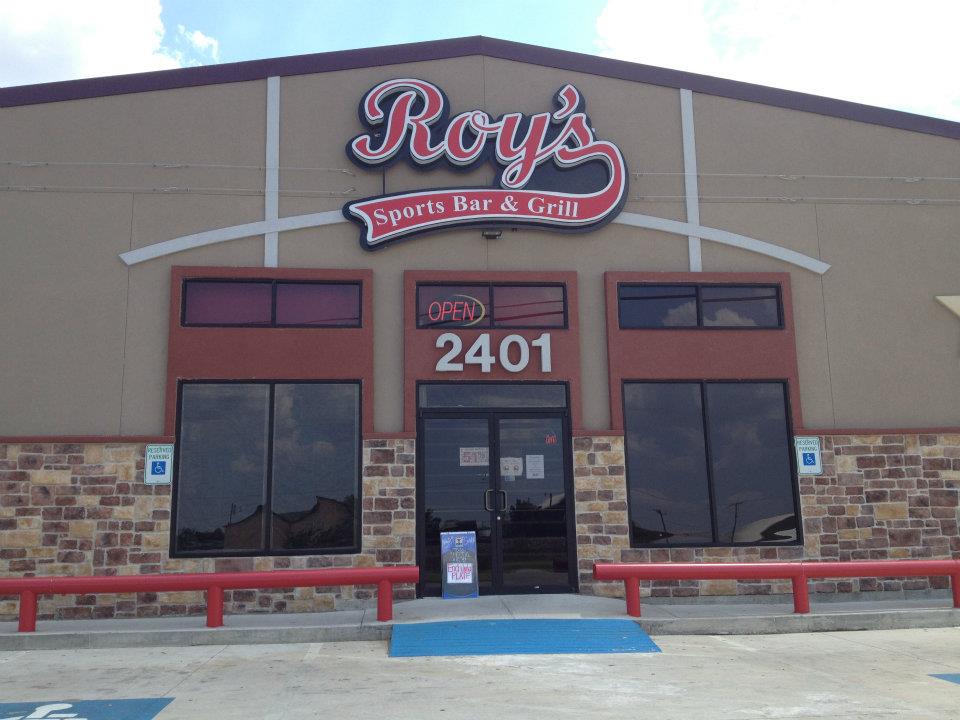 Email ThisBlogThis!Share to TwitterShare to FacebookShare to Pinterest
Labels: ACS

I think that was an awesome blog and I am very happy I am part of it and that we had such a great captain!!!!!