I recently came across two instances of slow play.  Check these out:

I was up against a new guy, so I had no idea how we would do sparring against each other. With my season starting off with a loss, I yearned for a win, I admit.

He told me right away he used to play straight pool about 15 yeas ago, so he knew the game at least.  When he practiced and hit a few balls with his black-wearing glove, he missed by almost a full diamond.  I was like, "hmmm...."

[I will at this point start to call him Turtle #2].

When we started the match, he wasn't missing like he did when he warmed up.  But I got side tracked.  Not by the glove, not by hist shots, not by distractions, but how long he took to hit each ball.  I was down -2 to 17 right off the bat, which didn't help, but he took so many strokes EACH ball, I seriously wondered how I would manage the race to 100!

Then I saw him do what I normally do - he fell apart.  The pressure of me tying the game got to him (I'm guessing).  I even called two fouls on myself (touched a ball he didn't see and double kissed a ball only the shooter can feel) and was still ahead all of a sudden.  [this is an all-foul league]

I admit I talked more from the drinks, went to pee more than normal (I hadn't had dinner yet) and so going on almost 3 1/2 hours I was probably annoying him and THEN I passed him up.  All pure speculation on my part.  But I end up winning 100-86 somehow!  (almost exactly 4 hours later)

Everyone in the pool room noticed how slow he played.  I was surprised how many noticed, so I guess it was obvious to them, too. I kinda feel sorry for (1) him - because people were kinda making fun of him from afar, and (2) his opponents - because they wont be happy how long the race to 100 will take if he gets to the table a lot (I know it annoyed me and I had to really try hard not to let it bother me). 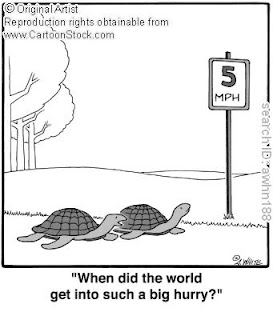 SLOW PLAY TWO:
Two days later one of my straight pool league mates (The Talker) tells me he already played the "recognized" slow player in our league (Turtle #1) about a week ago.  This slow guy is not the same as the guy I mention above.  One has been on the season for while, and the one above is new to the league.

Turtle #1 has been known to annoy his opponents because he takes a while to make his decisions and shoots a little slow (not 15 strokes, just kinda slow).  Plus, he plays a lot of safes.  While the match may go slow, I don't mind because it's part of the game to play defensively.  And, that's just the way he plays.

However, I was stunned what The Talker told me!  He told me he told Turtle #1 he wasn't going to put up with him playing slow and playing a lot of safes.  He actually TOLD the guy to go for shots instead of playing safe (like break out shots he thinks he might miss and leave a wide open table).

The Talker told me he already told the League Director he would forfeit if he played slow and didn't take chances.  He said, "our matches shouldn't take 3-4 hours."

I was stunned.  Really??  You're gonna make the guy get out of his element?  Shoot more aggressive so YOU don't have a long match?  What I see is The Turtle wants to win and he's giving himself the best chance by playing defensively (he had a great season last Spring, too).

I am still shocked as I type this.

I personally think the guy was out of line telling him to change his game and almost implying the league isn't important (imo) b/c he should go for shots and take risks.  Huh?  If you don't feel comfy, play safe.  Lock them up.  That wins games!

Ironically, The Turtle beat The Talker anyway.
Posted by Melinda at 12:21 PM

The question to consider is at what point are you taking someone out of their game? In the case of the Talker/Turtle #1, it's obvious. The Talker is demanding the guy change his entire approach/strategy just to suit himself. With Turtle #2, 15 strokes is definitely excessive but that seems to be his game so can you legitimately ask him to speed up?

In the best case, you can pull Turtle #2 aside and polity point out that his slow play is getting impolite attention and he should try to speed up both for himself and the other players.

I agree, Matthew. Completely. The Talker is being selfish. If I see Turtle #2 again, maybe I will say that to him. Good advice.

Thank you for the comments!