On Friday Feb 11th, at the last minute on that evening, I heard there was a special Scotch Doubles tourney being held (probably out of respect for Valentine's Day).  My Scotch partner, Brian, said he would play and we raced quickly to Good Times in Arlington, Texas because sign ups were at 730pm and we were running late.

It was such a last minute decision, I didn't even have time to go home and get my cues first!

We show up and there aren't many teams there.  I can tell Brian is nervous about wasting his time at this little tourney with no players, when instead he could be playing at his normal Friday night tourney that he likes so much.  But this scotch doubles tourney had a calcutta and we were one of the favorite pairings in the room, so I hoped his apprehensiveness would change soon.

By 8pm, Brian was convinced we should stay - he could tell how excited I was to be playing in a tourney with trophies, but more so because more teams showed up.  More teams means more money!  Once he made his mind up to stay, he was ready to play and win!

We didn't go highest in the calcutta, but we still were one of the top picks, and that was a great confidence booster for me.  I didn't know all of the players there - being one of the best female players in the area, if I don't know a lot of the other players it normally means they don't play that good.  It might sound conceited, but the fact is I play in so many tourneys with well-known, good players that we all know each other.  And because pool is dominated by men, everyone knows all the female players because there aren't many of us.

We play our first match (8ball, race to 3) and we win pretty easily 3-0.  We have to share his cue, but because it's a Jacoby and I own two myself, I get acclimated to it on the first shot.  :)  During the first match, I shoot one shot pretty sporty and I tell Brian afterwards, "I shot it that way because I have been watching you gamble so much lately and my confidence with those shots have increased."  I was all proud of myself for how well I executed it because I normally don't shoot those type of draw shots.

The next match we win again 3-0.  The female opponent complains to me that they didn't do well because they don't practice together.  I didn't have the heart to tell her Brian and I never do.  lol.

The next match is against some friends of mine.  They are the first team to get a game on us.  So, we definitely won't win 3-0 this time and keep our streak going, lol. But that's okay.  ;)  When the score is 1-1, I come with an amazing shot!  I even hear someone shout "good shot" from another table.  Well, I guess that got to me because I was too pumped up and missed the 8ball next.  :(  Our opponents go up 2 games to 1 in a race to 3.

I get bummed and yearn for confidence from Brian because I feel pretty bad.  I recognized at that point that if I get full support and compliments from my partner who helps me try to reverse the negative thoughts in my mind, I will get over embarrassing situations quicker.  Otherwise, I just want to crawl under a rock because I am embarrassed and because I feel like I am disappointing my partner. :(

He noticed I wasn't happy (I wasn't smiling anymore and being super quiet) and he gave me a big hug and told me it was okay and we would do fine.  I felt much better as he hugged me and even tho I was nervous and still a little apprehensive, we ran out the next rack after some good safeties to tie the score 2-2.  In the next game, they only had one ball left while our solids were covering the rest of the felt.  We took advantage of that and kept playing safeties until we earned ball-in-hand to run out (and we ran out good!).

We then played in the hotseat and won 3-1.  I made a few mistakes because I had lost a little focus because I admit the team wasn't that good.  But we won the hotseat!

I am not exaggerating, either.

Brian was getting frustrated.

It was getting late.

But we were determined to win that top place prize (and I wanted that dang trophy!).

We played a really good team in the finals that played well together, but we played much stronger and dominated with a 3-0 win at 330am! 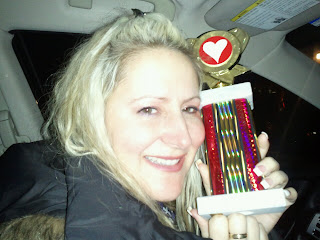 We win about $340 and trophies!  Brian jokes "you won two trophies!" because he wasn't about to take it home with him.  lol.

Brian and I play real good together - I am lucky! 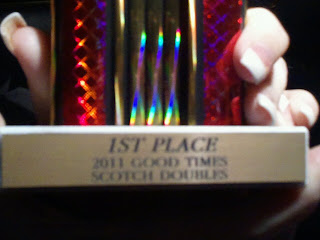