I'm not trying to be like PoolSnark over at blog Pool Cue News and Review. I swear!  He is the one that normally talks about gossip-type things but I guess today it will be me.  Since I visit People.com once a day, that makes me an expert, right?  lol.

At the WPBA-recognized event (previously known as the Regional Tour Championships) held in Houston last weekend, Yu Ram Cha went scathing through the 63 other players to win the event.

A second chance tournament was held starting Saturday night for those not in the main event and the pool room's owner gracioiusly added $500 to it.

I'm not at the event, I'm tucked away in my bed at home 4 hours away getting rest for a big poker tourney the next day.  About 11pm that night, I start getting texts and phone calls about two players who are playing pool in their bras!  What?  WTH is going on down there!?

Turns out two players (I wont name names) in the second chance event were playing a match and tried to out-do each other to get attention.  When one took their shirt off, so the other followed.  As expected, everyone grabbed their cell phones to take photos and videos.  The crowd gathered (imagine that) and the attention-ploy worked!

Eventually, enough people complained to the Tournament Director who then came rushing over and immediately disqualified them.  The TD happened to walk over when it was hill-hill and one of the players was on the 8ball.

Words were exchanged, shirts were put back on, apologies were stated, some tears might have been shed, and explanations and also defending was going on.  I heard they were indeed allowed to finish that last game (not sure why).

As a WPBA-recognized event, I'm sure embarrassment is rampant right now.  It was still a very good, well-run, successful event, tho!  This black eye is nothing they should be ashamed of.  Heck, I don't even consider it a black eye - it's just another thing that happened to happen at a tournament.  Hell, I've heard of much worse.

My thinking is, tho, maybe this should catch on!  Everyone complains about how pool isn't mainstream and we need more sponsors and pool is hurting and no one cares about us, blah blah blah.

Maybe this should be our new marketing scheme! Playing pool in bras! 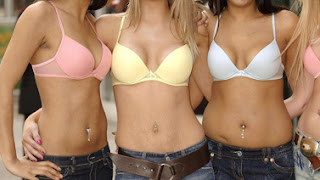 I'm stunned that the pictures of this haven't surfaced already.