I was SO hoping AZBilliards.com would get a Victory V Pose of the winner of the Steve Mizerak Championship this past weekend so we could have THREE Victory V Poses on the three windows on the front page of AZB.

The Victory V Pose?  You know.... when after a huge win the champion throws their arms up the air with excitement, almost in the shape of a V.  See Darren Appleton and Jasmin Ouschan below for the perfect Victory V pose after their very successful recent wins. 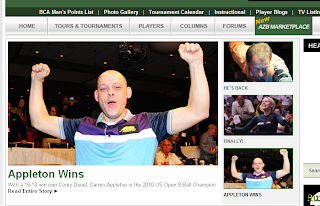 It would have been so cool if we had a Victory V Pose of the eventual winner, Mr. Earl Strickland (congrats, Earl, btw) to add to the Victory V Pose gallery that was abound on the front page.  But alas... :(

I contacted Mike Howerton (my partner at AZB) and he said he had hoped to get a trophy shot of Earl from the Seminole Tribe, but they hadn't sent him a pic yet.  Dang... I was hoping!  Three Victory V Poses would have looked awesome on AZBilliards.com.

It would have made for a better blog entry, too, lmao.
Posted by Melinda at 11:01 AM