I went to Rusty's Billiards on Tuesday (November 23). They were having a $1,000-a-ball break contest!  (read the rules here)

While I was there, I saw Fred (the oldest pool player I know). He will be 90 in March!!  I interrupted his one pocket game to snap a photo with him. He calls me his girlfriend - luckily he likes younger women.  :) 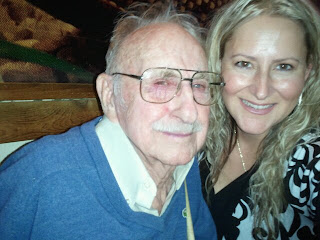 Fred and I
My friend Brian won the tourney undefeated! (nice $100 win for me as I happened to pay his entry fee because he didn't want to break a $50 bill, so we split the first place winnings.  Yay!)

And Steve Game won $8,000 in the break contest!  (that's not a typo!)  Corey Anderson was drawn first but couldn't make the 1ball because it was too tricky-laying after the break.  Steve made a ball on the break and had a potential run but had to play smart to win it all  - and he did it!!  It was awesome to see someone win that much money like that.

Ashley and I sparred two sets but she started me drinking too early and she ran over me, lol.  But her and I had a fun night!
Posted by Melinda at 9:31 AM