My second match was against Jasmin Ouschan at 6pm on Thursday. Yea, you know, that blond from some "A" country who plays pretty sporty. Oh, and was the #1 seed of this event. :)

I was "numb" again going into this match, just as I was in my first match earlier in the day - not nervous, not thinking ahead, had no worries or concerns. I wasn't scared of Jasmin - who was I to be scared? I had nothing to lose; I was just going to continue to experience my first pro event.
Jasmin and I had to wait on our table to be available, and as I sat around, I sat near some guys who analyzed EVERY SINGLE shot of the match we were waiting on between Naomi and Gerda. I finally had to move - I knew they'd be watching Jasmin's match and couldn't listen to their comments and second guesses any more.
The match we were waiting on was very good, btw! Gerda had won in San Diego in the Spring, but Naomi was a force to be reckoned with. It went hill-hill and it was a brutal win for Gerda when she went for a two-way shot and missed the 8ball. Naomi fired the 8 ball in but the cueball somehow slid behind the 9 and scratched. WOW!
Jasmin immediately hits some balls on our now-open table and then asks if I want to hit any, and I say, "no thank you" as I felt comfy from earlier in the day. We lag, I lose. I rack.
She wins the first game well. The next game she struggles with the 8 ball and accidentally makes it in the wrong pocket and apologies sweetly by raising her her hand toward me to say "sorry." She easily made the straight in 9 ball. Down 0-2. I still sit there with my chin up, back straight, no worries at all. I get to the table in the third game, but I play safe but it wasn't good enough. But, she missed another 8ball, but left a thin cut that I could hardly see behind the 9 ball. I missed it (barely) and she got out. Next game I break and am running out but miss a tough 7 ball that I left myself. She gets out. Next game she misses a 7 ball, but it rests tough and I can't make it. Down 5-0. Next game I am running out again from the break but hit the 8 ball too hard and it goes in another pocket. Oops, sorry! I then, FINALLY, make a 9ball, but I scratch! lol. A few guys in the stand laugh, but I don't let it get to me. 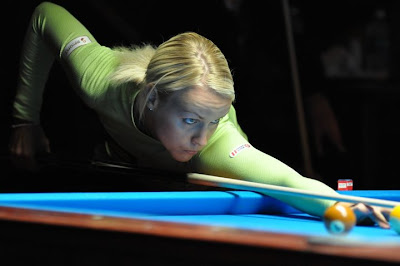 Jasmin (photo courtesy and copyright of Anne Craig)
I was running out again and had an out but missed a 7 or 6 ball and she got out. I wasn't nervous or anything, though! I just wasn't shooting that well late in the rack. Talk about GIVING opportunities! When she had me 0-8, she scratched but I missed a tough ball-in-hand to get shape (eeek) and she got out.
She skunked me! I win my first match but then lose 0-9. WOW!! Look at me! lol.

However, I'm most proud I had NO negative thoughts, no embarrassment, wasn't nervous, didn't get mad/upset/frustrated, or anything. There were more people in the crown than there was at 10am and I still wasn't nervous - I felt "in my element" (even though I lost 0-9). I am very happy about my mental attitude. :)
I admit I had chances and could have won 4-5 games. Can you imagine? I might have put pressure on the number one seed (I didn't know she was the number one seed until they made the announcements, nice!). I admit I was surprised how many chances I got, though. 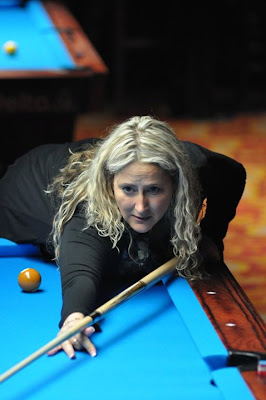 Me (photo courtesy and copyright of Anne Craig)
Right after the match, I found a seat next to my friends to watch Lisa Marr (fellow OB Cues Tour player) play her 745pm match and a guy came right up to me and asked me to sign his pamphlet. I said, "sure" and even personalized it:

It was cool of him to ask me for my John Hancock, even though I had just lost 9-0! He didn't care I had just lost, he was a fan of the women players. It goes to show how popular the WPBA is!
Posted by Melinda at 3:08 PM