Day Two of the Women's U.S. Open was a completely different story for me, mentally. Remember my description of "numb"? Well, it was not in the Melinda vocabulary this day.

I heard the night before I was going to be playing Megan Smith and I became nervous at that very moment, and forward. :( I think the difference was I didn't try to get over being nervous before I played her. When I felt the pressure to play Kim White, I admittedly accidentally kinda rationalized in my brain about the match and my feelings. I didn't plan to do that, but I wonder if that helped me not being nervous the previous day?

I got enough sleep the night before and then drank a lot of water as I watched my friends in the 10am round. I felt "okay," but texted Cristina Dela Garza that I was nervous. She reminded me to just breathe, but it really was too late for me. :( 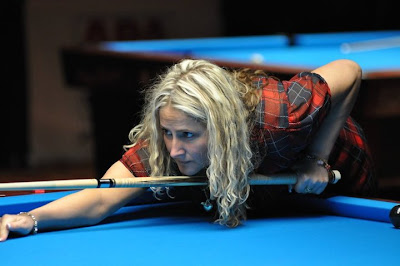 Me, playing Megan, (photo courtesy and copyright of Anne Craig)
Megan has been playing very well lately - doing well in a men's event in Houston the weekend before, winning two state championships in the NE in the last two months, etc. I knew her game was way up there and I was nervous. Yea yea, I know, you aren't suppose to play the person.

But, I fully acknowledge that even if I wasn't nervous, I MAY have won only 3 games on her. She played SO well! Her safes were meaningful and smart (she three-fouled me one game) and she hid me very well many many times! She really only missed a few balls - she had nice patterns and great shots throughout the match.

I finally talked myself OUT of my nervousness at 0-6, but I didn't get enough opportunities to win not even one other game. :( Yes, I lost 0-9, AGAIN!

I felt good to not be nervous at the end, but there sure were a lot more people watching than Thursday. Wow! It was so cool! 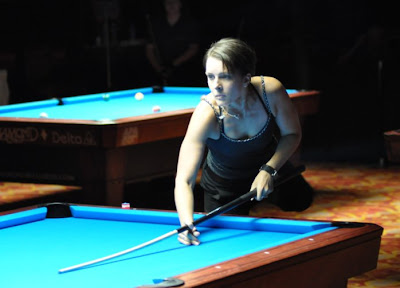 Megan Smith, (photo courtesy and copyright of Anne Craig)
After the match, while we put our cues up, I told her I was nervous against her, and told her she played SO good. She thanked me and then added, "you know, I saw your match with Kim White. You played really good - I had no idea you could play that well." OMG! That meant so much! She told me she understands that each match is different, when I told her I was nervous against her, and I reiterated gain how solid her safes were. But, it meant a lot she told me that about my other match - I didn't feel bad at all losing 0-9, lol!

A friend of mine watched that match with Megan and told me via email after the tourney, "I thought you did a good job. And fundamentally, you are very solid. It's a lot of pressure playing in that format."

He knows I have been struggling with my fundamentals and staying down, so his comments resonated with how I truly felt about the tourney - that I held my own under the circumstances.

As one who was there, wishing you the best, I thought you made a great showing. Although I missed your first match, not arriving until Thursday afternoon, you looked very comfortable in your match against Jasmin. I'm really not sure she's human. I think she may be a Terminator, sent from the future to kill the pool-playing John Connor or something.
Seriously, though, congrats on a great first pro event. I am sure it won't be the last. Keep your eyes open for my pics on FB. I'll be sure to let you know when I get them posted.