Warning: Because this was my first pro event, I thought I would write out each match in detail, because it was such an amazing experience (and because otherwise one blog post about the US Open would be WAY too long).

My first match at the Women's U.S. Open was in the very first round: at 10am Thursday morning. I didn't go to the player's meeting the night before because I was driving TO the venue (3 hours from my house) while the player's meeting was going on (I got an invite last minute to fill a spot). I therefore needed to get to the tourney room earlier than usual so I could not only warm up, but also complete all my paper work in order to even play in the tourney: fill out a bio form, pay my entry fees, and get my stinkin' badge.
My match was on the end table, on the right side of the tourney room that was filled with 8 tables total, and my opponent was Kim White, ranked 20th on the WPBA. She is from Texas, too, so it was kinda cool I was playing someone I knew. But, when I found out the night before I would be playing her, I felt a lot of pressure. 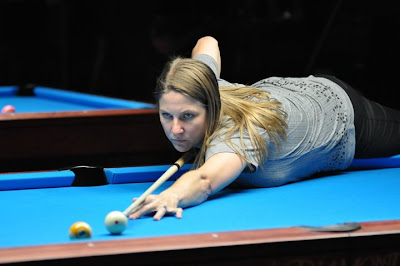 Kim White (photo courtesy and copyright of Anne Craig)
But then I came to the conclusion that "hey, she is suppose to win and everyone knows that and therefore I shouldn't be embarrassed by my friends when she beats me."

While I hit some balls on the table to warm up Thursday morning, I was hitting them well and admit I was feeling super comfortable. I was staying down and making shots. I felt good. I love Diamond tables, and love nine foots, too! I then practiced many bank shots to try and figure out the bankness of the beautiful Diamond tables. Kim came up and said hello and hit some balls again herself. I then hit a few long shots (still trying to figure out how to make a long straight-in shot).

As I mentioned to NYCGrind.com when they interviewed me, my goal was to get comfortable in my surroundings. “I was invited at 4:50 on Wednesday and needed to let them know by 5:00 whether I would play, so I had no time to anticipate it much,” said Melinda, ”The most important thing to me when I arrived was was to get on the table and get comfortable. With playing under different conditions with the crowd and the new atmosphere, my goal was to do everything possible to get comfortable in that setting.”

I would describe my demeanor going into the match as "numb." What I would come to realize later was this "numb feeling" I had is when I play my best, no matter what tournament - I have no expectations, no fear, no worries, no negative thoughts... while I am still very aware of where I am. Being "numb" is VERY difficult to describe. It might be "in the zone" but I have been in the zone and it feels nothing like "numb." What surprised me is I felt "numb" in my first pro event match. I wont ever be able to describe why, though.

I was running out the first rack and felt pretty good! I missed shape on the 6 (or 7?) ball and had to play safe. She missed the kick and I got ball in hand and ran out. Eeeek, that felt good. :)

Before I go on, let me mention my goal in this whole tournament was get to FOUR GAMES (yes, total, in the two matches I would play).
Side note: the players have to mark down stats per game on a piece of paper for every match. Who won, balls on the break, push outs, scratches on the break, break and runs, etc. So, I was figuring this all out while we were playing.

In the second game, she misses a tough 9ball and then leaves me tough. I'm almost on the rail, length table, could scratch in the side. I just simply told myself to stay down and had no expectations, and I made it. WOW! I got a few claps, but not loud, but it was coolio.

I then somehow, miraculously, found myself up 5-0. Five to zero? Kim took a break at this point. While I was playing good, she wasn't having a good time at the table. I realized the break could ice me over, as I went to the bathroom to wash my hands. It was so STICKY in the tourney room. The humidity was brutal to our cues and hands! Everyone was talking about it, and using the towels, baby powder, and shaft cleaners to the max, so hand washing was a must right now. 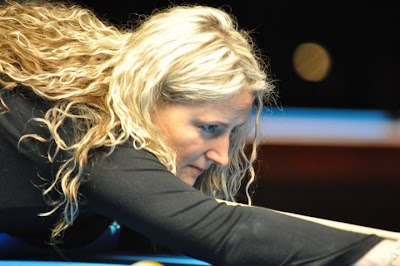 Me (photo courtesy and copyright of Anne Craig)
When we came back, I knew she would literally come back on me in the match, but I somehow found myself up 7-2. At this point, my heart is beating out of my chest. I am trying to take deep breathes but the pressure of being ahead was so strong in my heart, body and mind. Many times I found myself at the table with a decent layout, but couldn't get out! I got too close to a 5 ball, missed it and she got out. I got too close to a 6 ball, missed it, she got out. I was running out and knew this other tough 6 in front of me was make-able but I missed it thinking about shape. The pressure was immense. She got out. Every time she made a nine ball, the claps for her were loud with support. But, I have learned that the claps aren't against me, they are just for her, so they didn't get to me, but I was aware what was going on around me. I also was checking out the scores of all my friends across the room. It was cool to see Kim Pierce, JoAnn Ashton, Ashley Nandrasy, and Jennifer Kraber all playing along side me.
At 7-6 me, I broke. After I won that match and then racked, I sat down and wondered, "did I just break and run?" I looked down at the little score sheet thingy and sure enough she marked down that I just broke and ran! I did that to get on the hill - really? I had no idea!
She won another game to inch the score closer 8-7. Then we had a brutal game. I missed a long straight in shot, she missed a 6 ball, then I hooked myself on the 7! Then we played safe on the 7 but she hit it beautifully! But the table rolled too much for her after the 8 and left her a funny angle on the 9 ball in the side. I thought she was going to make it and I told myself I would be very happy to say I lost hill-hill my first pro event against Kim White. But, she missed the off-angle shot and I had an on-the-rail straight in 9ball shot in the side. All I remembered while I was down on this shot was I had a similar shot in April in a big team event that I completely DOGGED by jumping up because I was so nervous at what was at stake. I vowed to not let that happen this time and I stayed down on my shot, even with the brick on my chest, and made the 9ball to win 9-7! The claps were much louder, and I could hear a small group of people in a different area clapping loudly for me (must be where my friends were now watching from).

She shook my hand and gave me a hug and told me I played really well. I almost started crying - that meant so much that she told me that after the match she had. SO MUCH!

I gathered my things and tried to figure out how to finish scoring, where to turn it in, etc. I was shaking. I was in aww. I was shaking!

I finally walked to the back and there was Lisa and Ashley and when they hugged me I cried. It just came out. I couldn't believe I won! My first pro event and I won a match? WOW. We then all went outside the tourney room and Ravee told me he was keeping Amanda updated via texts, but I called her anyway, lol. Then I called Rebecca and she was so happy for me, too. Then... I called Mom. I called and told her I won and I was crying telling her what happened, and she joined me in crying. OMG, writing this I sound like a little girl! But I was SO happy she "witnessed" my first pro tourney and that I could call her to tell her I won my first pro match. She sounded so happy for me. :)

Ashley and I then went to our room to do the Vlog (video blog) update. I updated peeps on AZB and FB, then Ashley and her Dad and I went to Chilli's. I then rested in the room for my next match at 6pm.