When I called him to set up our appointment to play, he also asked my opinion about our league divisions. This is his first season in the straight pool league.

Basically, he wants to play better players, but do it by creating a new division. His proposal is to take the top 5 in our division and the bottom 5 in the top tier division and create another division.

I told him I liked where I was and I was trying to ace my own division. I know I wouldn't be able to do that in this newly created one. He went on to compliment my game and told me I played well and that I should be playing in the upper division. I expressed to him even tho I might be 8-1 now, that the season isn't over yet! Plus, that some of the other good players took the summer off, and normally my stats wouldn't be this good.

Then he asked for my previous stats. Really? So, I told him. Yea, see, buddy? Not that good - I'm just having a good season for the moment.

He said he was going to ask the top players of our division their thoughts before he approached the league director, in case he was off base.

Why can't he just go play in the upper division!? He said he doesn't want to play the top top players or something. Well, so.... instead he wants to create a new, separate division that affects all these people??

OMG, I'm perturbed. So, of course I feel sharked. Obviously this is my own mind creating angst but I admit some things can get into my head. I know from experience that compliments can affect one's play. And top that off with his suggestion of a new division, I admit I'm all riled up!

Prolly silly to admit - but it probably wouldn't bother me to be self-sharked if it was gonna be an easy match, hehehe.

Oh, and BTW, I deliberately wore today my "I Love Boobies" pink bracelet. Maybe it will shark him!! It's for Breast Cancer Awareness, but who knows what he will think - check out the pics of the bracelet: 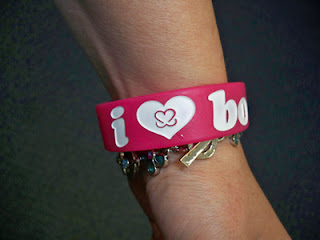 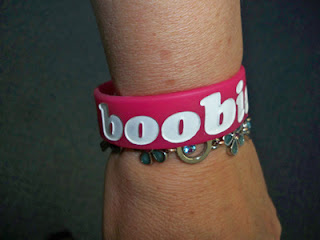 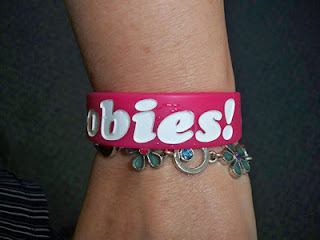