Figured I'd finally write my recap from April of my tournament at the OB Cues Ladies Tour stop. I know, you all have been waiting patiently. Well, you can finally sleep now! 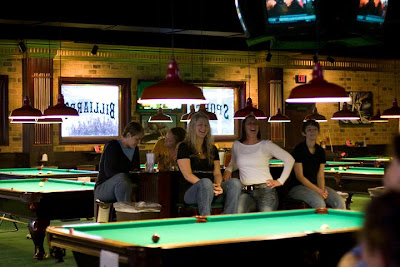 Amanda and I crackin' up during the Player's Meeting
After the players meeting and draw, Ashley came up to me and told me we are playing against each other on the Stream Table before they announced the table assignments. I wondered why she told me that, but I went to the table and played our match. I think I lost 7-4. I didn't play all that badly, but she played better than I and so was happy she moved on.

With almost 23 tables, I didn't have to wait long for my next match. I won that one without much pressure, but my next one-loss side match was against a semi-new girl from the Houston-area who really has a fabulous game! If she would have made just a few more key balls, I would have lost. I was very impressed with her game and told her and her husband afterwards how talented she is and should attend more events. Her name was Loretta Lindgren.

Then I went to dinner with my friends, including the Area Manager for the Fast Eddie's Billiards pool rooms for all of Texas, Darren. We ate at Salt Grass. Yummy for my tummy! 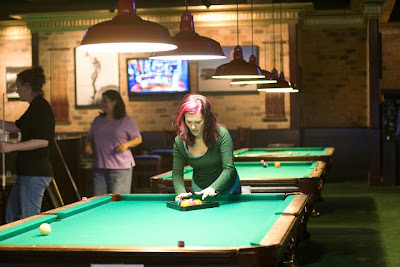 Eventual winner, Ashley Nandrasy! Her FIRST OB Stop win!
On Saturday night I tried to get some sleep, but as usual I didn't feel completely rested on Sunday morning. :( I knew I was to play the tough opponent, Orietta Strickland, in my 10am-for-9th-place-match. She is a tough competitor and has been for many years, although I have defeated her in the past. I decided to take some Claritin in the morning and even though in the past I had no side effects, and I actually felt it enhanced my focus, on this crisp morning, I didn't feel myself. I played super bad, felt uncomfortable and it almost felt like I couldn't concentrate on the shot in front of me. I was not getting out with two balls left on the table! It was brutal. At one point, she even said, "you aren't playing like yourself." I was down prolly 5-1 or something and only was able to tie it 5-5 because of her mistakes late in the rack, NOT because I was running out. It goes go hill-hill miraculously (I honestly don't know how) and I got straight in on the 8 ball, and the little 9 ball was at the other end of the table, unfortunately for me. I drew back, had the wrong English, and the cueball died. lol. I had a tough, long cut, and missed it. She made the tough 9ball and won the match. I placed 9th, tho, so not too shabby I suppose.

BTW, during the Player's Meeting I was presented these wonderful cakeballs by Shayla for my Feb Birthday. Red Velvet Chocolate! Yum! 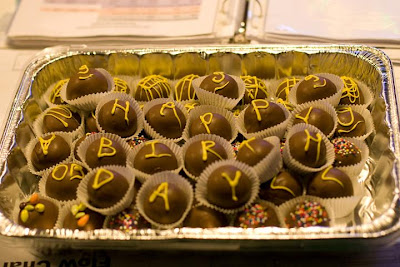