I hadn't been to the famous Houston Open in several years for various reasons - mainly because the women's event is only played on Sunday and the pool room is 5-6 hours from my house so I turn into a big baby about the long drive. I don't mind going to Legend's Billiards in League City for two-day women's tourneys, but the one-day tourneys on a Sunday that are far from my house can be tough for those that have to be at work early Monday. This year I happened to take of on Monday for my Mother's/Daughter weekend that we had to postpone, so I slyly just kept the day off and went down to the Open. :) 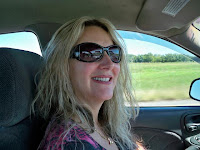 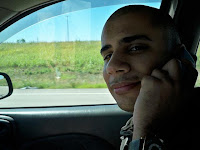 Zaid, always on the phone 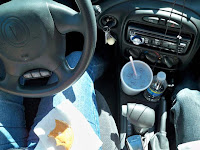 My lap - Mickey D's for lunch! (safety hazard, I know)
Even more perfect was that the hotel was right behind the pool room so I didn't need a car all weekend. Furthermore, several restaurants were within walking distance but that wasn't necessary anyway though as it is secretly known that Legend's Billiards has the BEST pizza's! As a matter of fact, after dropping Zaid off in North Houston, fighting traffic in his car (he would pick it up Saturday) to drive to South Houston, and then checking in to the hotel, my first order of business was to immediately get my arse to the pool room to grab a drink with Shayla and order a pizza! Ahh.... Good times!

Eventually, Yvette, Barbara, Frank, and Grady showed up to join us. Shayla was hitting balls most of the evening but in the middle of some down time, I grabbed her cue and hit some balls. She has an OB Cue with an OB-2 shaft. I immediately fell in love with it and wished I had one to play with that weekend! Many drinks later, watching the one pocket action in the middle room, and after some fun pics, it was time to walk my arse back to the hotel to rest my weary eyes. I ran into many friends who showed up at Legend's Friday night to ensure they signed up for the big tournament and it was fun to just hang out. 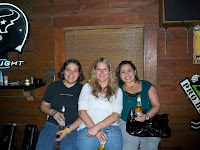 Shayla, Me and Yvette 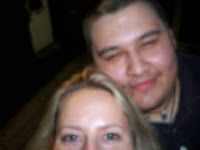 Me and Frank Jr - sometimes the blurry photos are the
funniest! Like this one! LOL

Here is the non blurry version: 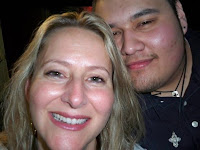 On Saturday, the first thing I did when arriving at the pool room was to order another pizza. :) I mostly vegged, watched the men's event, caught up with a lot of friends, and watched gambling into the night. It meant so much that so many people asked how my Mom was doing. I was able to spend quality time with the author Carl Miller, Belinda Lee from Houston, Dennis and Lanney, and Bill Tippit who was a great friend to the late Dan Freeman. I also ran into the ever-friendly Sarah Rousey who actually had her eyes open for this pic! 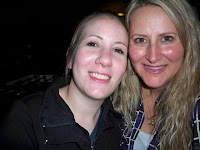 Sarah Rousey and I
Sunday morning I was super exhausted, but nothing a GREAT pizza from Legend's couldn't help with! Viet and I bought together a few of the lady players in the auction and then they called my non-bye first match. I would play my dear friend, future teammate, and co-commentator, Ash (Ashley). We were on the table that everyone had to walk by but it didn't bother either of us. I was freezing though as it was super cold - I was afraid I was going to turn into a popsicle! - but was able to ask someone to get my sweater so I was able to warm up during the match thankfully. I didn't know how I was staying down (b/c I was so tired) but I was able to for some reason. I am not sure how I won, because she was playing well but I was able to get out a few times and was ahead. While on the hill, I had about three chances to win and didn't close out the match. She said something about that to me but I already knew it - it was pretty obvious I should have won that game, lol. I also knew that wouldn't happen the next game - 'I would persevere,' I told myself. lol. And I did. I think 7-4 or 7-5.

My straight pool coach texted me and reminded me to stay down and so that was a nice surprise to hear some positive thoughts from him - I didn't get the message until after that match so I carried it with me to my next opponent.

I then had to play the ever formidable player Michelle Ram. She made a few mistakes in the beginning and I was able to capitalize while I waw also playing well. I was ahead 5-3 and she took a break. When she came back, the tides turned and I lost focus at the same time. I didn't shoot an 8 hard enough and missed shape on the 9, then missed the 9. She got that game and also started to play better. I didn't make a couple tough 9s she left me and she came back to beat me 7-5. I know that felt good for her and was glad she started to play better.

I then played Kim Pierce next. The one-loss side is a race to 5 so it can be over rather quickly if one isn't paying attention... which I found myself in that exact situation! I was down 3-1 then 4-2 and told myself, "This is the Houston Open, wake up and focus, Melinda." I then beared down and started to stay down better and I won the set 5-4! I was shocked! Then I played Michelle Abernathy who wasn't playing her game well - she said afterwards she is in a rut, which means when she comes out of it, she will be playing even better - can't wait to see. I think I won 5-2.

I then played Terry Petrosino next. It was on the same table as when I had played Kim earlier and ironically, I went through the same non-focus in the beginning of the match and had to bear down from down 4-2 (again) to start to play well. I did start to play better and I tied it up 4-4 and I felt great. I had a chance to safety Terry with ball-in-hand but instead, the tricky shot led to a straight-in shot, not a safety. Opps. Eeek! Can't do that against Terry. She ran out beautifully that rack. She is a great player with excellent fundamentals. She would go on to get 2nd place!

I placed 9th and was very pleasantly surprised to get an envelope with money in it from the awesome tournament director, Mindy! I got $30 and appreciate the Houston Open even more because they pay deep for the women.

Mindy and Ted put on such a great tournament. I hope to return next year. Of course, I will be at Legend's in November for the OB Ladies Tour stop, too. Can't wait to hug Mindy and have pizza's!