This was the second time Rusty's Billiards hosted the OB Cues Ladies Tour just this year! This is the stop that is closest to my home (10-15 minutes away) so I always look forward to this event. :)

What was different about this event was for me was: Timing. I was in Maryland for work the entire week before and flew in late Friday night. Then on Monday morning, I was to fly back out again for work and be gone for ten days. So, it was a little stressful for me knowing I wouldn't really be home for three weeks.

I played my dear friend Debbie Watson first after a bye. We have a closeness because her Mom had emphysema, which is what my Mom has. Her and her husband have always genuinely asked how Mom and I are doing and it means a lot. Debbie's game has improved but I was able to win 7-3.

I then played Tina Lehrmann next. Her game has also improved and we kept it close until the end and I won 7-5.

I then had to play my good friend Cristina Dela Garza. The winner of this match would be on the winner's on Sunday. It was getting late and a lot of people were watching our match but her and I always play pool, not worry about friendship (which can easily come into play playing girl friends). We both played as good as we could, but we each knew we could play better. I missed a crucial 7ball and then another 7ball but I tried to not focus on those misses and instead figure out why so I could get back to playing. Eventually it went 6-6 in a race to 7. I missed shape on the 3 and accidentally hit the 4 which led to a tough shot to get shape on the 6. Sure enough, I missed the 6 ball. She had to jack up to make the 6ball (they were close together) and that led to misshape on the 7 ball. She hit the 7 well but it did not go in. I had to back cut the 7ball and admittedly, I made my decision WAY to fast and got down on the ball too quickly, but I still made it and also made the could-have-been-better-shape on the 9ball.

Here is the lovely Cristina: 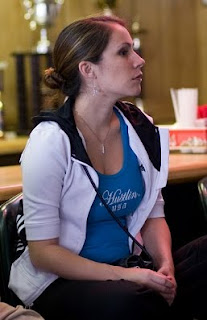 I waited around in the late evening to watch Ashley and Cristina make it until Sunday with their wins. I also saw my good friends Christy and Monica place 9th (yay!). 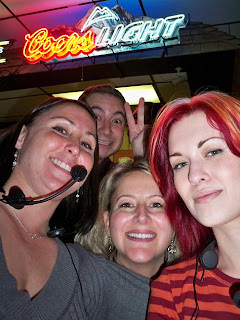 Amanda, Me and Ashley with Chris in the background! 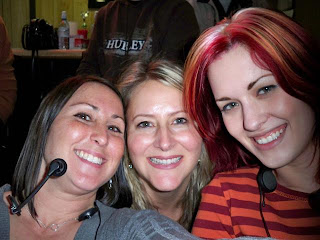 Amanda, Me and Ashley - Take Four! LOL
Sunday came and I had to play the beautiful and talented Ms Lampert - me dear, dear friend (you know, my camera hog buddy, lmao! [see above and all my other posts, lol]). I won the first game and was feeling great but let some things bother me and I was not able to capitalize. Toward the end of the match, I decided to have fun and was able to not get upset like I easily could have. I think I lost 4-7?

I then had to play Orietta Strickland. I was in this exact same spot with her back in January - same table, same day, same place, unfortunately, same outcome. :(

She was making uncharacteristic mistakes on the 8 ball VERY often. So often, it became down right ghostly! The first game she got bad shape on the 8 and had to play safe but I got out. then the next game or game after, she missed the 8. I found myself up 3-1 and then she rolled out and I ran out! Then she scratched and I ran out! I felt very well about my play but knew not to think ahead and never did. She missed another shot and I got out and got on the hill. I think at this point it was 6-3 or something. She missed the 8 AGAIN after bad shape and I had an 8-9 carom and I shot it WAY too fast - i.e., I made my decision fast and got down on the shot fast. I knew if I missed, the 8 would be at the other end of the table and left tough, but after my stupid miss on the carom, she made it 8ball quite nicely. Then she got out to make it 6-4. Then she missed a 7ball and I again got down on the shot too fast, but I knew I had to thin it to get shape on the 8ball. I thinned it, but not enough and even though the shot on the 8 was tough, I beared down on it... but missed. :( She got out. I overheard the commentators of the stream say I needed to thin it, but that it was I tried to do on the 7ball. Next game I was staring at a tough 8 ball that she had missed in the side and I studied it for a long time, debating on whether to play safe, cut it or bank it. I decided to back bank it in the side but I miscued! Ugh! She got out. Another game she missed the 8 ball and it was perfect for me to bank but I didn't know or didn't remember that that was the dead rail and the 8 barely moved when I hit it, and she won that one also. I lost 6-7 and was extremely upset. More upset than I have been in a long time - actually, more upset the last time we played in Jan. I was sick. SICK SICK SICK.

I actually bitched and moaned from being embarrassed and upset about my loss - I whined; I admit it. My emotions completely took over and I whined. I will write another article about that sometime.

I wasn't happy I bitched and whined and had to eventually accept the fact that I am human and needed to accept I bitched out loud - I normally don't do that and was quite embarrassed at my lack of control to keep quiet, but I was pretty hot.

You can view my match at this link: http://www.ustream.tv/recorded/2423632 . Shayla recorded some of the matches from the tourney and she also streamed all weekend. It was awesome!

So, I placed 5th and should have been excited but I was sick right after the loss. People told me "congrat's", "great finish", "you played well," etc., but I didn't see that right away. :( 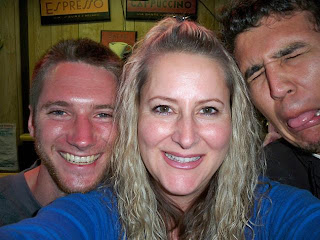 Sean Black, me and the comical Eric Aicinena, LMAO! 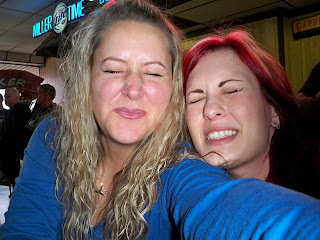 Me and Ash trying to make funny faces, hehe.
I watched some of rest of the matches of the tournament and even commentated some and eventually calmed down. I then decided to check out where I stood in the rankings - I knew I needed to place well to move back into the top ten on this tour but didn't but pressure on me to do well (like I did in Waco). I figured out the math... and..... I was back in the top ten baby! I was SO happy! The sickness then led to happiness as I found out this new realization! I interrupted Monica to express my happiness and she hugged me with all her might knowing it meant a lot to me.

Many people think it's because I want to go to the Regional Tour Championship, but that is not the reason. The reason is because I have been in the top ten of this tour for 7 out of the last 8 years. I also earned Most Improved Player last year and felt dropping out of the top ten wouldn't really be par for the course of an MIP, right? Right.

Obviously I have one more stop left this year and I could feasibly move down right below the top ten. But I am still happy at this juncture that after missing one stop and having one previous bad finish this year, that I am back in the top ten! :) Me, posing for the great photographer, Shayla. 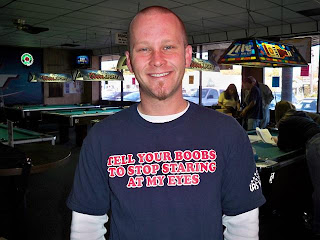 This is the boyfriend of one of my friends, and his shirt made us all laugh! So of course I had to take a pic!
Posted by Melinda at 2:02 PM