The final stop of the 2011 OB Cues Tour Season was held the weekend of Nov 5th in San Leon, Texas at Casper's Billiards.  I've already posted a cool video tour of this amazing pool room and also a neat video compilation of our road trip, but how did I do in the tourney?

After my first successful Texas State title win, how would I fair in my next big tourney?  More importantly, what did I find out about myself and this lovely game of pool during the weekend of the Season Finale?

After a couple of league nights and a couple of weekly tourneys since my "big" win, I had already figured out that after you win a big tourney, you don't magically win everything from that point on.  lmao.

And to top it off, the invisible pressure we put on ourselves is immense.  I felt I had all eyes on me.  "She just won a tourney, why isn't she getting out in this rack?" I envisioned my league mates and league opponents thinking.  LOL.  Invisible pressure is like a tightly wrapped invisible cloak - you are trapped in this blanket and can barely move yours arms properly anymore.  It sucks, lol.

I didn't feel like I had the "It Factor" the morning of the Season Finale.  The "It Factor" is me being numb to nerves or expectations.  Instead, I was a little leery how I would fair, which is already a bad sign for me.  I'm already "worried" or "concerned" and they hadn't even done the draw yet!

I admit, I was surrounded by great players.  It was a very tough field.  And let's face it, I haven't yet placed better than 4th in any OB Cues Ladies Tour Stop (ever).

About 45 ladies were eligible for the Season Finale but only 27 showed up.  Members had to play in at least 2 stops during the year to be able to play in the Season Finale, where they added an additional $1,000 to the already guaranteed $2,000 event!

I am actually disheartened to realize I won the Oct tourney because I was in the zone.  Sure, skill had something to do with it - I have years of experience, vast knowledge of the game, and obviously good mechanics when I'm on auto-pilot (the zone).  But, it's kind of a somber/sober realization for me:  I might need to be in the zone to do super well again.

Because we all know how tough it is to get in the zone.  :(

What was reiterated loudly to me again at THIS particular tourney is if I have too much going through my brain, too much pressure on my shoulders, nerves filling my soul, and thinking ahead about possibilities, I cannot function well on the pool table.

And that my friends is the complete opposite of being "in the zone."

My arms get wobbly, my adrenaline races through my veins, my mind is full of so many different thoughts flying around at once, and therefore my pre-shot routine suffers and I miss shots under pressure.

Bottom line - I lost matches I could have won if I wasn't nervous or thinking too much.  And I won the matches where I felt no pressure.

If I had a stronger mental attitude, I would have easily lasted until Sunday.

However, this "misfortune" then "granted" me the chance to play on Sunday in the Second Chance event.  With 14 players, I look around the room and feel pretty dang good about my chances.  I'm one of the better players in this field and so my confidence already starts to go up.

I won my first three matches pretty easy (and with one unlucky scratch by a competitor) to make it to the hotseat.  I lost that match only hill-hill (I didn't focus toward the end and it cost me the match).

I got to the finals with a 4-0 win and then proceeded to win the first set in the finals also by a score of 4-0.  But I lost the second set 2-4 because my opponent played better and because I didn't play as well.  I just got tired and didn't focus as much; let things get in my mind again. 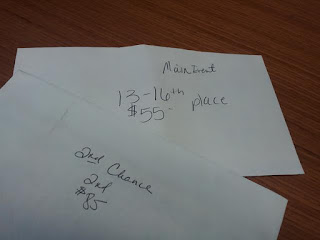 As I watched some of the main event matches on Sunday afternoon, it hit me hard that the 8 ladies I witnessed competing had their emotions and thoughts contained.  They were playing POOL.  Playing well.  Sure, they prolly felt a little nerves but the difference is they were able to contain their emotions to play properly.

I SO wish I was one of those girls playing on Sunday.  I have been there before, but my mental toughness sucks right now!  I hope it can get back where I know it can be.  Where it has been in the past. 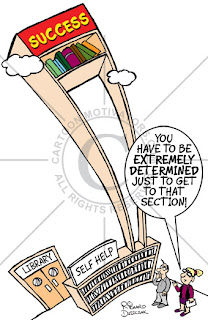 I'm frustrated with this game right now.  It's so mental, and yet my mental game is mush right now.

I tried all my tricks over this weekend to get over my nervousness, negative thoughts, agitation, wants and desires, etc.  I have so many tips I've learned through the years, but I just couldn't overcome my nerves and couldn't stop my brain from thinking too much.

In the tourney I won in Oct, I had no expectations and was just simply happy for every win, and didn't think ahead for wants or desires.  I became almost complacent in my brain and simply felt joy and blessings where I was - AT THAT moment. Whether it was winning the first match, playing for third, happy to be playing in the finals, etc.  No future thinking or pressure entered my mind.  I simply played pool.

And during my "rough" matches in the Season Finale tourney, I tried to get that same "attitude" by reversing what was going on in my head and stomach by using tips I have learned through the years.  I tried to tell myself:

Yet, I want to play in more tournaments.

I am scared of my nerves and the invisible pressure getting in the way of me playing good pool.  I'm scared of traveling all the way to Reno in Feb to only falter from mental mush.

People keep telling me to give myself some time.  It's not even been three months since my Mom's passing and I'm going through a lot.  Time heals and I suppose time is what I need to figure all this out.

That and MORE POOL!

But I will admit something else:  I am confused.  Why is this game so frustrating to me right now?  WTHeck is going on?  I've been playing pool for over 20 years?  Why all of a sudden am I so confused and frustrated!?  And where is my mental toughness dangit!  Who has it?  Give it back!!
Posted by Melinda at 12:38 PM

Have you read "Pleasures of Small Motions"? The author talks about a lot of the tips you mentioned and suggests alternative ways of handling the mental side of the game.

From your post, maybe you're in a time/place to try to mix things up a bit.

I love comments and questions - so thank you!

Yes, I do have that book and have read it. Maybe I should reread it again soon, tho. Thank you!!