I have noticed when someone close passes away, that part of my personality changes.  Either by choice or not, I'm not sure.

I noticed it after my Dad passed away.  I was a "list" person.  I wrote a list for everything.  Had to have one.  Couldn't function without one.  After he passed, no more lists for me.

After my Mom passed, a different, more honest person came about.  I don't mean I lied before.  I mean, I no longer am going to hold back when I should speak up.  I will still continue to be careful HOW I speak my words, but I instead of NOT saying something in fear of hurting others, I'm instead going to try and speak up.

I'll be honest:  I'm tired of not speaking up for myself.

I'm tired of being agitated by people and letting them get to me.

For instance, the other day I played poker at the casino and the guy next to me took up the space under the table with his lanky legs.  He took up too much space and was not considerate of others.  And it annoyed me.  When I do anything in life, I don't want to be annoyed.  I want to be happy.  Not distracted.  Not my mo-jo messed up.  Not my mind irritated and my forehead crinkly with dissatisfaction.

I mentioned it after-the-fact to my b/f and he says, "why didn't you ask him to move?"

I would rather not inconvenience the guy than say something.

One time a pool player's smoke bothered me while I ate.

They noticed and then finally said, "why didn't you just say something?"

Another time some friends made too much noise when I tried to sleep and they told me later, "why didn't you just say something?" 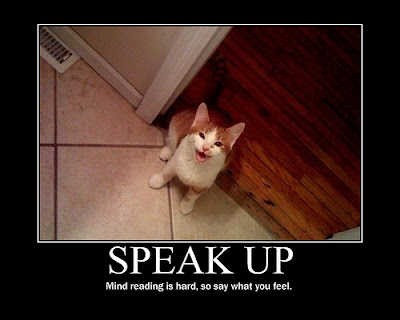 Why would I rather suffer than say something??

I just don't like to inconvenience people.  I'm just too nice, I guess.  I dunno.

I need to realize if I speak up it's not a bad thing and no one will be upset with me.  And even if they get upset with me, who cares, right?  I have a right to be in a happy place.  Right?

I witnessed so many instances in the past where people reacted badly to "suggestions" that maybe I'm nervous to speak up?

I dunno, doesn't sound like me.  I'm a pretty forward and confident woman.

But, what I'm referring to that I want to work on is the atmosphere around my pool matches:  I'm tired of people talking to me when I play pool.

I'm tired of people trying to be funny when I'm in the middle of a straight pool match.

I'm tired to people interfering with my mental game.

I realize I'm "letting" things bother me, but I can have a say so in my environment at times, right?

Like I mentioned in my blog article the other day:  Some guy sat next to our straight pool match and made comments. I thought about asking him to leave.  Thought to myself, "this is the right thing to do.  It's okay to ask him to leave.  It will allow you to focus on your game."

But I never asked him to leave because he eventually kept quiet. Until... my opponent rallied almost 25 points to tie the score.  Then he thinks he's funny, "Let him catch up, huh?"

I've decided (since my Mom's passing) that I wont and shouldn't put up with people like that anymore.  I am tired of letting things get to me.  So, I will speak up more.

Not rudely, of course.

But I need to look out for me.

The difficult part will be my common concern: to be able to ask peeps to be quiet without upsetting MYSELF.  Without making myself feel bad for saying something to them.

I don't know why, but I do feel bad for defending myself sometimes.  And guess what?  Yep, tired of that, too.

I've taken enough leadership classes to politely ask someone to STHU (lol).  I can do it.

I have enough experience with being careful with my words so I don't hurt others.  I do it all the time, actually.  But that's usually when I'm giving advice or when someone asks me for my thoughts.  I don't normally speak up for myself.  So, this is new for me.  Someones gotta stick up for me, right?

Let the practicing begin!
Posted by Melinda at 3:15 PM

This might not even be the same thing... but here is a similar example... Have you ever been talking to someone who has something in their teeth, or hanging from their nose? LOL You know you should say something, but you don't because you know they will get embarrassed when you do. So instead of doing the right thing.. you continue to let them stand there and talk with something on their face. It's kind of the same thing. Instead of telling them they are bothering you, you don't for fear of how embarrassed they might feel for being put on the spot. Let's face it.. most people don't know they are aggravating us with what they are doing unless we flat out tell them right?