Vegas is one of those cool places where one might think, "Hey, I should get a tattoo while I''m in Vegas!"  It's the city of adult fun after all, right?!

Well, while I've never personally got tattooed while in Vegas, just this year two of my friends did.  And I have proof!

Conveniently, the Riviera Casino, which hosts the BCAPL Tourney, has a tattoo parlor in it!  It's literally a few steps from the convention center.  It's called the "World Famous 3 Lions Tattoo Studio."

One of my AZB Forum friends got this tattoo the first few days into the singles event (click to enlarge to see the fine details): 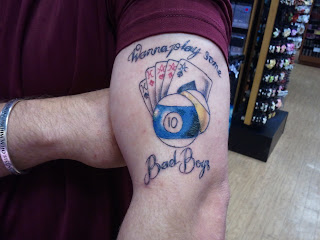 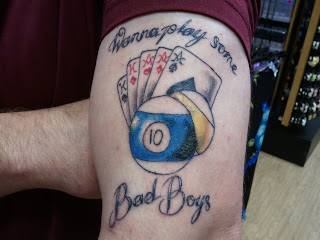 His team is from Odessa, Texas and they are called Bad Boys.  I love the original design and how it incorporates pool and cards.

Then when the team event started, about 5 days later, my Vegas roommie's friend from Houston, Texas (Juan) decided to get his FIRST tattoo!  He inked this awesome Phoenix! 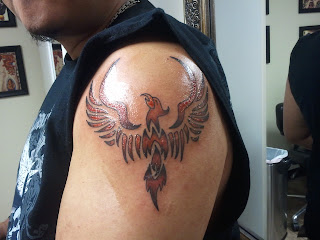 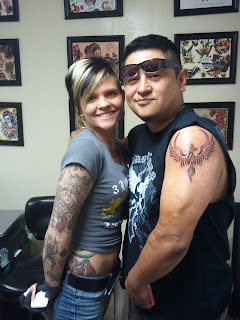 And here he is with his tattoo artist (ain't she a cutey?!).

Juan and I both agreed what was cool about this design is he can add more future tats around it pretty easily because of the shape.

And finally, I took video footage of Juan getting this tattoo  (I also took some footage of the pool area before heading into the tattoo parlor).  Enjoy!