This year, CSI had a new event in Vegas, and it was a huge hit imo!

They had two tables set up to run a 14.1 High Run Challenge that was held throughout the BCAPL Nationals.  Played on two 9’ Diamond tables, each player who wanted to try out in the Challenge paid only $20 and had 4 chances with ball in hand and choice of break ball location. Each player shot until they missed or fouled and their final score was cumulative of their 4 runs (not their highest run).

So for example, if I ran 16 balls in my first inning and then missed, I still had 3 more chances and the total score was cumulative.  It was pretty dang cool!

Monies were given in multiple divisions: single high run (of course) and the top four of each of these categories got paid:  female amateur, pro (male and female), amateur male, and senior.  I hear thanks are to be given to Charlie Eames and Steve Kurtz for this terrific idea and support!

Here is the first Video Tour I did of the 14,1 Challenge Area:

I checked out the area several times every day and would quickly say hi to Andy who ran the event and kept score, and also to John Schmidt and Bill Marop who hung around the 14.1 pit a lot.  John had the first high, high run of like 121 or so and it held for many, many days til Danny Harriman took a turn at the table and ruined it.

Several people asked me when I would try it, as the high run for the women was around 32 in the first few days.  I finally decided to play it almost a week after it started.  I asked John Schmidt to show me the best break out shot and he practiced it with me for a few tries.

The day I choose to play, was the same day/time Mika decided to play.  Not a smart move, but I didn't know he was to play that same day.

I felt pretty comfortable after my first try and had 19 or something points in 4 tries, lol.  But I was in the top 4 for a few days against the other chickies who had tried it.

I didn't fair well the second time I took on the challenge (I tried it again right after the first time).  I was more nervous than I realized.  Even though everyone was watching Mika, there were a lot of eyes watching and it made my heart race.  Talk about pressure - I felt it full force playing in front of everyone.  Even though I enjoyed it, thoughts run through your mind a lot in front of a crowd.  lol.

The first try I hit many tough shots and was proud of myself how well I was shooting on a 9foot table (since I had been playing on a bar table solidly for the past week).  By the second try, even though it was right after the first, I was too nervous for some reason and didn't accumulate more than 15 total points, lol.

I should have tried it again, but ran out of time playing teams and trying to rest between the team matches.  By the end of the challenge, I was no longer in the top 4, and shouldn't be with only 19 total cumulative points anyway, lol. 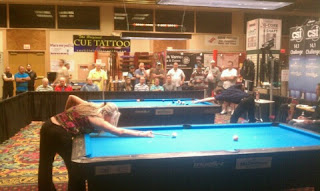 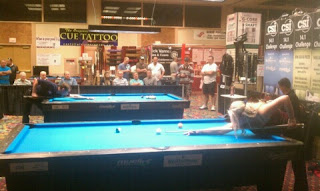 In the end, the top 8 pros were invited back to play a single elimination tourney the final day to see who would get the top cash.  Each of the top 8 were already guaranteed $100, but who would get the larger prizes for first through fourth finishes?

Here is video of the final day:

I really enjoyed this event for several reasons:

(1) it introduced the game to a larger audience
(2) it was cool to see the pros playing right in front of us without having to pay some fee
(3) it was cool to watch the top straight pool players in person play this beautiful game
(4) it was cool it was open to anyone for only $20 a stab
(5) it was fun to see newbies assume it was easy only to find out just how tough the game is when they gave the challenge a shot, lol.

I was Really, Really hoping they would have this again next year, and Mark Griffin says YES!

BTW, here are the final stats: