I almost gambled one time back around 1997 but I was warned me if I played the guy, I would have to play him the next day when he wasn't drunk. Oooh, I hadn't thought of that at all! Good point.  That night the guy was super drunk and that's why I knew I could beat him and why I wanted to play him (lol).  It hadn't dawned on me he would want to try and get his money back when he was sober (and there's no way I would play the guy sober, lol).

The next time I gambled was about ten years later. I played a guy for several hours and we broke even. I had just got divorced and decided to do something frisky and out of the norm for me. Flash forward 4 years, and after watching my current boyfriend gamble for the last 8 months, I finally found myself in a gambling match!

He had been telling me he thought I should gamble to help my pool game and mental toughness, but the opportunity never really came up. But this one night we had the chance to play scotch doubles.  :)

I asked one of the opponents and he told me we were now racing to 7.

How come I wasn't asked?  I'm part of this gambling match. I guess they thought I would be okay with it?  Come to find out, we also doubled the bet. Huh?  I'm now playing for $100 a man!  Does anyone at this point realize I've NEVER played for this amount of money before?   Hello??!

I promise you I don't really think I let the "amount" get to me, but I fully admit that I didn't play the same as when we first started playing per game, instead of the set. I am not sure where the turning point was, but at some point (maybe when I got outta line when we should have won?) we just didn't play as well anymore as when we won the first $50.  We lost the next two sets.   We each owed $75, but since my b/f was already owed $400 from another night, we didn't exchange cash and I wasn't out any money.

The next weekend, my b/f is gambling again and I decide I want to play someone, too. I already had my feet wet a little, and felt bold I guess, lol.  We knew we could support each other because we would be playing only a table apart, so we were okay gambling at the same time. 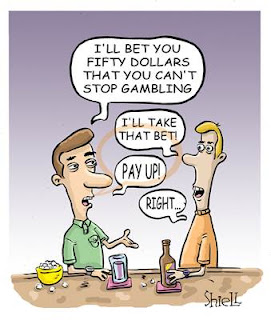 I asked one of the guys who was killing time if he wanted to race to 7 for $50. He finally agreed.  And I found myself under huge pressure!

My adrenaline was racing, my heart rate was fast, I could feel some eyes on our match, and I was making mistakes.

My b/f tried to calm me down with encouraging words, but instead I was freaking out! I would joke with nervousness to my opponent when I would make a stupid mistake, but my opponent (who is normally laughing and joking) was barely talking to me.

I recognized right away that because he gambled more than I, he was focused; while I was nervous inside.

I won the first set hill hill.  Even tho I was up 5-2 and he got on the hill first, I somehow managed the win.

We played again and I told my b/f my opponent was upset and that I was affected by it because I'm a girl (don't laugh!). I don't yet have the killer instinct, still, and so instead of using his frustrations to my advantage, I actually felt bad that I hurt his ego and that he was upset.  My b/f tried to convince me to STOP letting it bother me. But I am the type of person who feels bad for people when they are upset.  I am the type of person who will pick up a hurt bird and bring them inside, or try to help strangers when they need a jump start.  My empathy radar is off the charts!  So, these situations are tough for me.

But I admit it helped when my b/f told me not to take it personal.

I then just tried very hard to only focus on three balls ahead. " Don't think of anything else but that," I tried to tell myself.  I didn't want any superfluous thoughts to enter my mind and for me that's the best way - focus on my pre-shot routine and 3 balls ahead only.

I hope to gamble again, but I am FULLY aware that I wont win every time, I may have to play longer than I want to (because you aren't suppose to quit winner) and I know that it's not going to be easy.

You may be thinking since it's so difficult for me to handle "hurting" other people that I shouldn't gamble, but I need to learn to separate those emotions during competition.. and I (obviously) need further practice.

Still, I'm excited that the experiences of sharpening my mental toughness and focusing under different types of pressure will help me for when I play in my big tournaments!  :)
Posted by Melinda at 12:56 PM

Email ThisBlogThis!Share to TwitterShare to FacebookShare to Pinterest
Labels: Gambling, Personally Me