In June, I attended the 4th OB Cues Ladies Tour Stop, which was held in Dallas, about an hour from my house luckily. :) Love the close tourneys!

I practiced very well on the Sunday and the Tuesday before. However, I could feel I was anxious about the tournament. I wasn't "numb" like I like to be. "Numb" is my description of how clear my mind can get and my body feels ready for competing - this feeling allows me to play pool against the best of them.

I didn't feel good mentally going into the tournament for some reason - and these are some of my worst fears - when I can't turn off the anxious feeling and can't turn ON the numb feeling. Even though I knew I was playing well, I could feel a sense of uneasiness about how I would play in the tourney. It's very difficult to describe.

Overall I had a great weekend spending time with a lot of my friends, but my play was disappointing. I got frustrated, played bad, got upset a few times, etc. I would come with some great shots, but did not get out a lot. :(

I lost my first match hill hill and I feel I should have won the match. I was up 5-2 or 5-3 and the fast table admittedly hurt my thin cuts and I scratched a lot at crucial points. Then I have to come from behind to win my next match and barely win. I was on the stream table and enjoyed that part, but I almost saw before my eyes myself go out-in-two when I was down 5-3. Eeeek! 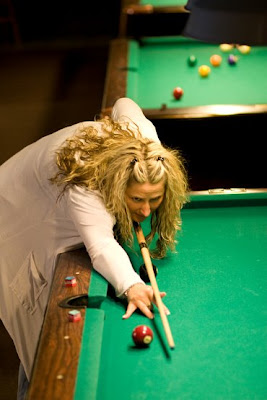 Me on Saturday
My next match is when I encounter Pam, but I also encounter a tough opponent who wanted to win badly and she outplayed me as I faltered as my shotmaking was not up to par this day.

After the match, I am pretty upset. It ends on a sour note as I think a foul was committed but no ref was there. I was down 6-4 anyway but still, after playing bad, dealing with Pam, losing, etc., it just made the whole loss that much tougher. A few very nice friends who I hadn't seen in a long time tried to talk to me after the match about my Mom and how I was doing and it was SO tough to be in a decent conversation because I hadn't cooled down yet. I needed to step outside and literally cool off in the hot sun, lol, but I didn't want to be rude. So, I calmly explained what was going on and admitted, "if I had played better I wouldn't be this upset." But I kept talking and tried to be calm as I updated them on my little life.

I then sat with my friend Andy and he agreed a shot was in order. I also ordered some salsa and chips and then watched the rest of the matches. Many of my friends had very tough loses this day. So many of us got very upset. It was a very weird day for all of us, really.

Then several of us hung around til the very end because we were waiting on matches and just hanging out. That led to all of a sudden Amanda, and Jennifer and I doing Charlie's Angel's poses for some odd reason! LMAO! 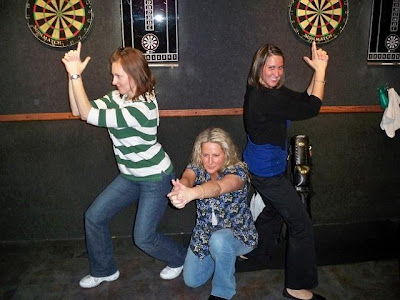 Jennifer, me, and Amanda - Charlie's Angel's Pose!
We had so much fun, Amanda was literally crying from laughter! It was a very cool, fun night that ended up with the always-necessary Whataburger ending. :) 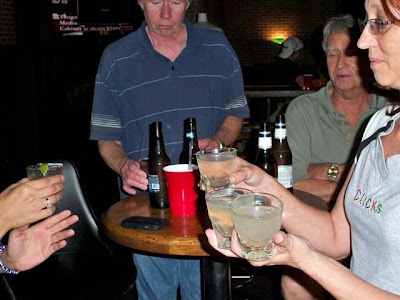 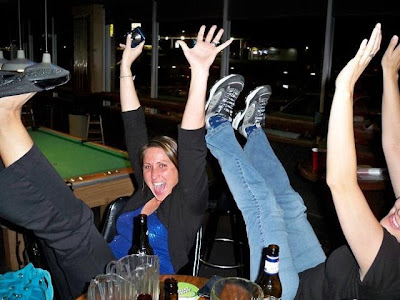 Amanda and Corina, having fun!
Rebecca stayed with me for the weekend to help keep the cost down from getting a hotel, so it was nice to have a road partner for the almost-hour-long drive. But still, the close tourney was awesome! We listened to a great motivational CD on the way about being offended and it was cool to listen to it before the tourney. 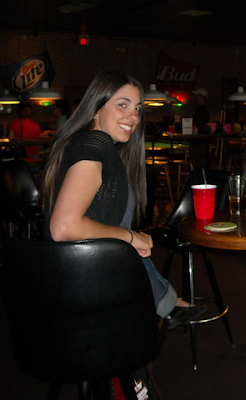 I went back on Sunday for one reason only - because it was Ashley's last day in Texas. :( She was moving to TN after this tourney - literally, after she lost her match she was driving to TN. Amanda and I were playing in the second chance tournament against each other when Ashley had to leave. She came over and we all cried for about ten minutes. Monica then made an announcement about her leaving and she couldn't get through her announcement, had to pause, b/c she was crying, which made Amanda and I cry again! TN is far, but we will still keep in touch!! I'm gonna miss you, Girl! 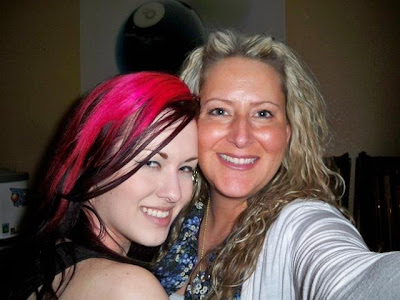 Ashely and I
Tourney Description: Absent
Posted by Melinda at 6:23 PM