Watching players compete intensely on the Omega Tour for the last 4 years, the most important thing I have witnessed is how exhausted the players get towards the end of the tournament.

At that point, it truly is about who is less exhausted.

Here is the situation on the Omega Tour:

On Saturday, the day is chalk full of matches and waiting around for matches.  You can be there for 8 hours and play only 2-3 matches if you stay on the winner's side.  If you get on the one-loss side, you get to stay even longer on Saturday and play even more matches - easily 12 hours some times.

That is exhausting - either playing a lot or waiting, both are tasking both physically and mentally.

If you are on the one-loss side, there are no breaks.  You play back to back to back.  If you make it to the finals, you have just played pretty much non-stop for 12 hours (a few breaks of 10 minutes between matches, but nothing more).

One stop this past season a player told me after he lost the hosteat match, "Man, I am exhausted."

I shared, "You know, at this point every single player is exhausted.   You've all been playing all day. What I witnessed and learned is the player who is the least exhausted does best."

He looked at me, taking in my words and agreeing.

Then I shared even more, "what I have seen is drinking water wakes a player up a little bit and gives them energy."

He ran immediately to get water.  And he won the tournament, too.  I'm not saying I helped him win, but I AM saying that the refreshing feel of water in his system helped him feel better and less exhausted with a clearer mind.  His opponent did not hydrate himself and was just as exhausted as he had been in the last few matches.  So, the player who was the least exhausted won.

We have all heard the benefits of water and hydration.

And as most people know, hydration is key for thinking clear and being able to compete well.  The important thing of course is recognizing you are exhausted and then remembering water can help invigorate you and your senses. 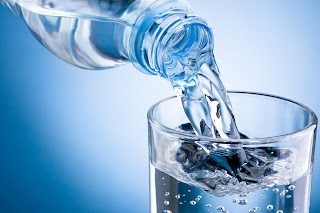 So, I guess beer is out? But, seriously. I'm always astonished when I see players start to drink alcohol early on Saturday. Seasoned players usually hold off until the evening -- if they're still in the tournament. Less-seasoned players who give into "temptation" seem to relax a little too much and start making mistakes. In the end, it's all about pacing oneself. These people are true athletes and their training includes long days and nights. The smart ones know that hydration is necessary to operate at peak efficiency.

I remember when I was in a trainer's course for hockey being told that by the time we are thirsty our body is 25% dehydrated but performance can be affected at as low as 10% dehydration. So having water is a good suggestion, keeping it on hand of course jogs the memory about it.

And of course alcohol and soda/pop are diuretics causing us to urinate more and becoming more dehydrated as well.

Last tournament I was at i remembered that with pop and stuck with water only after having one pop early in the day.