Learning by Watching Others

One of the coolest things I saw on a Sunday morning in October during an Omega tournament was this:

A player who is up and coming and ADORES the game, was sitting front-side of the row to watch the matches that Sunday morning.

Normally the people in the crowd on Sundays are significant others, close friends, fans of the game, or people who happen to stumble upon the tournament that day.

Why was this cool about this particular guy?

Because this player is working hard on his game.  He's taking lessons, does drills, plays in all sorts of tough events to get better.  AND now watching matches on Sunday of an Omega will also help his game.

I had never seen him there before on a Sunday.  He has never come in on a Sunday to simply stay the day and absorb all the learning.  I was tickled to see him add this to his learning plan.  Not many players are aware how valuable and effective watching great matches can be.  And if they do know this already, many don't go out of their way to do something about it like this player did.

The elite players of any tour are playing on Sundays.  If you want to improve your game and learn from the best - that's when to come watch.  Sundays the best players are fighting, competing, battling and we all get to watch their mastery.  You will see more hill-hill matches on Sunday than Saturday.  You will see emotions and mental toughness, but you will also see GREAT runt-outs and CLEVER safeties.  These guys want to WIN.  And they will give everything they have to do so.

So, the lucky ones (like me who have to be there on Sundays) and fans who come watch on Sundays get a real treat of adding ammunition to their arsenal of tools.  Watching run-outs and safeties all day long from great players automatically helps our game because we are watching and absorbing and learning so much from these players.

I seriously feel that my game was helped A LOT after I started running the Omega Tour.  In 2014 I had my best pool year as far as titles won (State and National) and it happened to be the second year I ran the Omega Tour.  Watching all these players stay down on their shots, smooth stroke, seeing awesome safeties and great patterns of runs helped my already good game become great.

And I know that that player I saw visit that Sunday morning and watch matches for hours and hours will also improve his game, too. 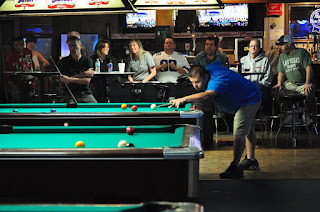 Email ThisBlogThis!Share to TwitterShare to FacebookShare to Pinterest
Labels: Learning from Others, Tips, Watching

Here's hoping billiards makes a comeback on TV, because trying to watch a tournament in a bar that has no provisions for "gallery" viewing causes nothing but problems for everyone. I know. As a non-player fan who attends the Omega Tournaments to watch fabulous pool, I've even been accused of purposely "sharking" a player by the way I was sitting and watching. It was a dumb accusation, because I had nothing to either gain or lose. But I was horrified that someone would think that and actually say it to someone else (I had to hear it from another pool player). Don't think I'm just a dumb face in the audience, either. I love to play pool. But I also love to watch excellent play. Thank God for YouTube and all the wonderful recorded games you can view there.

As I've shared with you before, this isn't an Omega rule - all big tours don't allow players in the playing area. Even this last weekend, the OB Ladies Tour announced that non-players were not allowed in the playing area. While some of the spectators didn't hear this, so throughout the day they were asked to move. I am sorry someone thought you were sharking -it was more that they were distracted.

Yes, we have discussed the rules concerning non-players in the playing area. I'm not disputing that nor do I want to resurrect the non-issue. All I'm saying is it's too bad that accommodations are so lacking for "watchers." I think we can all agree that the tournament and the players are MOST important. It's often difficult for people to know where to stand. And bar players, on the other hand, are adept at tuning out crown sounds and movement (It's A Bar!) Your blog encourages watchers. I would discourage them if the venue has extremely limited viewing opportunities (as many of these bars do). You can't have it both ways.

Good points. I wish we had pool rooms with TONS of tables and lots of spectator area. But we do not yet. Sundays are good times to watch tournaments - less players and less people, therefore more room to watch on that day.