It wasn't the most successful week of pool for me, but what I'm most proud of most is my singles performance.

I am listed as an Advanced player with ACS, so at the ACS Texas State singles event, I go to 6, and the open players go to 4.

The last few years I've had to give that spot, I have not come anywhere NEAR placing well or even remotely in the money, lol.  It's extremely difficult, imo, to give a two spot game in 8-ball.  I'm not even listed as a Master, but still have to give the same handicap as a Master player (2 games).

So, I wasn't expecting much, lol.

I won my first match against a new player and she was the sweetest thing.  She was SO excited she got two games and I complimented her a lot as she was so giddy about it.

I then play a friend of mine who plays well.  I knew it would be tough.  I was up 3-2, but I missed a tricky 8-ball.  And that's pretty much all it took.  She ran the next rack and defeated me 4-3.  I still had 3 more games to win to win the match, but she only needed two and after that miss, it was too crucial and she won.

I felt like I was playing well and she even said something to me about it.  She told me she noticed how well I'm playing and how much I have improved.  She said I am moving the cueball really well and getting great shape.  It REALLY meant a lot that she said that and even noticed, as I felt like I had but not many people can see such improvements if they haven't really played me in the last several years like she has.  It was very sweet for her to even say what she saw. 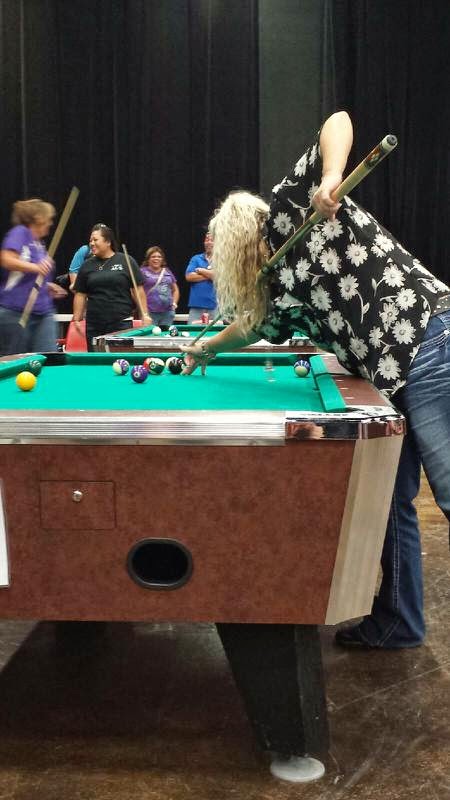 I was done for the day (singles started at 7pm).

I woke up the next morning with a sore throat and I therefore was starting to get a cold.

And, I still had to give two games on the one-loss side.  That, along with lack of sleep, made for a very short day coming up.  I even told my friends Teri and Michelle to get ready to go to Olive Garden for lunch because I didn't expect to win my 10am match.  Too much weight and too much against me, lol (sick and no sleep).

I felt fairly food though as I walked in.  Teri got me some orange juice and I had my water, also.  I hit a few balls.... and I could tell.  Can you tell sometimes?  Yep, I could tell I was going to play well.

As I reflect back, I can see that I had NO EXPECTATIONS at all and that's prolly why my expected short day turned into a 10-hour day!

I won that match. 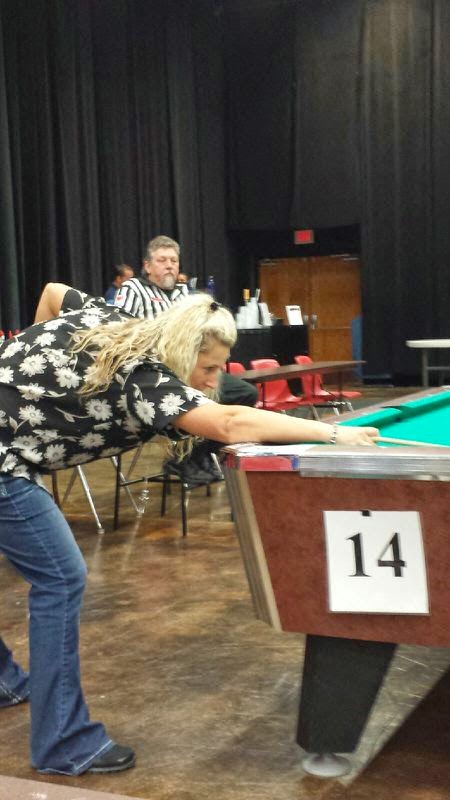 Played a teammate next and while she played excellent safes, I prevailed because I was playing so well.

Then I played my good friend Courtney.  I knew it would be the toughest match of the day because it was more about status and emotions than pool, really.  After playing my little heart out and staying in the match, I won hill-hill!  I couldn't believe it really.  A few dif shots and the match could have gone the other way.

I then won another match.

OMGosh I was playing SO SO well. 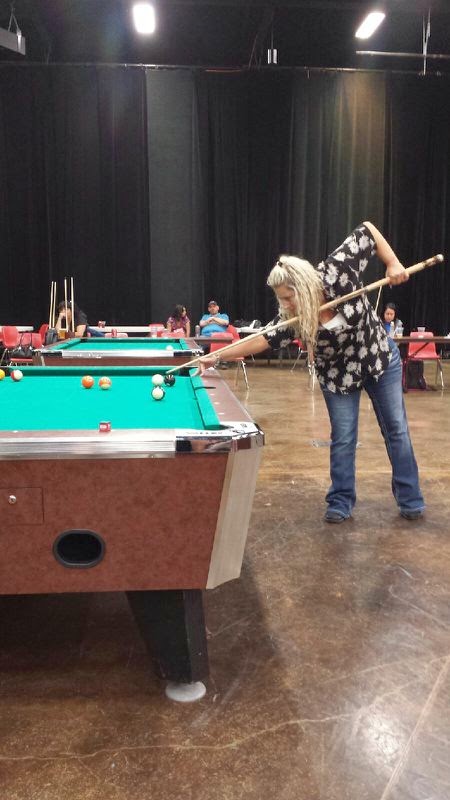 I then find myself playing for 4th place.

I was still playing well, but my opponent got out if I made a mistake and also ran out one game, so since she only had to go to 4, she defeated me.  She would end up getting 2nd in the tourney and she played really well.  I was impressed.

I figured out I had played for TEN hours, 7 matches.  Wow. And I didn't get to Olive Garden until 11pm that night, lol!  Teri and Michelle, and Alixx and her husband Nathan all went together.  They also watched my matches ALL day long.  They were for sure amazing support and I appreciated them SO much for hanging in there and watching every single match!

Even at one point, Michelle, Teri and Alixx went to play in the Second Chance tourney and they all left.  But Nathan stayed back to finish watching my hill-hill match.  It was really sweet.  Alixx would tell me later, well, someone had to stay for us all!

I can't explain why I played so well this day except I had no expectations.  But to be able to play THAT well for THAT long for ALL those matches really, truly gave me some insight into my own game.  That I AM capable of playing many matches in a row well.

I really am playing some top notch eight ball right now.  Still not sure how or why with NO practice and only one league a week I play in now.

I have a 9-ball tourney this weekend and already the expectations are making me nervous and I'm not even on the road yet to the event!  Not good for me.... I need to feel numb and not care!

Thank you to everyone who gave my kind words of support during and after my ACS State singles play.  REALLY meant a lot!

I admit it felt SO good to play well!