Not All Videos Are the Same

The other night I went to get my hair highlighted with my fav stylist and as expected, because I don't like to sit around and do nothing (otherwise, I feel like I'm wasting time) I brought something to do for the next two hours from the salon chair.

Normally I take a pool-related book or read one of their magazines, but this time since I have three straight pool matches scheduled for this upcoming weekend, I decided to watch some straight pool!

I grabbed my light blue laptop my, my headphones, and three DVDs from my stash and ran out the door (as usual, I was running late). 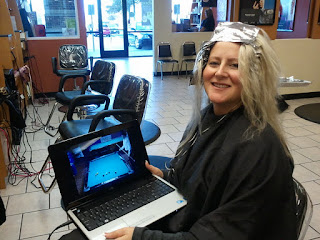 Getting my hair highlighted with my laptop and pool!
I put in a DVD I don't think I had watched before and because both Schmidt and Hohmann were in it, I was a little bit excited on what I was about to learn!

About 20-30 mins later, I couldn't stand it anymore.  I wasn't learning a thing!  I can't even give the excuse that the commentators were BSing.  They just weren't talking about options, choices, the best shots, etc.  They were more giving play by plays, instead of helpful advice.

So, I grabbed another DVD and hoped this one would be better.  It was Allen Hopkins versus Jim Rempe and I hadn't seen this one either.  And I was so excited when the commentator started talking - one of my favs!  Grady Matthews.  I just knew I'd learn from this video!

And sure enough, Grady and his cohort didn't let me down!  I think his side kick was named Jack (sorry, I forget his last name).

I learned much much more from this DVD than the other bland one that had no advice or instruction at all.

It's amazing to me the difference between these two DVDs.  And the key is obviously the commentators.  Not just if they are knowledgeable, but what they say as the match goes on.  Why certain balls are made instead of another one; what English is used for the break shot; which is the key ball; why to leave certain shots; how to manufacture a breakout ball.

Obviously, because I want to learn more about straight pool, the match with the "instructional" commentating was what I aimed for.  If I wasn't trying to improve, I suppose the other match would have been fine to watch to see who would win.

But I am of the opinion that watching pool videos is about learning.  I don't watch pool DVDs to just see the final score.  It's not a movie to me - it's a learning experience!
Posted by Melinda at 11:46 AM

Commentators make or break a video. The worst are the people reading and reacting to questions/comments posted on twitter or a chat room during the video feed.

Speaking of good videos, I've impressed people with my one-pocket break thanks to your video on poolstudents.net. Any ETA on chapter 2? When I play one-pocket, I break great but lose horribly.

I agree about your comments about the videos. I had forgot about the answers to chats and such! :(

I am glad that video helped! Chapter 2 has been done for many months, but I'm at the mercy of an editor who is extremely busy. He says maybe in a week or two it will be finalized.

Thanks for the comments!