This is my little friend Ezekiel! (Zeke for short): 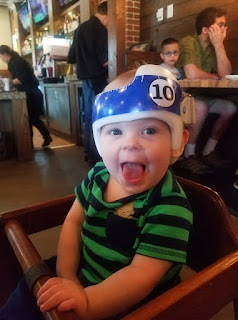 Ezekiel is the beautiful boy of Nicole and Joseph, who was born Jan 10, 2018.

I asked Joseph about Zeke's cool 10-ball helmet.  No, no, he's not getting ready to ride his bike into the sunset with a new girlfriend, haha!

Joseph shared that basically nowadays they recommend babies sleep on their back.  At 3 months, they noticed the back of Zeke's head was really flat.  They moved him from rocker to basinet and from 3 to 6 months, no matter what they did, he would always sleep on his left side.  Joseph shared, "Move him, he would move back. lol"

The result was a flat head on the back and left side, and they also noticed his ears were uneven "by a lot."  Zeke was diagnosed with Plagiocephaly.  It's actually a very common problem, and some fix on their own, some do not.  Nicole and Joseph decided (rather than hoping it would correct itself), and "knowing how mean kids are, we didn't want him getting teased about his head shape," to look into options.

So, they got 3D images and a custom DOC band made.

For those like me who don't have kids nor around kids:


"The DOC Band is the only custom cranial helmet with nearly 35 years of documented outcomes. It’s been used to safely and successfully treat more than 175,000 babies with moderate to severe plagiocephaly.  Each DOC Band is custom made using our state-of-the-art technology and one-of-a-kind manufacturing process to ensure it delivers the best possible outcome for your baby."


He will wear his helmet 4 to 6 months, 23 hours a day.  And Zeke will have head band adjustments done every 2 weeks to evaluate his progress. 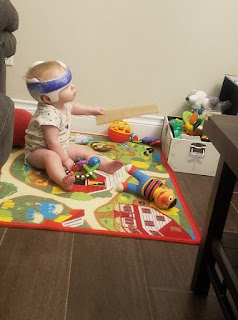 Then one day they were eating out for Nicole's birthday dinner and having an awesome conversation about billiards with their server.  Turned out their server (Brandon) also loves pool and Joseph shared information about the tournament scene in and around Houston during their dinner.  Joseph used to play on the Omega Tour here in Dallas / Fort Worth and he's still on the pool scene down in Houston and many other places when he travels.

Joseph and Brandon would soon become friends on Facebook and that's when Brandon also started to ask questions about the DOC band.  Then he asked if he could decorate it, as he is an artist.  Because it has to be worn 23 hours a day, doing awesome detailed art work was not an option, but Nicole and Joseph had already agreed what they wanted.  Because he is a pooloholic and Zeke was born on Jan 10th, "Logically a 10-ball was the design we wanted."

Turns out Brandon's family runs a sign and wrap company, so he hooked them up!  They got two decals created based off dimensions, and when the decals were ready, Brandon went over to do the install.

"With a blow dryer, a lot of patience, and business cards, we installed it together which was a really cool experience."

And they still have the other decal if this one gets too messed up.

"Brandon offered to do it for us, no charge, just looking forward to having a friend he can shoot pool with.  I believe everything happens for a reason, and divine meetings like this take place all the time." 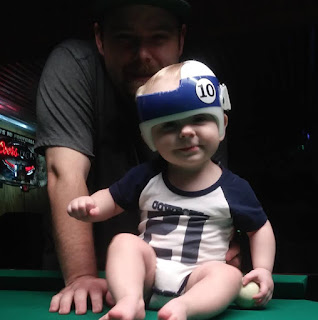 Rather than spend hundreds of dollars to get it done at a place elsewhere, they had a chance meeting, talked about billiards, became friends, which set in motion for how Ezekiel got his 10 ball design.  "And Nicole and I gained a friend that likes billiards."

You can see in the photo above Zeke already likes billiards!  And, he watches tournaments streamed all the time with Dad, too.

Here is Zeke and his parents: 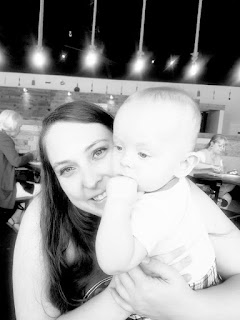 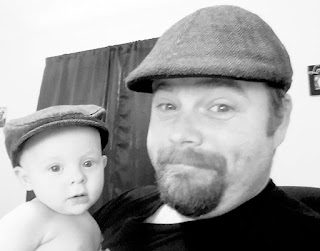 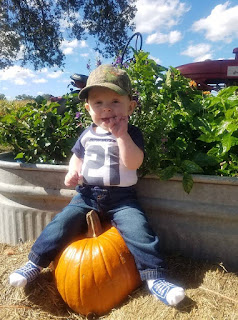 Thank you for sharing your story, Zeke, Nicole, Joseph, and Brandon!

Email ThisBlogThis!Share to TwitterShare to FacebookShare to Pinterest
Labels: Different and/or Interesting, Family, Friends, Sharing about Others