One of my friends played in her OB Cues Ladies Tour stop in early November.  Here Brittany and I are taking the always-required selfie: 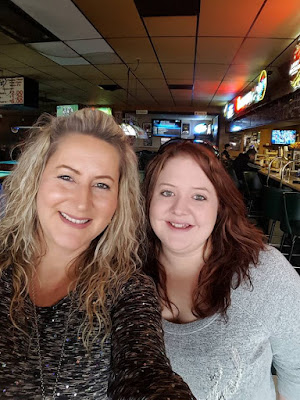 After winning her first match, she came up to me asked me how her next opponent played.

"Terry something.  Terry P, I think," she shares.

I replied, "she has good days and bad days like the rest of us."

Terry is a BEAST!  She won one of the OB Cues Ladies Tour stops this year!  She is one of the top players, but I was not about to make Brittany nervous in her first tourney with the ladies.  I didn't want to shark her at all, I just wanted her to play pool!

I think we should all be careful how we describe someones' abilities to others.

If we tell someone, "oh they are easy, you can beat them" - That's actually pressure!  What if they start to lose, then they might be thinking "damn, I'm suppose to win," which adds more pressure and crazy thoughts in our head.

If you say, "oh, that player plays GOOD," then you have already defeated the player in their mind and they haven't even stepped up to the table yet!

I have defeated many players in big tourneys I had no idea who they were.  Once I knew, I was like oh shit!  I actually would have been nervous if I had known I was playing a top regional player.

I've seen so many players defeat a top player because they had no idea who they were playing.

So, help your friends out and don't give them details of their opponents.  Just let them PLAY POOL.

(btw, Brittany defeated Terry and then afterwards I told her who she was.  She was like, "yea, she played GOOD.")