Asked to Play One Game

The last night of my Thursday night women's league season about 4 weeks ago, while we were playing in this small bar I hadn't played in before, a group of bikers came in towards the end of our match.

They knew the bartenders and were obviously regulars.  Two guys, two girls, in leather, owning the place, really, you could tell, as they walked in.

They sat at the bar and watched us play.  I think they wanted to play some pool themselves, and were politely waiting on the sidelines for us to finish.

My last game, I had a very long tough 8 ball shot, and I wasn't sure if I could get by a ball that was located in the center of the table.  The pocket for the 8 ball was of course at the end of the pool table closest to the bar, yes, right towards the bikers.  So, if I was to shoot the 8 ball, I'd be shooting right at them. 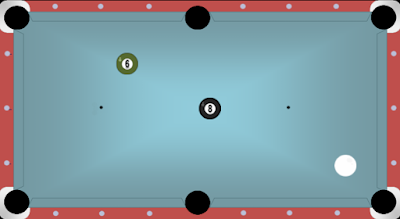 But I wasn't sure I had a clean path.  I leaned down to to check out if I could really squeeze by the 6 ball, and as I did that, two of the bikers leaned down from their stools to take a look also - to see for themselves if it went by.

I stood up and kinda laughed.

You have to imagine - I get down to see if the shot goes, and they are doing the same thing from the other end of the table, at the same time.  Lol.  So, basically, we are kinda looking at each other, lol, except I'm the one who has to shoot the game-winning ball.

It was a bit of a distraction, I admit, but I got down and nailed the shot.  I joked with them afterwards, "could you tell it went?"  They all agreed it would go by the other ball just fine.  lol.  I honestly didn't think it could sneak by (luckily it did, tho).

After all our games are done, we start to pack up and I can't get my cue unscrewed.  I keep trying and trying and while I'm struggling, one of the biker dudes comes up to me and says, "since you can't get the cue unscrewed, would you like to play me a game of 8 ball?  I heard you were a master player."

I normally never play strangers that ask me to play.  Like never, not even one game.  But I was in a decent mood and he was being super kind and genuinely interested.

I replied, "I'm not a master, just advanced, but sure I'll play one game."  He told me his name and then introduced me to his girlfriend and their two friends.

Here's where it gets interesting.

I told him to break and he motioned for me to.  I told him I already put up my break cue and then he holds out his house-cue and offers it as a gift to break.  I obliged.

I break and make a ball, then start to run out while he and his friends are watching me.  Then on my last ball - a tough shot - I miss it.

So, it's his turn at the table, but he comes up to me first and says, "I don't want you to take any offense to this but I play one-handed.  It has nothing to do with you and I'm not trying to be a smart-ass, I've just always played this way."

You have to understand that he didn't have to say that to me.  He could have just started to shoot one-handed, as he obviously does every day, and not explain himself to me.  It was really cool he was very cognizant that it would be best to explain this before he plays.  Why?  Because otherwise he would have come off as a cocky, arrogant guy playing one-handed trying to be an asshole.

And I was impressed with that.

So, he did shoot one handed.  And in the other hand he held his beer bottle.  The whole time.  I'm not shitting you!  This is how he played!

And he played GOOD.

OMG, he ran ball after ball - and was making everything!   I was impressed now with his game, and I thought he was going to beat me for sure.  He had one ball left and it was a tough cut (even for someone using both hands lol) and he missed.

I got back to the table, made my tough shot and then the 8 ball and won.

He shook my hand and said, "I think even my girl over there now thinks you play better than me" as he tilts his beer bottle towards the bar and she smiles at me.