I don't know how much this is being pursued, but thought I would write down my thoughts anyway, since I was asked my opinion.

The Texas Open is a 3-day tourney.  From Saturday morning through Labor Day, every year.  They limit the Open to 128 players and they limit the women to 48 players.

The atmosphere of the Texas Open can't even really be explained in words!  You have to experience it yourself, in person, to get the full effect. 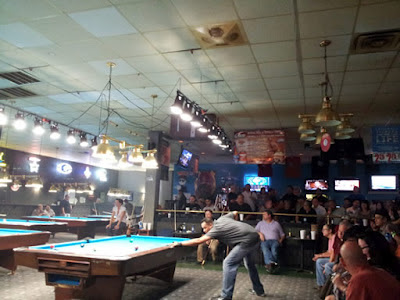 The place is pretty much full, so it gets standing-room-only, even WITH two sets of huge bleachers that are brought in.

To watch the pros plays against Texas' top players and amateurs is a joy to witness.  The crowd loves the action and the match ups and the great competition and they show their support with lots of claps and cheers (or moans).

To go to this tourney every year with my boyfriend is a very special time -we BOTH get to play in separate events and we also each get to intertwine among the rest of the die hard pool fans all weekend.  He might get into a game or he will spend hours on the billiard table.  We socialize and get to visit with a lot of people we only see once a year - AT this tournament.  It's truly an amazing weekend of great fun, awesome competition, and making memories.

When I was asked this past tourney on Labor Weekend what I thought about splitting up the men's and women's weekends, I immediately thought it wasn't a good idea.

This is only an IDEA right now!  They are only contemplating possibly holding the women's event the weekend before.

If they do this, the women's field could be opened up to more than 48 women the weekend before, and we wouldn't be "fighting" against the men for tables for our matches.  The ladies do tend to get the raw end of the deal - we start our first matches late Saturday night and sometimes our second match can be at 1am!  But, we all know that's how it goes at the Texas Open - they only have about 12 nine-foot tables to play 160 people in three days.  It just comes with the territory.  :)

That would in turn allow up to 48 more players in the Texas Open's Open division over Labor Day weekend.  And, that also means more money added to the payouts and fees (I presume) for the Open.

The women's division of the Texas Open hasn't filled up to 48 in the last 15 years, and it hardly gets 32 women.  We usually get around 24 women.

IMHO, the reason we don't have more than 32 women is because the entry fee is $75 (or more if you miss the late fee deadline).  Further, since Pros are allowed, the players are having to pay that high an entry fee much to play against a few pros.

EVEN when the top 32 female WPBA pros were not allowed, that still didn't increase the participation.

So, I'm really thinking it's the entry fee.

Now, I don't mind the high entry fee - mostly because it's only for this one prestigious tourney once a year.  If it was a tour, I couldn't afford it.  But, most weekly or monthly tourneys and also regional tours, the women's fee's are all from $10-$40.

However, I wouldn't be able to play in the Texas Open if they moved the women's event to a separate weekend.  I can't afford two weekends in a row to travel 3 hours and pay for a hotel for two weekends. And one of the weekends being a holiday weekend, the price goes up AND it adds an extra day.  I would rather my b/f and I go to the same tourney in one weekend so we can split the hotel room and other costs.

I simply don't want to drive that far two weekends in a row nor do I want to pay twice for a hotel.

Further, the Texas Open is an EXPERIENCE.  It's the ATMOSPHERE that makes the Texas Open the coveted tourney to attend once a year.  We get to see all of our friends.  If I was to only go the weekend of the women's event, I wouldn't get to see my male counterparts, or watch the male Pros play.

And while I go to the Texas Open to play in the women's event, playing alongside the men make it a much more exciting, fun weekend.  I can play on the OB Cues Ladies Tour for my women-only tourneys.  I don't want to do it for this big tournament.

This proposal is just an idea right now, but these are my thoughts on the subject.  If they do split them, I wish them all the luck in the world.  The Texas Open will always be very prestigious, no matter if they split it or not!  It's a historical event, really.  But, alas, I would have to choose to go the Open over Labor Day weekend due to the reasons I stated above.