Funny, those little trophies that get moved from box to box.

Funny, when you are so excited to win one, even a little one, and people make fun of you.

I remember this huge gesture by Vivian Villarreal one time several years ago. She won the Texas State Open (again) for the millionth time (exaggerating, obviously) and after the win, she gave her trophy to a young fan who watched her win.  She has trophies everywhere I'm sure, so this was a great moment for the fan.

I remember this Valentine's Day Trophy I won for a scotch doubles event.  My boyfriend wouldn't even carry his.  I carried both, proudly! 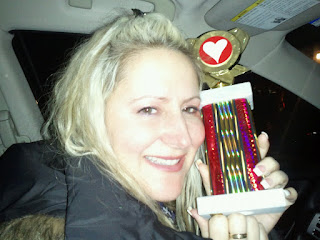 I haven't won many titles in my life, so when I DO happen to win an event with a trophy or a plaque, I am pretty dang excited!  I have expressed numerous times in this blog and to my friends that the title and trophy mean more to me than the prize money.

And I have to believe I'm not the only one.

I might get made fun of by guys, or maybe players that win them all the time, but for me they are few and far between.

Funny then, when the BCAPL Texas State tourney didn't have trophies or plaques the last two years for the players.  The ladies wondered where the trophies were.  We figured we would get them in the mail.  Didn't happen.

Then for BCAPL Nationals, my Women's Team WON the Team event! There were only 4 plaques, so being the Captain, I offered to be the fifth person who would receive their plaque later in the mail. Still haven't received it. Even the other day, the WINNER of the BCAPL Texas State singles women's division had yet to receive her plaque.  Her husband declared, "If they aren't going to send it, at least let me know.  I'd like to order my own plaque for her."

THEN.........something amazing happened.  My boyfriend's Men's Team won the ACS Texas State team event earlier this month.  All of a sudden, my boyfriend isn't making fun of trophies anymore.  There was only one trophy per team, but almost every player ordered their own copy, and one for the pool room owner who they represent. 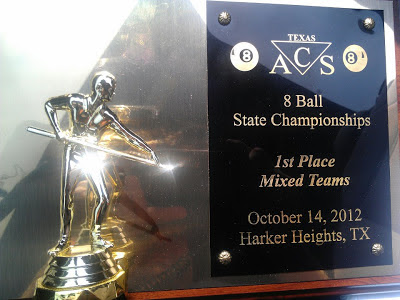 It was pretty damn awesome to see these macho men be so proud of the plague.  Granted, it was a beautiful piece of metal, but to hear them each want one ordered for themselves, was pretty special.

I then came home and emailed the BCAPL Nationals.  They didn't have a record I had ordered my Nationals plaque, so they dropped it in the mail this week!

He was VERY apologetic and thought this was already taken care of.  Then he shared that 2-3 years ago, when they were cleaning up and moving tables out, they found plaques in the trash.  So, since they pay for the trophies with their own money, their new policy was to order plaques after the event if anyone wanted them.  That message wasn't passed down to the players, but some of us know now!  And, we are getting plaques soon.  Yay!

I am so proud of my boyfriend's team that won.  Even the captain has added "State Champ" as his signature for all his texts now.  :)  Pretty cool.

I know the feeling - and IT'S AWESOME.  And soon, they will each have a plaque of their won to prove their awesome win!!  What a great memory piece that will be for them for years and years to come!

See?  Trophies and plaques ARE awesome after all :)

Email ThisBlogThis!Share to TwitterShare to FacebookShare to Pinterest
Labels: Different and/or Interesting, Trophies

Funny you mention that. I was talking to a friend of mine and mentioned that I never got any kind of plaque or trophy when I got 3rd in the TX BCA in '09. That's probably my biggest pool accomplishment yet. :-(

Funny you mention that. I was talking to a friend of mine the other and mentioned that I never got any kind of plaque or trophy when I got 3rd in the TX BCA in '09. That's probably my biggest pool accomplishment yet. :-(

Dalton feels the same way.... he wants the trophy more than anything.. the prize money is great.. but it will be gone and it will be just a memory.. at least with the plaque/trophy you have tangible proof.