I'm on a new league, a women's league, and I have thoroughly enjoyed it.  I don't normally like leagues, but I have enjoyed this one, mostly because of the camaraderie of my fellow teammates and my competitors.  A lot of these women I have seen at state tournaments or once in a while at other events in the area, but I never really hung out with them.  A few, but not many.  I have enjoyed my new friendships with a lot of the women, and I think with my Mom's passing, this has been very important and healthy for me.

I haven't written about it yet, but my team won the league play offs two weekends ago!  I was SO excited!  I had never won a league playoff before.  And I won the case game, too!  It was a tricky out, to boot.  :)

I also only had one loss the entire weekend.  I'm REALLY not sure how that happened, because I was extremely sick on Sunday.  Saturday I fared well, but by Sunday morning, I had had only ten minutes of sleep the entire night before and my heart rate had been up all morning, and would be up for the rest of the day.  I had too many red bulls the night before (more than I ever have) and that combined with some emotional things almost convinced me to go to the ER instead of league playoffs.  As each hour passed, as each non-sleep passed, I just told myself I had to TRY to get to the pool room that was 30 minutes away and TRY to play pool for my teammates.  We were on the winner's side, about to play in the hotseat match at noon; I had to be there.

But I admit I was miserable.  I drank so much water, I had to pee 2-3 times during each match.  I was shaking and barely able to play pool.  I felt horrible.

I told my teammates if I fainted, "to just wake me up, don't call the paramedics."  One joked she would splash water on me, the other told me she would hit me (because I wouldn't remember it, lol).

As I struggled through the day, I forced myself to play pool for my girls.  I couldn't let them down.  And, we ended up winning!  I had never won a league playoff before!  I finally smiled - first time the entire day, after I sank the winning 8ball and we celebrated with high fives and hugs!

The banquet for the league was the following Thursday.  I called my captain and asked her if I had to be there.  I told her I wasn't feeling well still, but I wasn't sure what the banquet entailed, since this was a new league for me.  Would there be pics?  Discussions?  Was I *really* needed.  She said no, and that an official team pic (with our shirts) were taken over the weekend, but there would be a pic with the trophy (since we just won the playoffs) that I would miss.  I told her since I really gave it my all to show up over the weekend when I was sick, I would like to not go.  She said that was fine.  I didn't feel like I was letting anyone down by not going to the banquet, I more cared about showing up to play the weekend before.

On Friday, I see a photo of my teammates on facebook - we were voted best sportsmanship team!  How cool!  There was a pic with all the ladies,  all my teammates with cute little trophies, minus me of course.  I was so harpy for them!  And then I felt bad I didn't go, but I still had hoped they understood. 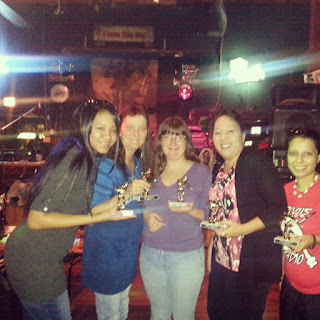 Turns out, besides my team award, I won another award.  The day of the banquet, one of the board members had called me because she heard I may not be going.  She was kind of stammering and I couldn't figure out why. She finally told me I had won an award.

"Okay, I understand.  I thought I'd try tho.  I'll see you this weekend for the Queen of the Hill tourney."

"Most Tables Runs."  She finally fesses up.

I am perplexed and surprised as I tell her.  "Really?  That's weird, I didn't think I played enough to be in the running for anything.  I had no idea I had that many to win this award.  There were several people in front of me I thought." 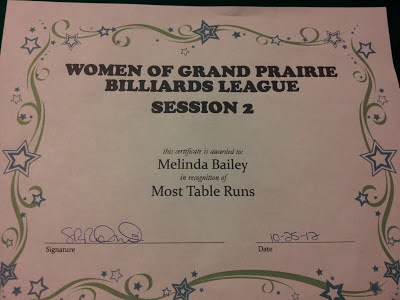