The first stop of my new baby - the Omega Billiards Tour - is complete! 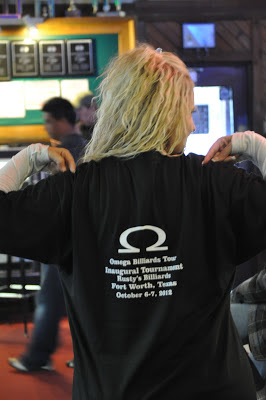 Me, showing off the t-shirts for the first-ever Omega Billiards Tour event!

I fully admit I was very stressed weeks before.  Trying to get everything ready the final week and the day before, I almost pulled out my hair, lol.

Here is a pic of all the items we were taking to the stop: 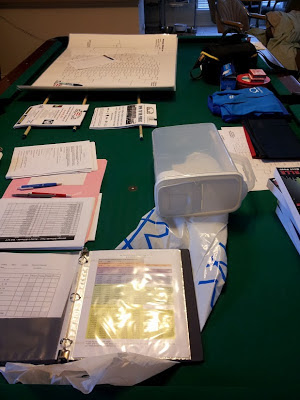 I had a big box to put everything in, had laminated the brackets (and included the tour's logo), and had printed what seemed to be a thousand things, lol:  sign up sheet for second chance tourney, sign up sheet for shirts orders, 40 copies of the calcutta list, the official sign up sheet, a calcutta sheet for the TDs to take notes, signs for Play Your Best Pool, signs for the shirts ($12 for the t-shirts and $20 for the polos - we ran out of ALL the shirts), sheets for the ladies event, flyers for the next stop, flyers for the Omega Billiards Supply store (our main sponsor), etc. 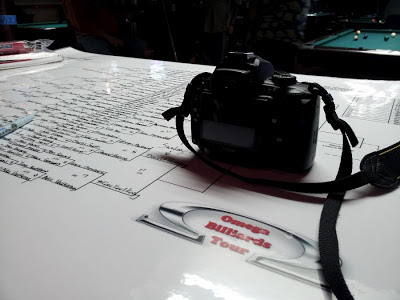 I remembered to go the bank to get lots of change and also the paypal entries (luckily, lol), and also had raffle tickets and a bucket for the break and run part of the tourney.

I was completely surprised how awesome the break contest turned out - we raised enough money that the break contest was $50 A BALL!  Jeremy Jones' ticket was picked and he pocketed one ball before scratching.  That means he won $50.  Further - at the next stop, the break and run will START at $45 a ball!

We are limiting the Omega Billiards Tour to the first 64 paid entries.  TWO WEEKS before the event, we were full!  It was so very exciting! 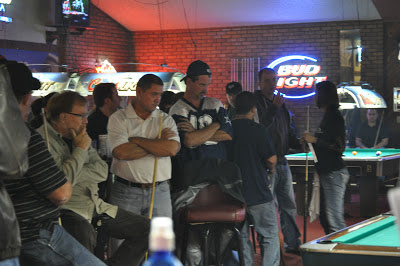 Some of the stress came from people having to back out and us trying to contact the players on the standby list the two weeks before.  That Alternate List had almost 15 people on it and every standby person we contacted (about 8 players) took a spot.

Another stress was: was everything ready?  lol  Did I remember everything?  Well, the one thing I didn't bring was the percentage payouts for the calcutta.  I knew how many places to pay (8 spots with 64 players), but had to look up the percentages when we got to the host room.  Thank goodness for Google!  But, I already had the tourney payouts done for the main event and had the women's percentages ready.  I also had the bye sheet and the bye chips prepared ahead of time.

Here's a good pic of the tourney table with the tickets, shirts, bracket, flyers: 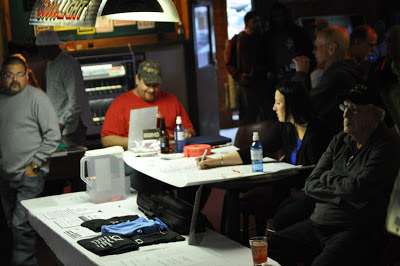 Brian Anderson, myself, and Amanda Lampert were the Tourney Directors and we were busy running the brackets and the tourney the whole weekend.  It was awesome and fantastic! 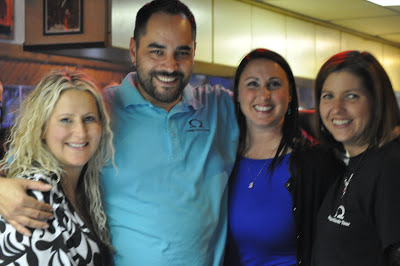 In the end, we took about 300 photos and crowned our first Omega Billiards Tour champ - Coy Lee Nicholson!  He defeated Jeremy Jones in the final.  Jeremy won the first set but Coy Lee held on and won the second set hill-hill to capture the first place prize.  Daniel Herring placed a respectable third! 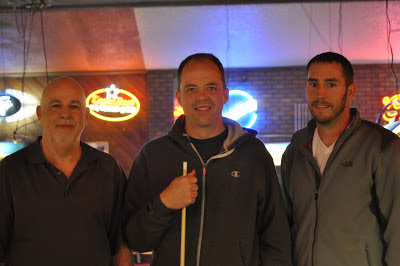 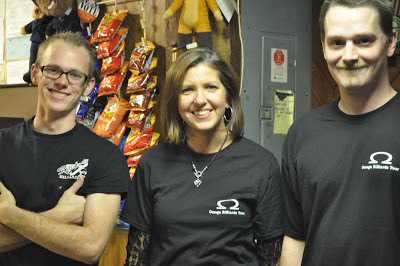 The staff at Rusty's were AWESOME!  They were super busy ALL weekend long but every staff member told me personally they had a lot of fun and can't wait for the next one.  This not only proves the staff does a wonderful job, it shows that the players treated the staff well.  What an honor to be around great pool players! 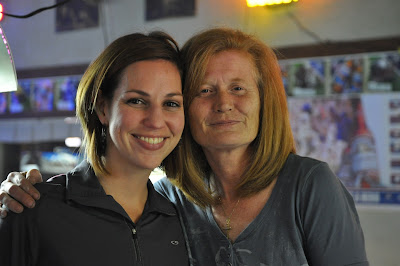 A separate ladies event was held on bar tables and the $100-added tourney drew 12 ladies.  I was really disappointed we didn't have more ladies show up, but we still held the tourney for them.  Susan Raymond won 1st place and $180 while Orietta Strickland placed 2nd and won $140.  I somehow placed 3rd and won $60 (even though I was busy and distracted with the tourney, lol) and Cindy Vansickle captured 4th and $20. 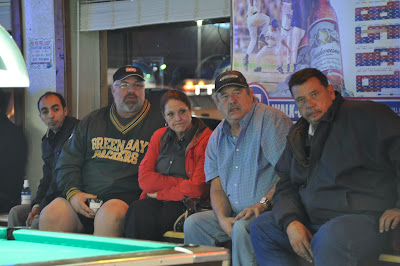 I have to say that without Mike Hoang of Omega Billiards Supply, we would not have started this Tour.  And without Tracie at Rusty's giving us a chance, we wouldn't have our first stop.  Most importantly, without the players and fans, we wouldn't have a full field, an exciting calcutta, and a plethora of awesome matches all weekend long!

Brian Anderson is the co-Tournament Director with me of the Omega Billiards Tour; but Brian and I must state that Amanda Lampert completes this entire, fantastic team.  I asked her to help for the very reason she displayed over the weekend: professionalism, composure, helpful, and a talented TD.  We all three really make a great team and I am honored.

I am so proud to finally have this dream come true - a billiards tour FOR the players in the Dallas / Fort Worth area!  Thank you to all our sponsors and fans and players (and the new ones coming on board every week it seems!).

With ten years of Tournament Director experience, I am very confident in the tour and our goal:  To provide an avenue for the pool players to play the game they love (and to win some money, too).  :)

I also can't begin to express I have purpose again.  While that's personal info, being a caretaker was my goal in life for many years, then after I lost my Mom, it caused me to be lost for a year.  The new Tour has given me renewed energy, confidence, purpose, and I am excited to help Mike Hoang promote the sport of pool!

Here are the complete results and over 200 photos:  http://omegabilliardstour.weebly.com/results.html

What a wonderful accomplishment. I've heard nothing but good comments and players are so excited about having their own, local tournament. Contratulations to you, Melinda, and your team for a job well done.