I thought I'd share a little rant today - that criticism and comments have their place.

I have written before that I do not like to talk about a match that I just lost.... until I'm ready.  I'm too upset to listen, much less listen with an open mind... if I am still hurting or upset from a loss.  When I am ready to talk about it, it's very obvious - I will ask your opinion about the match and what I could have done to win or improve my chances to win.  Until that time, I don't want to talk about, hear what I could have done, what I did wrong, etc.

Well, I am beginning to think it's worse DURING a match.

I don't understand why people think it's okay to tell you you should have done something a different way, IN THE MIDDLE OF A MATCH.

Just like I wrote before in my match from May in Vegas, this guys' negative comment was NOT helpful to me:  http://pooljourney.blogspot.com/2012/06/negative-comments.html

While I recovered from his comments during the match, a more recent one I did not:

I was playing in an 8ball tournament, ahead 3-0, earlier this month.  I had this shot in front of me: 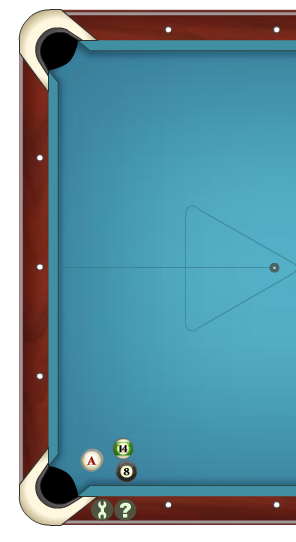 My opponent had tried to play safe, but I could easily see the 14 ball.  My very first thought was - "you can just stop the cueball right there, and land right next to the 8ball.  It will be a great safety!"

However, I ended up missing the 14 ball.  :(  Since I had rolled the cueball up for shape on the 8, it left my opponent with an easy shot on it to win that game:  (Cueball landed at B below (click to enlarge)): 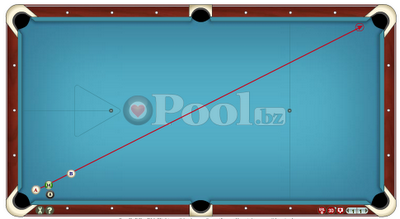 As I sat in my chair, watching my opponent rack, a friend whispers in my ear, "Why didn't you just stop the ball?  If would have been safe."

I turned around and immediately reacted.  I got perturbed, and maybe slightly embarrassed.

What happens next is hard to explain.

It's extremely difficult for me to recover from those little words.

Now, when I stand at the table trying to decide what to do, I'm uncomfortable, unsure, and wondering if what I am doing is correct.

Here's the thing:  As soon as I messed up, I immediately knew what I did wrong.  I've been playing pool for 20 years or more.  I KNOW what I did.  I don't need someone pointing it out to me in the middle of match, because it throws off my confidence.

If I would have turned around and asked, "what could I have done?"  Is one thing.  But to point out the obvious in the middle of battle does NOT help me.  It HURTS me.  It affects me for the rest of the match; and I'd be lucky if I squeaked out a win after that.

And, in this case, I ended up losing.

Even at one point when I missed in the next game or two, I attributed it to that ONE comment.

Now, anyone with a rationale mind will say, "You are crazy, Melinda.  Why let that bother you?"

Well, why tell me in the first place?

I am female and females have a difficult time with acceptance and embarrassment and criticism enough as it is already.

You can tell me all day, "You jumped up.  Stay down.  Don't whack at the ball."  But, judging me in the middle of a match does not bode well for my self esteem, confidence, and it's tough for me to recover from the words.

I don't go around telling players in the middle of their match what they did wrong, or what they should have done.  I leave them alone and let them play pool.  I wish people would stop doing it to me and let me focus on the match I am in.

Pool is difficult enough; I don't need the extra distractions.

There is a time and place.  For everything.

I don't know why THIS particular situation I was not able to recover from, and the other one I was.  I think I had more pressure in this tournament, so it affected me more?  Not sure.

And don't get me wrong, I am open to learn and improve - but at the right time.

It takes so much to focus already.  And I don't want negative thoughts entering my mind.  They are difficult to turn off; especially in the middle of competition.  Right?

I am experienced enough to try and get over comments, but sometimes, well, I don't.  Sometimes they bother me too much.  I am not mentally strong during every single match I play.

It sounds so stupid I can't let things magically not bother me anymore.  But, I still have to try to get over the words quickly by rationalizing the situation.

But in this case, I lost that game, then the next, and the misses and losses kept snowballing.  People were watching across the room, I felt a lot pressure in that tournament.  It was all an unfortunate "perfect storm" of events that affected me in that match.

But, in my mind, that comment triggered it all.  Whether true or not, that's how I felt.

Oh, if I could go back to my initial thought and play safe instead..... and do what has been said a million times - "go with your first instinct."