Many people keep asking my women's team members what our plans are for next year.  Since we won the Women's Open division in the BCAPL Nationals Tourney, what exactly does that mean for us?

Do we have to play in the Masters team division?  Do we all move up?  Can we play together in the Open next year?  What?

Long story short, we are going to split up so we can play in the Open again.  How can we do that?  Read below for all the details, and also why we chose this option:

According to the BCAPL website (see page 11 here), the Advancement Criteria for the Team events is as follows:

"Players who finish as listed below in the Teams Divisions will be moved to Advanced status. Players may petition to be lowered back to Open status based on their history in singles play or known ability."


Therefore, because we won the Women's Division, all the members of my team became Advanced Player's!

We were all designated Open Player's before the event, but after placing 1st in the team event, we all became Advance Player's.

A Women's Open Team can only have one Advanced Player on their team, the remaining members must all be Open Player's.  So, if we decided to stay together, we would have move up to the Master's Women's division next year.

However, as the BCAPL stated, "Players may petition to be lowered back to Open status based on their history in singles play or known ability."

Therefore, my teammates and I emailed Bill Stock of the BCAPL and gave our individual stats of how we each placed in the singles event.  It was pretty obvious we can only place well as a team, lol, because our singles results were pretty bad.  haha!

Bill Stock emailed us back and after he looked at our individual stats, he moved us all back to "Open" status for singles.

But then he added, "As you know, only two of you may return on the same team in the Open Division. That also applies to the high finishing teams you played on in the past."

So, while we were happy we were all moved back to the Open division for Singles, it meant if we wanted to play in the Open Women's Team event, we would have to split up.

Instead of competing in the Master Division, we are indeed going to split up so we can try and compete in the Women's Open again. We just don't feel strong enough yet to play in the Women's Masters Team event.

It's very sad to have to break apart such an amazing group of women, but it's something we have to do and we will survive it.

While we already knew this rule would affect us, even as we played IN the hotseat in Vegas - that we would have to probably split up next year - and so it made the win even more bitter sweet. 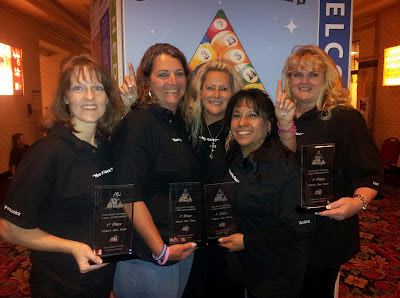 Lisa and I will stay together because we live closest to each other in Fort Worth, and Monica and Jennifer will stay together because they live in Dallas (the two cities are one hour apart and it makes for qualifying in the same league difficult). Connie had decided already not to play next year, and since we can only have two members of the team be on a team together, it worked out with 5 people.

This group of women helped me create a life-long amazing memory, and a dream come true.  I'm gonna miss playing with them.  :(  But, we are forever bonded as National Champs!