Dawn Fital was a fellow pool player who lived in Michigan.  She went missing in early June 2011, then shortly found murdered.  Her murderer (whose name doesn't deserve to even be mentioned in my blog) was finally found guilty earlier this month.

Although it's important that Dawn's friends and family finally have SOME solace that her murderer was convicted, I want everyone to remember Dawn for who she was, not "what happened to her."

She should be remembered for the awesome person she was to her friends, family, and fellow pool players.

I want her to know she is still thought of.  Still loved and cherished.  And that her friends and family miss her so much, it's unbearable for them.

You see, Dawn was not just a fellow pool player, she was a Mother of four.  I know what her kids are going through, as it's been ten months since my Mom passed and it's been the toughest 10 months of my life.  However, they had to hear and read what a horrible death Dawn received from this monster (her b/f).  I honestly don't know if her children will ever get a full nights sleep; I don't think I could.

RIP Dawn.  You are loved.  And we all miss you.  Even though I never met you, pool brought us together through the love of the game. 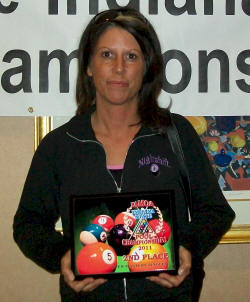