Still trying to catch up on the many blogs topics that magically entered into my two-week jaunt to Vegas in May.  :)

This year didn't pan out so well.  When I found out my boyfriend couldn't go to Vegas because of work, I asked the top shooter of my league if he would be interested.  Altho he was surprised I asked him, he said yes.

He wasn't someone who regularly went to BCAPL Nationals, but had been there before. He made plans to drive with his cousin and seemed pretty excited about the tourney, every time I saw him during the rest of the league season for the next 4 months.

In Vegas, on the Thursday morning of the Scotch Doubles event, I texted my partner to let him know we play at 7pm that night (in other words, we didn't have a bye).  That was about 10am.  I hadn't heard from him yet, and had hoped he was just sleeping in from the drive with his cousin. 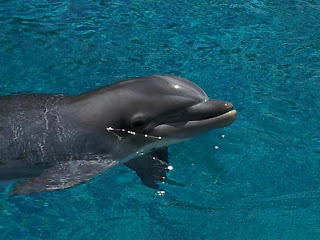 I was staying at the Mirage (one of my FAV casinos) and slept in, slowly checked out, ate one last time at the delicious buffet before moving my things over to The Riv.  I had decided to also walk through the dolphin sanctuary and check out the white tigers.  I paid my $20-something fee and went in.  I walked toward the awesome, crystal clear pool that had swimming adult AND baby dolphins (SO CUTE!).

I love to be around nature and strongly feel it provides good aura to my mental state, so I knew being around the animals out in a nature setting would be a good thing for my next week of intense play.

Just as I walked in, I got a text.  It started with, "I don't know how to tell you this...."  My partner basically told me he wasn't going to make it to Vegas.  WHAT?!   I immediately freaked out, not sure what to do.  I no longer took my time by the dolphins, even tho I wanted to, but instead hastily made my way toward the white tiger kingdom as I texted him back, hoping it was a joke (b/c he does joke a lot).

Turns out he was serious.  He had more than one family emergency that came up and pool hadn't even crossed his mind.  While, I, of all people understand family emergencies, I was still shocked I was just now hearing he wouldn't coming to Vegas the day OF the scotch doubles event.  I told him I was sorry for what he was going through.. and then started my quest.

I needed to find a partner quick; someone, somehow.  In my frantic state, I can only think of ONE guy who I saw yesterday who is here in Vegas from my league who wasn't playing scotch doubles.  I didn't even know if I could switch partners, but I had to TRY.

Several texts later, I get the guys phone number.  His name is Blas and I only know him from seeing him around, I don't think I've ever really spoke to the man before.

I tried to call him, but there was not a good signal in the Tiger section.  I moved to the Dolphin pool; nothing there either.  I had to leave.  I was there about ten minutes, but had to leave.  I then make frantic calls from the cab.  Blas said he would play with me but I had to find out from the front desk of BCAPL IF they would even allow such a chance so late.

The lady was extremely nice at BCAPL and took care of everything for us.  Blas was in!  I called him back and told him we play at 7pm.  His response was, "I'm going down to practice then."  How cute!  While relieved I had a partner, I was still trying to calm myself down from all the hassles and the rushing.

We had a TBA at 7pm and so got that win, then met back up at 9pm for our first real match.  I was very nervous for some reason and wanted to play good for him, instead of being confident like I should have.  We lost hill-hill!  Our opponents were very good, and although we played good, we lost hill-hill.

We then played at 9am.  We won at 9am and then 10:30am.  We played good together!  I was much more confident and played much better than the previous night.  However, we lost our noon match, again hill-hill.  We played good, but our opponents were also good.  Both teams we lost to placed 13th!  So, they weren't schmucks, they were really good players and made great teammates.  We gave them both a run for their money for sure.

Blas woke up at 5am and ate a good breakfast and also practiced before our 9am match.  You see, Blas is 74 years old!  The man looks like he's in his 50s, MAYBE 60s.  He exercises every day, plays pool for his income (tourneys around town), and lives on his own.  He also has diabetes and keeps it in check by eating properly and checking his blood sugars.

He had lots of great stories he shared with me and he is an extremely positive person and a very talented pool player.  Being 74, he's seen a lot, been through a lot in life, and also had a good outlook on life.  His positiveness was contagious and I LOVE to be around positive people!

I did see one other guy later on Thursday that was from our league that I could have played with.  While it was a toss up on who I would place farther in the tourney, I made the right chose because I learned about LIFE from Blas.